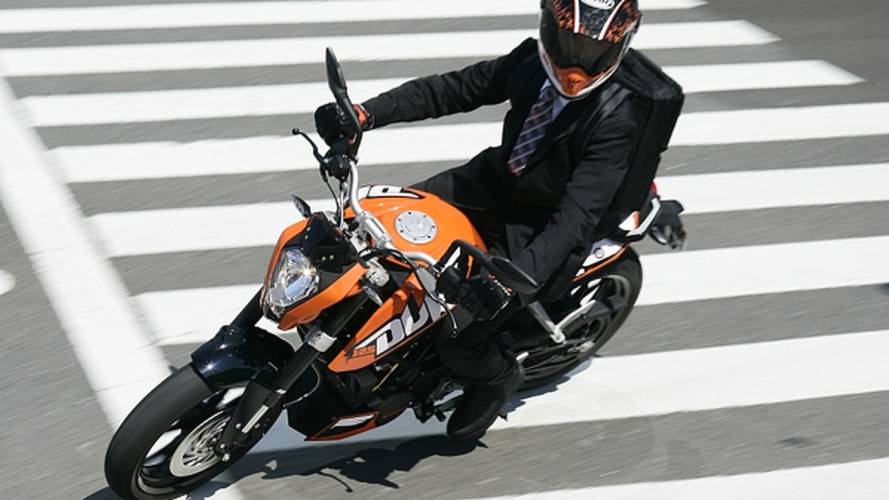 The KTM 125 Duke sets out to best dominant Japanese rivals at their own game — affordable, appealing, exciting, small-capacity motorcycles. But, unlike traditional little bike competitors, the Duke is built in India by an Austrian company and was designed for markets outside Asia. Does it have what it needs to keep up with heavy traffic outside Tokyo and lap the Sodogaura Forest Raceway?

With only 15bhp and 8.8lb/ft of torque, you are going to abuse the single-cylinder, four-valve, DOHC motor. To keep ahead of traffic, you have to go wide open throttle pretty much everywhere. But I expected the effort, not the speed that resulted. It’s easy to forget that this little boy is seriously light weight — just 282lbs.

I managed to hit 74mph on the track’s short front straight, with plenty left to go. Keeping up with traffic on Japan’s surface streets is easy. Remember, sub-250cc bikes aren’t allowed on highways here.

The inverted WP forks and monoshock, big boy dimensions and strong design make the little Duke ride and feel bigger than any other 125. Yet it still retains their nimbleness, effortlessly flicking through the tight turns on a gymkhana course while maintaining stability through sweepers. I’m typically able to find negatives in every bike I ride, but the little KTM fought off my efforts to belittle it, braking, handling and going like a real motorcycle.

KTM sees the bike being used mostly for urban commuting, with maybe some short weekend trips to the mountains thrown in. The press kit even has a photo of a Tokyo businessman riding the Duke in a suit. It’s supposed to get you around, save you some gas and park anywhere. I am, however, doubtful of KTM’s restrained intentions, with just a bit of throttle and a slip of the hydraulic clutch, the li’l Duke went straight vertical. The Brembo-developed Bybre brakes bight strongly and allow you to slide the tail around turns or lift the rear into an endo.

The only conclusion I can draw is that the 125 Duke is actually an extraction device, intended to bring out the inner hooligan in anyone that rides it. Sure, it’s a great economical commuter, but you’re buying a bike that comes in orange or purple to have the ability to play. This is definitely not a scooter.

We've extensively written about the li'l KTM and its future big brothers. Hit the KTM 125 Duke tag page for all that content.