Who the hell is Scott Colosimo? 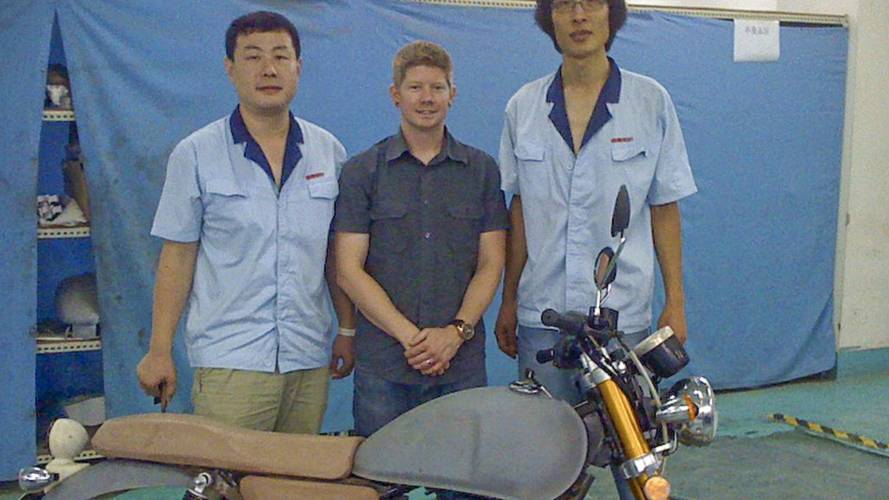 The unassuming 29-year-old in this photo is Scott Colosimo.

He doesn’t look like it, but he plans to sell something in excess of 12,000 motorcycles in the US next year. How? He’s pioneering a new wave of motorcycles designed in America for Americans, but made in China. His new cafe racer, the 250cc Cleveland CycleWerks Misfit, will go on sale early next year for just $3,195. A price that undercuts every single competitor, yet a product that looks more expensive, not less. We figured we’d start the interview off by asking Scott where he gets off sending jobs to China.

How dare you build bikes in China when Americans need jobs?

"I started looking to manufacture motorcycles when I was 27. I got nothing but resistance in my hometown of Cleveland. I had every intention to do everything there and just couldn’t get any traction. I love Cleveland, that's why I named my company after my city. Given unlimited funds and time, I'm sure we would have manufactured our bikes there.

"There’s millions in grants we went after from the government and we were awarded none of them. Since we’re using small displacement engines, we’re getting close to 100mpg, but that’s not enough, it has to be some sort of ultra-green technology that no one’s heard of, some sort of wizardry.

"Then we started to go to manufacturers, hooked up with several, but all of a sudden their lawyers got involved and said, ‘Well, is this for motorcycles? We can’t do parts for motorcycles, it’s too risky.’ The same thing with getting parts like calipers cast. ‘Oh, well this is more of an automotive part.’ But, I’m like, ‘Well you guys have the ability to cast right here in Cleveland, why can’t we do it?’ Their insurance didn’t allow them to.

"We got that sort of thing over and over and over. We had a deal with a manufacturer to bend our frames, then they found out they were for motorcycles and bailed. We tried for six months to get going in Cleveland and we started to run out of money and hope.

"It didn’t help that I’m telling people in the the midwest that I’m going to start a motorcycle company and the first thing I always got was, ‘Well, you look like you’re 16.’ it pissed me off. I would go into meetings and people would be expecting some old dude, some 50-year-old guy, to walk in. But I kind of have a baby face and the first thing people would say was, ‘Well, where’s your dad?’ It pissed me off!

"It was six months of my partner and I banging our heads against the wall and wondering how we could make this happen. So we said, ‘Fuck it’ and decided to go on a short world trip and see where we could manufacture these things.

"People say, ‘How dare you?’ but I don’t think they really understand the manufacturing situation right now. What they also don’t understand is that Cleveland CycleWerks is responsible for employing over 100 people in the US."

The secret to ensuring good quality from Chinese production.

"You get what you pay for. That’s about it.

"The consumer is the one pushing for cheaper, cheaper, cheaper. We push for better quality. Good companies only want to work with other good companies. If we find, say, a gas tank manufacturer that we’re happy with, we say, ‘Hey, do you have any other factories that you work with?’ And we go visit that factory. Are they ISO certified? What quality controls do they have in place? Can we see some samples? Can we talk to your customers? And we have our own quality control engineers over there monitoring everything too.

"We’ve investing in quality where other people only invest in making the cost as cheap as possible."

On what defines Cleveland motorcycles.

"It’s a whole philosophy of less is more. We’ve got a 250 now, we’ve got a 500cc in development, we’ve got a 450cc liquid-cooled in development and we’re going to stick to the small to mid-displacement bikes because they make more sense. We’re an all-round motorcycle manufacturer and we’re we’ll have a well-rounded range of motorcycles.

"We’re riders. We ride bikes and this is our passion. I started looking at the market and I said, ‘I really like small-displacement, four-stroke supermotos, but I have a hard time spending eight, nine grand on a dirt bike.’ I love the KTMs, but for me to spend that on a dirt bike that has some flashy wheels, it loses its appeal. So we said, ‘Why don’t we do a 250, four-stroke motard and just make it a little hooligan bike?’ It’s going to be a bike to be hooned. Then we started looking at mopeds. No one’s really addressing the moped market, so we have a moped coming out."

"My generation of riders is so different from my dad’s generation, or what I call the ‘billet-barge generation.’ Take the idea of buying an old CB350 and bolting on a couple parts. Most people our age are certainly capable of that and it’s appealing. All of our bikes have that same feeling. Stock sucks. I produce bikes knowing that they’re nice and simple and you can take them apart, you can understand them. I guess that’s what will link all the bikes in the range together, we’re going to be a fun, affordable bike manufacturer."

The market Cleveland is shooting for.

"What we’ve found is that people in the US want to ride. It’s a purchase that people are willing to make some sacrifice for, but many can’t quite make the stretch to an $8,000 price tag. Dealers are left having to stock used bikes, there’s a huge hole in the market for this.

"Instead of dealers having to sell someone a mid-‘90s bike, what if we could sell them something that’s got a 12-month warranty and dealer support? I think we can convert the dreamer into a buyer.

"That’s kind of our key, taking this person that wishes they could afford a motorcycle and showing them that they can. You can afford a cool bike that makes you feel good, it doesn’t have to be a dream.

"It’s an opportunity for dealers to get people into motorcycles and all our bikes lend themselves to customization. So, the dealer can either sell the parts to the person or it can drive service. The dealer really has a product that can generate business in several ways; the sale, the aftermarket sales and the service.

"There’s two interesting markets we didn’t think about coming into this; the step-down market and the female market. The step-down is a guy that has a 650lbs bagger and he’s saying, ‘You know what? I just spent too much money on it, $15 grand on the bike and $30,000 in chrome. I’m afraid I’m going to scratch it.’ The idea that they’re going to cross the country has faded and they just want something they can ride to the bar without worrying about someone dinging it or scratching it. I’ve also had at least six women tell me their husbands bought them Sportsters, but it’s still too heavy, still too big.

"We’ve tried to nail a demographic so we can try and market to it, but there’s no nailing it. There’s guys in their 30s who have a Harley and use the Heist as their around-town bike. We’ve got a lot of young people buying them because they’re extremely affordable. We’ve had traditional Harley shops buy them and thrown a v-twin in ‘em. But right now, our biggest demo is youth."

Sales now and in the future.

"For 2010 we’re on par for 600 up to 1,000 bikes depending on when shipments arrive. 2010 is a building year for us. We kept things small because the first year of any production run is essentially a prototype run and we didn’t want to have ridiculous orders that we couldn’t fill and we’ve occasionally needed to update a tool or change something. We set up distributors, we got all our parts in place, our bikes in place and really kind of concentrated on the product development and manufacturing aspect.

"We’ll be extremely happy with 3,000 sales for each bike, thats our goal. That’s US. We’re fairly confident that we’ll meet that. We hope to have six new models released in the USA for 2011."

"We’re essentially privately-funded and fully-funded for another three years. We thought we’d need like another $3 million just to do distribution, but the deal with PIT does that for us. It worked out so perfectly because the quality, integrity, the knowledge, everything about their organization was there. They were looking for some better product to deal with and some honest people. That’s not easy to find in this industry.

"This is the most unique industry I’ve had to deal with from a business standpoint. there’s $100 million businesses where the owner has no idea about motorcycles and then there’s the exact opposite. We’re not Honda, but we’re not going to be going out of business tomorrow.

"We’ve seen where other people have failed tremendously. All the dealer issues, having parts in stock, having a good warranty in place; a big part of it is not only making a good product, but having the support structure in place. All of that will support our projected sales. Without the support, we couldn’t have the sales."

"We’re extremely realistic about the anti-Chinese sentiment and the aversion to Chinese products American motorcycle consumers have. I don’t lie to people. There’s other companies — I won’t mention names — where I’ve been to their factories in Taiwan, I’ve been to their factories in China, but they’re saying, ‘Oh, our electric bikes are made here in the US.” Well, bullshit. If you bolt tires to the bike and you bolt handlebars onto the bike, that’s not ‘Built in the USA.’ We could say, ‘Built in New Jersey,’ we could say ‘Made in the USA,” but that’d be bullshit. Just because we bolt a few parts on doesn’t make it true.

"It’s an uphill battle. We’re an unknown brand, there’s a lot of this anti-Chinese sentiment, but we’re kind of an oddball case. We’re doing small-displacement motorcycles for the US market. The key is, our bikes are extremely affordable."

Why aren’t more people designing bikes in the US and manufacturing them in China already?

"I’ve said to myself repeatedly, ‘Either these people are aliens or we are aliens.’

"You can go to China, you can spend a week or two there, but you don’t really understand the culture. to really get into business in China, to deal with government officials, to deal with factory workers and understand Chinese life...China will either make you or break you.

"There’s at least 20 or 30 times when we could have given up. The difference between an entrepeneur and your average worker is where most people give up, you just have to say, ‘This is it, there is no fail.’"

On bringing production back to the US.

"We are trying to bring more manufacturing back to the US. All of our aftermarket parts are made in and around Cleveland. We’ve partnered with numerous small volume manufacturers and custom builders to produce parts for the Heist — everything from handlebars to suicide shifters, headlights, tailights, all that stuff — some are 20 pieces, some are 250. We’ve talked about setting up a final assembly plant here in Cleveland or in New Jersey or even California. It’s a shame we had to prove we could do it before people would work with us."

"If we can continue to, every couple of years, produce a new bike that’s kind of cool, that meets market demand and stay a low-volume manufacturing business, then we’re certainly happy with that."

"I tell people all the time that I own a small motorcycle manufacturer and they’re, ‘Oh, like OCC? You’re building bikes in your garage.’ No, absolutely nothing like OCC."