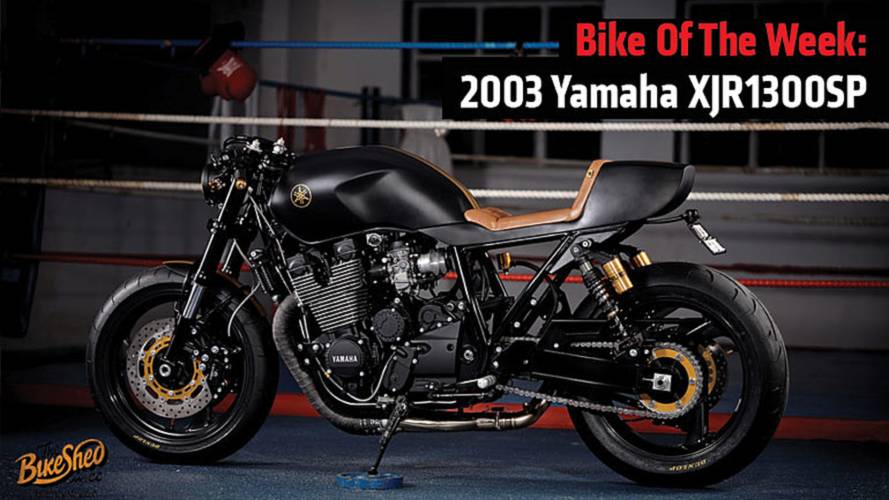 Every generation leaves something behind. Something that the next generation wishes they could have been apart of or even help put into motion. What's old is new and in some cases you want your new thing to look old. Or at least as old and as iconic as you can make it. We all want to build something that makes us wonder why in the hell didn't the manufacturers produce something that in the first place. Enter the ItroCkSBikes! 2003 Yamaha XJR1300SP.

The bike was taken to ItroCkSBikes! founders, Osvaldo Coutinho and Alexandre Santos, by a close friend of theirs who was looking for a few minor upgrades for his Yamaha. After looking the bike over the duo told their friend, “if we put our hands on (your) bike, in the end (you're) going to get a new bike…"and so it was! Their inspiration started by observing their friend's passion and career in the aircraft industry. The iconic stealth fighter was used as a reference point and the two began to create its two-wheeled doppelgänger.

As fate would have it, flat black planes and an aggressive forward tilt of the aircraft can all be found on the finished bike you see before you. The donor bike sacrificed for the greater good was in excellent order and many original parts remained in working or in good enough cosmetic order to make it on the final product. As with any project bike a good foundation will only help you later on down the line.

Up front, Kawasaki ZXR upside down forks were mated to the frame. “We had to fabricate aluminum CNC 3D adapters for the calipers and axles for the wheels and steering column.” The brakes and Ohlins rear shocks had to be refurbished and refitted in order to keep the bike in that "new" category the duo promised to their customer.

The powerful engine received a cosmetic coat of matte black paint to keep with the stealth theme and every bolt was replaced to stay in step. A small high performance oil cooler also de-clutters the mill.The original air box was removed and the crew designed their own set of velocity stacks with built-in filters. The exhaust is a titanium unit that beneath its thermal black wrap flows from four into two into one. The carburettors were retuned and re-jetted to enable more free flowing performance.

The tail unit was hand crafted in metal to reflect the shape of the tank and flow seamlessly with the baseline. It was then fitted with a luxurious hand made carmel leather seat. Other bespoke fabricated parts include the foot pegs, front and rear fenders, and dashboard mounts.

The obligatory stealth matte black paint scheme is paired with classic gold stripes and components like the bar ends, brakes and Ohlins, are meant to draw in onlookers or other envious riders. Not every stealth inspired machine needs to be murdered out and with a few simple details like the ones the ItroCkSBikes! put on this Yamaha are truly captivating.

See the rest of their machines and keep yourself distracted from the football at their own Bike Shed Page.