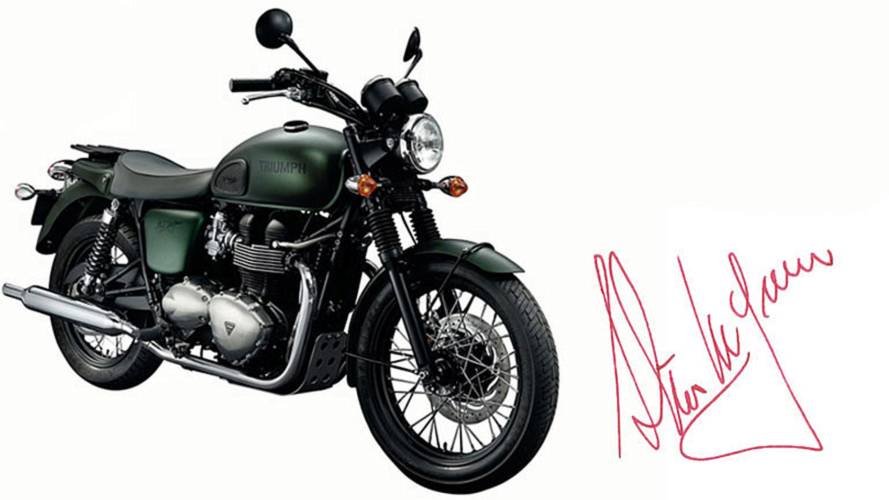 Triumph, Would You Please Stop Exploiting Dead People?This is the Triumph Bonneville T100 Steve McQueen Edition. It’s exactly the same as every other...

This is the Triumph Bonneville T100 Steve McQueen Edition. It’s exactly the same as every other Bonneville, except for the presence of a signature on the airbox cover. That’s a fake signature, because the guy that is said to have made it is dead. Well, dead as in physical reality, he’s-under-the-ground, but you wouldn’t know that for Triumph’s shameless exploitation of his name.

In that movie, some actor who happened to ride jumped an old Triumph over some barbed wire. It was supposed to be a BMW. It wasn’t actually that actor who did the jumping. But, he was really, really, really good looking, so everyone just ignored that he had a drinking problem and beat his wives (yes, plural, asshole) and instead decided to fetishize his existence into something excessively manly. He was used in some car commercials, that movie became famous again and an otherwise really cool bike brand from Britain licensed his name a few years back.

Until now, they’ve just stuck some t-shirts with his face on them in dealers, but now they’ve made a bike with his name on it. It’d be a lame special edition anyways, as it’s just paint, but the signature just seems to devolve the whole thing into something crass. Honestly, does the bike world really need HFL to tell it this shit? Look in the fucking mirror. You make good bikes, there’s no need to stoop to this.