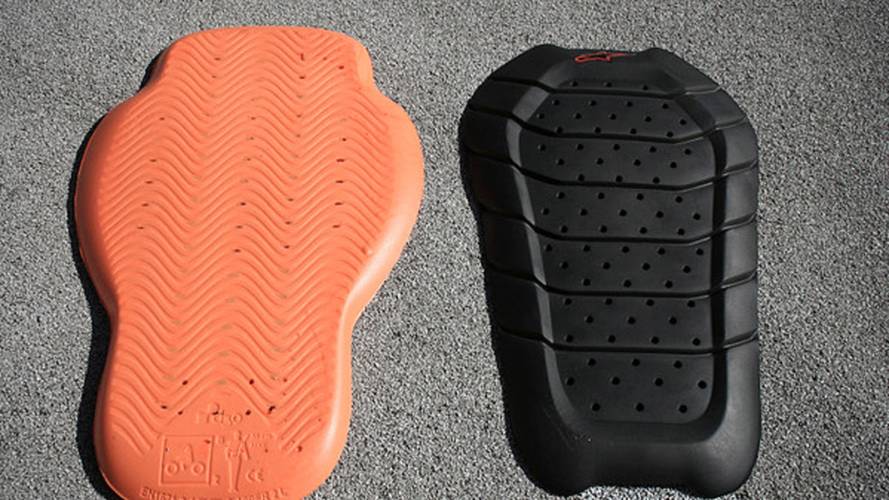 D3O impact protection explainedMade from a patented polymer who’s molecules flow freely at rest, yet lock together when impacted, D3O is one of the...

Made from a patented polymer who’s molecules flow freely at rest, yet lock together when impacted, D3O is one of the most exciting innovations in protective gear in the last decade. First used at the winter olympics in 2006, it’s only just begun appearing in motorcycle gear, most notably in Klim adventure touring suits and in Icon Stryker Field Armor. Its unique properties allow it to be unprecedentedly slim and flexible while still offering CE-certified protection, which we thought would make it perfect for our little project to make ourselves stylish, yet safe motorcycle jackets.

We’ve been playing with a whole mess o’ D3O protectors, from basic 13mm thick, contoured shoulder and elbow armor to the same equipped with hard plastic panels to protect from penetration to CE Level 1 and CE Level 2 back protectors.

Explaining the way D3O works is really simple, even if I have no idea how it actually does what it does. It doesn’t go hard when impacted, the force is simply spread across a wide area. So you’re still getting good absorption. The active ingredient is actually a liquid that does turn hard, but, in its production form, that liquid is set into a foam that remains pliable. Because it can spread impact forces across a large area, it can afford to be thinner, absorbing the same amount of energy in a slimmer package than traditional armor or more energy if its the same size. The actual chemical makeup and sciencey stuff is like the recipe for Coke, a secret.

Check out these pictures of a CE Level 2 D3O Viper Pro Back Protector compared to a CE Level 1 Alpinestars Bio Armor Back Protector. At 18mm thick, the D3O protector is approximately the same size and weight as the Bio Armor and covers pretty much the same area. Yet, the D3O protector is CE Level 2, meaning it transmits approximately half the force to the wearer as the Level 1 Alpinestars. If you’re trying to build in protection without bulk, that’s simply amazing.

It’s not that the Alpinestars protector is a bad product. In fact, it’s the opposite, it’s outstanding in its affordability ($30) and comfort. That D3O is able to double the protection of an excellent product from such a progressive company is indicative of the possibilities this material offers.

Yet, there’s a reason I opted for Alpinestars Bio Armor in my Vanson AR2 instead of the D3O protectors. In the elbows and shoulders, the Bio Armor covers a larger area and, due to Grant and I’s limited sewing skills, the way more dense, rubber-like material of the Bio Armor made it easier to work with. In fact, we’re probably not going to end up using any D3O shoulder or elbow protectors in the project at all, it requires very specific placement because its quite small and a pocket (sewing thread through it would cut the material). Things that surpass our ability as sewing numpties.

D3O is still a young company and its products are still developing. While the material is simply amazing, the forms it’s been taking so far are a bit hit and miss. Rather than capitalizing on how thin and flexible the material is and expanding its area of coverage, D3O is making its protectors to fit into existing armor pockets. In that role, D3O doesn’t really excel. Traditional motorcycle jackets aren’t cut to take advantage of its slimness and, in that slim configuration, it doesn’t offer any more protection that standard, bulky armor. We’d much rather see far thicker armor that could offer increased protection in the same size as traditional armor for normal motorcycle jackets and entire garments developed around D3O to take advantage of its form factor. For instance, you could have it line virtually the entire forearm, wrapping almost the whole way around the arm, and it wouldn’t feel that different from a normal leather jacket or need to incorporate bulkiness in the elbows.

As it is, I’m using the D3O back protector in place of Level 1 protectors in my normal bike jackets to take advantage of its light weight, flexibility and added protection. I could do so much more if the other protectors would have been a bit larger. It’s our hope that, as the company matures and awareness of the material increases, they’ll work with gear makers to create jackets, pants, suits, etc that can take better advantage of what they’ve invented. This could change the motorcycle gear world if it’s done right.