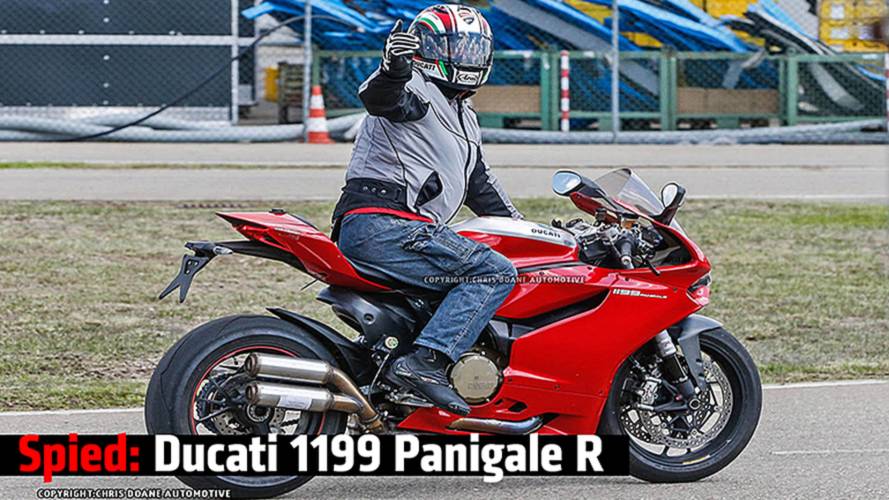 We spy with our little eyes...

Look at what we spied this past Monday, July 28th - it's the new 2015 Ducati 1199 Panigale R leaving one of Ducati's European facilities.

As you can see, the Ducati engineer who was riding the bike wasn’t too happy with the photographer. He wagged his finger once, made eye contact, and then throttled down to avoid more photos. Too slow, Junior, maybe next time.

We’d seen photos of the bare-skin, carbon-fiber Ducati earlier this year and spent some time speculating on exactly which model it would be. It appears, but of course it's not confirmed, that this is the 2015 R.

Unfortunately we can only make estimates on the visual appearance of the bike and limited on technical specs. The only technical thing we can decipher is the front suspension. The Öhlins forks are ditched for a set of Marzocchi front forks. Which comes as no surprise as other Ducati models already made this switch - as the Monster features  43mm Marzocchi forks and the 1199 Panigale (base model) features 50mm Marzocchi forks. We’d assume the rear suspension has also been swapped for Marzocchi as well. Would this bring the price down?

Want to know what won’t bring price down, those weight saving carbon-fiber fairings. Earlier spy photos we've seen show the bike MIGHT feature a full carbon-fiber body and an aluminum tank, so we'll have to see. That said, the Panigale is already the lightest bike in the Ducati fleet at 417 pounds wet.

The photographer suggested the wheels and tank are updated, but from what we can tell, they don't appear to be any different than what's on the 2014, for the R model that is.

Don’t worry, those dual exhaust cans probably won’t make production. It looks to be a shoddy bracket made from a vice temporarily mounting the slip-on pipes. The device behind the rider’s heel hints at emissions or noise testing, although one of our emissions experts said they'd never seen an analysis device that small, but hell, it is Italy...

The rear carbon-fiber piece that covers the exhaust loop under the seat, looks to be smaller and have a different shape than last year’s model.

Do you spot any other differences? Do you think the Marzocchi suspension will hurt or help the Ducati’s performance? Comment below.