Five reasons why the 2012 Honda Crosstourer will suck 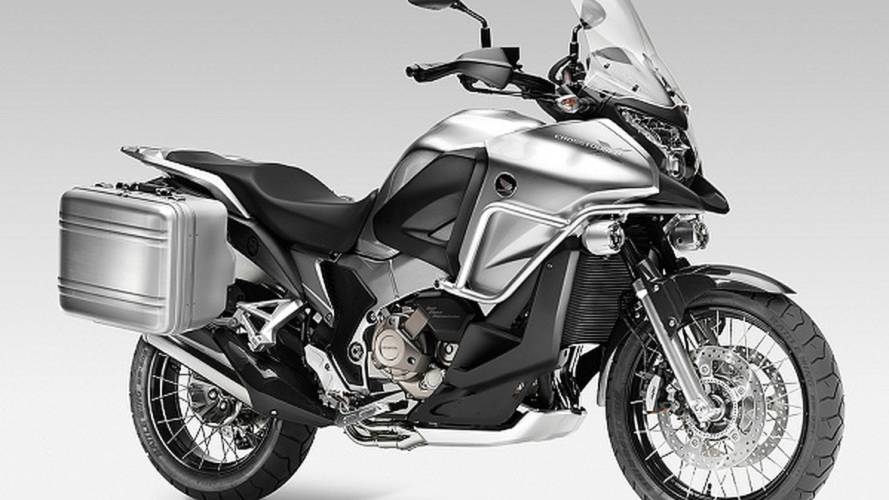 Because nothing says “Adventure” like a complicated V4 engine, fragile technology like a dual-clutch transmission and a 591+ pound curb weight, the Honda Crosstourer concept is being turned from ungainly concept into a years-late-to-the-trend production model. Brenda Priddy captured these images for Edmunds. Unveiled last year at EICMA, the Crosstourer Concept was essentially Shamu on stilts...

Because nothing says “Adventure” like a complicated V4 engine, fragile technology like a dual-clutch transmission and a 591+ pound curb weight, the Honda Crosstourer concept is being turned from ungainly concept into a years-late-to-the-trend production model. Brenda Priddy captured these images for Edmunds.

Unveiled last year at EICMA, the Crosstourer Concept was essentially Shamu on stilts. Same frame, same V4, sam DCT transmission (which will probably be an option). These spy photos appear to show a bike which faithfully carries over those mechanicals and those abbreviated adventure looks.

Converting a motorcycle which combines the performance of a touring bike with the comfort of a sportsbike to pay lip service to some fictional off-road ability are a BMW GS-style wire wheels on the single-sided swingarm/shaft drive, a GS-style abbreviated front mudguard, a new exhaust that’s wayyyyy less ugly than Shamu’s and upright handlebars.

Get the feeling that we’re less than enthusiastic about this bike? Well, having spent significant amounts of time riding adventure tourers off-road and more time than we would have liked on Shamu, we’re just not seeing a motorcycle that makes a terrible lot of sense. To make this easy for an industry unused to anything but glowing praise, let’s detail the issues here individually:

2. It’s going to be too complicated.

A high-tech V4 and a fancy pants transmission are all well and good on a road-going sport tourer, but they’re something else entirely in a bike that’s meant to carry its rider to the back end of beyond. If one of the above goes pop somewhere in Africa or, heck, rural America, how the hell are you going to fix it? We’re not implying unreliability, we’re implying that adventure bikes go down, sometimes a long way from the nearest Honda dealership.

Sorry Honda, but you’re continuing your recent trend of entering segments once they’re already over. Long Way Round aired for the first time all the way back in 2004. Eight years later (this is a 2012 model), the market is saturated, literally every single bike company, including Ducati and soon Aprilia and MV Agusta, is making an adventure touring bike. All these feature-heavy, very expensive motorcycles were conceived back before the motorcycle market changed forever with the end of free credit in 2008.

4. It doesn’t do enough to distinguish itself.

Literally every possible sub-segment of the adventure touring market is already occupied, typically by several bikes. The F650GS is bum-basic and affordable; the Triumph Tiger 800 is an F800GS, but English; the Yamaha Super Tenere is an R1200GS, but Japanese; The Ducati Multistrada 1200 is expensive, fancy and fragile. Will a V4 and a transmission that we’ve already established is neat, but doesn’t make a compelling case for itself when shifting a sequential motorcycle transmission is already very easy, be enough to make the Crosstourer stand out?

5. Shamu was not a good start.

Ignore for a second the controversy we caused by publishing an impartial review and instead look at the VFR1200’s biggest problem: poor fueling. Now imagine trying to navigate an off-road obstacle on slippery gravel while using faux knobbies as the 591lbs bike surges and stutters on constant throttle in first gear. We can feel your sphincter tighten through the computer screen.