Is Yamaha developing a production Tesseract? 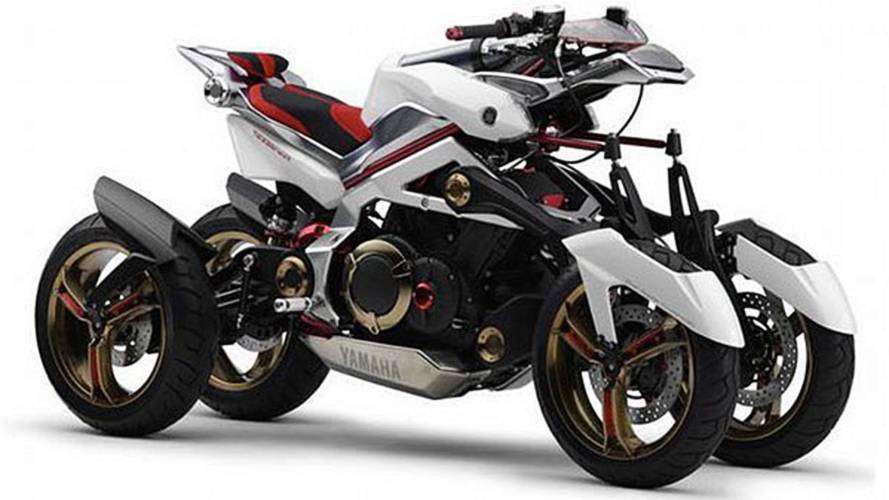 What's Yamaha building in there?

New patent filings dating from earlier this year seem to indicate that Yamaha is pursuing development of the bizarre four-wheel Tesseract concept. First unveiled in concept form at the 2007 Tokyo Motor Show, the Tesseract was shocking not only in its leaning four-wheeled configuration but also for its completely unconventional styling. These patents are unusually detailed, suggesting that a production model could be imminent.

THIS IS WHAT YAMAHA WAS BUILDING IN THERE

The Tesseract concept utterly lacks the anthropomorphic face that defines most motorcycles, instead pushing visual emphasis to the four wheels and spindly suspension components. That makes it more weird and futuristic than its configuration merits. It looks more like a futuristic robot death spider than un-intimidating, utilitarian transportation, which is what a production bike would likely be. Like the Piaggio MP3, the extra wheels will lower the barrier-to-entry for car drivers looking for an easier commute, while the leaning suspension and slim profile will deliver motorcycle-like performance and practicality.

This patent shows a vehicle that differs from that concept not only in its engine—which has ditched the v-twin for a parallel-twin—but also in its suspension configuration. Shaft drive replaces chains, moving the rear swingarms outboard of the rear wheels. This reduces their width and simplifies the drivetrain. At the front, a BMW Telelever-type configuration is employed, with a single A-arm and monoshock supporting uprights for both wheels. This also reduces complication and width.

Those shafts are essential to making this a production reality. No two chains are identical and would wear and stretch differently, requiring independent adjustment of the rear wheels. If those wheels got out of alignment, the thing would be terrifyingly dangerous to ride. If the chains had different tensions, drive too them wouldn’t be delivered evenly. Without those shafts, this thing wouldn’t be rideable.

Sean’s seen the concept bike in person. “To design a 4-wheeled motorcycle-that's really what this is-Yamaha had to overcome some pretty ridiculous engineering challenges,” I made him tell me. “In reading just the background of the patent, it becomes clear that this machine was built with speed and performance in mind. They redesigned the shaft drive completely and came up with completely new suspension systems. I remember when I first saw it in person at the Laguna Seca MotoGP in 2009. At first, I thought it was just another lame show bike with ridiculous paint, a styrofoam motor and a lot of fluff and mirrors making up everything else. Then, I got up close and took a long hard stare at it. I realized that what I was looking at wasn't a model of some interns DMT trip, but actually a well-designed machine with real components, that could actually be ridden and likely, ridden very fast.”

There is precedent for such a vehicle, just don’t expect to see it in America: that Piaggio MP3 and now the man responsible for that design has also developed a four-wheeler with the same concept, the Quadro 4D. The whole idea is to create a more stable vehicle that’s less likely to topple new riders over, without compromising the ability to lane split or to take corners. The extra wheels also give these vehicles a legal loophole, allowing people in some European countries to operate them on car licenses. Sadly, US laws tend to prevent four-wheeled bikes from being used on roads here. In a country where lane splitting is illegal in all but one state and license loopholes for vehicles like this don’t exist, they wouldn’t really make sense anyway.

So what does this patent mean? Well, at the very least, Yamaha has continued development of the Tesseract concept. Where that vehicle was essentially a flight of fancy, these drawings show that the company has been spending time refining its general theme into something that looks like it could be cost-effective to produce. Patents for motorcycle technology are typically filed for an individual component—a new suspension configuration or a new gearbox, for example—not a whole machine and certainly not in this level of detail, exposing the engine, frame, front and rear suspension, etc. This development will have cost Yamaha a significant sum of money at a time when non-essential budgets are being slashed. Does all that add up to evidence that this thing is going into production? Well, you be the judge of that.