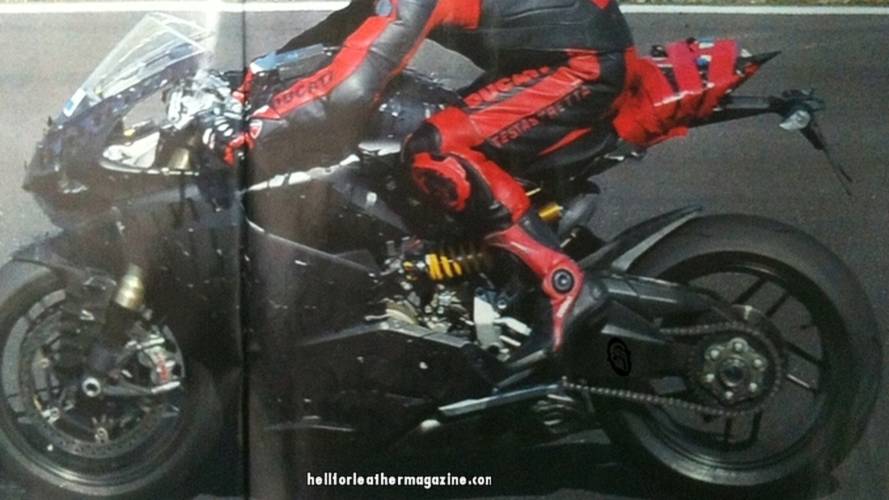 Yesterday, we brought you the very first image of the 2012 Ducati superbike testing at Mugello in SBK trim. Now, here’s the first picture of the production machine that will hit dealers next year. Make no mistake, this is going to be a radically different motorcycle to the current 1198, just check out the under-engine exhaust, horizontal shock, lack of a traditional steel trellis frame and tiny ...

Yesterday, we brought you the very first image of the 2012 Ducati superbike testing at Mugello in SBK trim. Now, here’s the first picture of the production machine that will hit dealers next year. Make no mistake, this is going to be a radically different motorcycle to the current 1198, just check out the under-engine exhaust, horizontal shock, lack of a traditional steel trellis frame and tiny proportions for evidence.

Update: this is a scan from MotoSprint.

That this bike is imminent has been known since last year, when Ducati unveiled it in secret to select dealers. From that, rumors of a 20-ish horsepower gain and 20-ish kilo loss from the 1198’s 170bhp, 171kg (dry) have been spreading. The new bike allegedly achieves that radical horsepower gain — on par with inline-four liter bikes for the first time — thanks to a drastically over-square bore and stroke dimensions in its all-new v-twin.

Facing strong competition from new quarters — BMW, Aprilia and MV Agusta — as well as stronger-than-ever liter bikes from the Big Four, Ducati has to deliver with this new bike. Superbikes form the heart of the image Ducati uses to sell t-shirts, wine, jump drives and cruisers. If it allows the perception of their superiority to corrode, then that image, and their ability to sell Diavels, goes with it.

In maintenance of that perception, it looks as if Ducati will be re-entering SBK, a series that had come to define the brand’s success, but that it quit last year. The motorcycle spied yesterday was being ridden by racer Danilo Petrucci during a race team test and was equipped with SBK-level components. The bike you see here is clearly equipped with more production-level brakes and suspension and is even equipped with lights and turn signals.

Ducati’s “ghillie suit” camo does a surprisingly effective job of masking the new motorcycle’s lines, but that can’t stop us from identifying individual components.

Ditching Ducati’s traditional underseat configuration in the interest of mass centralization, the exhaust moves under the engine Buell or KTM-style.

Also departing from brand hallmark, the shock is no longer vertical, but rather horizontal and side-mounted. It appears to be equipped with a remote reservoir. This arrangement likely aids cooling, along with allowing a longer single-sided swingarm for improved traction. Kawasaki, which uses a similar arrangement on the new ZX-10R, also claims it delivers smoother, more linear action across the full range of movement.

This is a Ducati GP9, note the carbon monocoque front and rear subframes instead of one large, traditional frame running from the swingarm pivot to head stock.

That arrangement and location of the shock is made possible by the evident lack of a traditional steel trellis frame. It’s heavily rumored that this bike will use a similar “frameless” monocoque configuration to Ducati’s MotoGP bikes, which see small carbon subframes hung off the front and rear rather than one large single frame connecting the front and rear suspension.

Another huge departure from Ducati tradition is the lack of a square, flat-sided fuel tank, replaced instead by a hump-backed, round tank that looks more like that of a Ducati Monster than it does a 916 or 1098. That might not sounds like such a big deal to non-initiates, but that tank shape completely altered the way in which you interacted with those bikes. You'll be able to hang off this new Ducati without completely re-learning your body position.

We can also see an incredibly small, incredibly pointy tail section which looks to be even less pillion-friendly than that of the Aprilia RSV4. In fact, this new Ducati’s overall proportions are strikingly reminiscent of that Aprilia; while the riding position looks relatively spacious, everything outside that peg/seat/bar triangle is pared to an absolute minimum. Note how the top of the screen barely clears the height of the tank, leaving virtually no room for a rider to tuck behind it. That’s a problem we hear test riders are experiencing on the track, where this new bike is actually less aerodynamically efficient than the 1198, with a rider onboard.

There’s also talk of the v-twin being canted back a few degrees to allow a shorter wheelbase, something which would seem to make sense from these photos, which demonstrate minimal clearance between the fairing and front tire when the bike is on the brakes, as it has been in both spy photos.

Notice anything else from this new photo? Tell us about it in comments.

Thanks for the tip, Isaac.