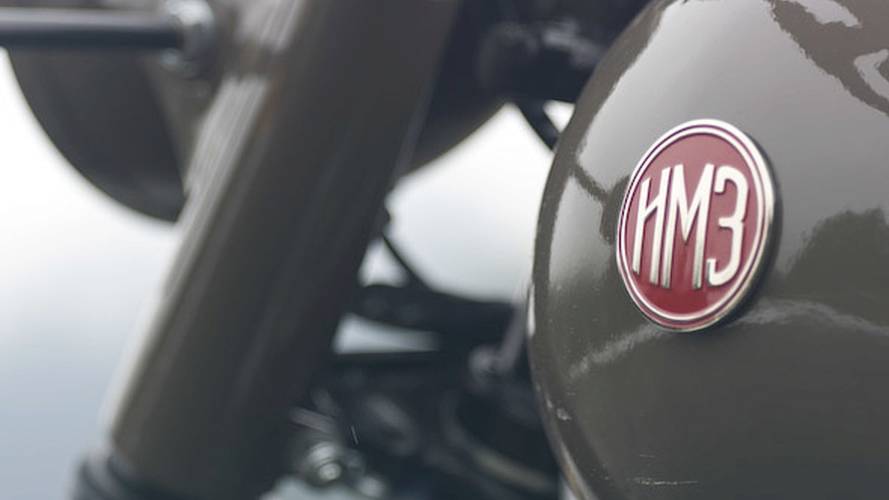 Ural is launching 2 new 70th anniversary limited edition M70 models that pay homage to the M72, the first Ural. Only 30 of the anniversary M70 sidecars will be built and an even tinier run of 10 M70-Solo anniversary bikes will be produced. To be clear, the M70 is not so much an all-new machine as it is a repurposing of the older and somewhat clumsy model known as the “Retro” cruiser. Much like...

Ural is launching 2 new 70th anniversary limited edition M70 models that pay homage to the M72, the first Ural. Only 30 of the anniversary M70 sidecars will be built and an even tinier run of 10 M70-Solo anniversary bikes will be produced. To be clear, the M70 is not so much an all-new machine as it is a repurposing of the older and somewhat clumsy model known as the “Retro” cruiser. Much like the proverbial ugly duckling, the transformed M70 is a beautiful statement of elegant simplicity and magnificent details. All the Anniversary M70 sidecars and M70-Solos have already been spoken for by dealers, so you’ll have to chase one of them down to get a bike. The 30 M70 will cost $14,200 and the 10 M70-Solo are $9,150 each. Waking to the back of the building just outside Seattle where all the bikes are assembled, Madina explains that the machines set aside for me to ride are both prototypes. At first, Madina has me worried that I’ve come to Seattle only to get stuck on boring paved roads. “Grant, this bike is not like sT or Patrol, where you go crazy on the dirt roads in the mountains. The M70 and M70-Solo is longer, lower. You know, like a cruiser, is very stable and really great for going down the highway.” Even though the M70 models sport a rather long 61.8" wheelbase, ground clearance of 5.9" and a low seat height of 29.5" I notice both the bikes are sporting 18” aluminum rims with the same beefy tread as the Ural sT and Patrol bikes, which is a little odd for a highway bike. Then she tells me that I get to have my way with both the M70 and the M70-Solo. She’s barely finished the sentence and I immediately text Thor Drake from See See Motorcycles down in Portland to see if he’s up for bombing around on the top secret Ural cruisers. Naturally, he replies “Fuck yeah, I’m into it.” Rickety cruisers on HFL, what?! Whoa there, fellas. You can stop shaking your style-over-function skinny fists right now. For the still-uninitiated, don’t let Ural’s industrial age rugged good looks and side-mounted optional kickstart fool you. The M70 is surprisingly jam-packed with modern features that include 40mm Marzocchi forks hidden under those rubber boots, dual adjustable Sachs rear shocks, a fully floating 4-piston Brembo on the front 295mm disc along with a fixed 2-piston Brembo on the 245mm rear disc, steel braided brake lines, twin Keihin L22 carburetors, plus a fully electronic ignition and start. Not to mention a completely non-CCCP contemporary wiring harness and tightened tolerances throughout the chassis and engine. Though not as powerful, the 453 lbs. M70-Solo is also lighter than Triumph’s Bonneville range. Okay, you all better now? Good.

It’s no secret that I love Ural. Who knows, maybe it’s the knowledge that the machines are still produced by hand in the same factory since November 14, 1941, when the Ural project was transplanted to Siberia to protect it from the Nazi invasion and the first sidecars to leave the factory were christened during the battle of Stalingrad. Maybe it’s the way today’s Urals remain old-world hand-built steel tanks, capable of going just about anywhere. Or it could be that I’m in midst of going quietly off into that land of middle age, yearning for tokens of an era I desperately want to believe was cooler than it really was. But those are all secondary to the fact that I always have boatloads of fun sniffing out adventures on a Ural. Unlike Wes, I even manage to do it without breaking myself. At least, so far. Heading to the hotel, the first thing that I learn is what Ilya and Madina call a “cruiser” is not what I consider a cruiser. The low-slung 745cc boxer twin is butter smooth as usual, allowing the bike to handle corners and the Brembo brakes stop the M70 like a modern bike should. The M70's beefier swing-arm makes the bike definitely more stable than the Patrol or sT. Plus there’s those beefy tires. By the time I get from the factory to the hotel room, I’m thinking about ways to get in trouble and realize Thor and I would benefit from a local guide. Then I remember that Andy Gregory from Man’s Gotta Do lives in Seattle and immediately put out a message to see if he’s bored for the weekend.

The night passes while I pore over Google maps. The three of us meet in the morning at the factory and Thor sneaks his trusty old Red Ryder BB rifle under the sidehack’s beautiful canvas cover that Ural commissioned to be hand-stitched by a tiny one-man shop in Irbit, just outside the factory. The canvas is also used for the sidehack’s standard shovel that’s mounted on the side. Madina seems a little worried, Ilya is smiling like he knows we’re up to no good. Madina looks at me very sternly in a nervous, motherly kind of way. “Grant, please, whatever you do, don’t crash like Wes.”

Less than two hours later and the three of us are at Snoqualmie Falls, home of the lodge famously featured in David Lynch’s Twin Peaks. We hop on I-90 East heading for the Tinkham Road exit, close to the Snoqualmie Pass. Andy is on his XR650, Thor is riding the M70-Solo and I’m taking up the rear with the M70. While we’re fine in the beginning chugging along at 80mph, I quickly learn the sidecar is only good for about 65mph on steep inclines. Off to the slow truck lane for me, but otherwise all is well enough and I catch up at the exit ramp. Take the exit, turn left, hit the dirt in less than a quarter of a mile and don’t slow down. Oh, wait. We’re on cruisers so we should go slower and not die. But these are Ural cruisers, so we should go faster. Yes, faster goddammit! Faster! Huzzah! Faster up the mountain until our fingers are freezing, until we ride into the low hanging clouds, until the machines and our boots and our leathers are covered in dark mud spray and mist. Drifting the rear tires through the steep gravely switchbacks and up the winding stretches along the cliffs that look out into a wall of sprinkling white as the crystallizing condensation pecks at our visors.

Thor and I are both spontaneously singing in our helmets. These M70 Urals aren’t cruisers, they are the kind of primordial adventuring motorcycle we all dream about. The kind that requires a little manhandling if you don’t want to run off the cliff. We race up random turns and narrow passages at whim and giggle when they dead end, only to blast back down even faster in search of new routes up. We double back to untaken forks in the road leading upwards next to the steep wet rocky walls. The boxer engines boom through the straights and whine on the downshift into the blind corners before jamming the rear brake and backing the long beasts in, first in a panic as the road quickly disappears, but every corner after like a game of chicken. The ground hardens and quickly turns white with snow. We stop to eat, listening to the crack and boom of the hunters’ rifles somewhere up in the pines. Thor heats up his fingertips too fast on a cylinder, which turns into a writhing yelping song-and-dance comedy for Andy and I. Then I shoot the M70 while Andy and Thor hop on the other bikes to scout the snow-packed road leading further up the mountain. 15 minutes later and Thor comes back alone on the M70-Solo. “Where’s Andy?” Thor laughs. “He’s already busted his ass twice. That XR is so high and short, it’s just got nothing on this ice. I think he’s walking his bike back down the mountain. The packed ice is pretty gnarly up the road a bit, but this thing’s so low that it’s got incredible traction. I’m not even slipping.”

A couple of minutes later and Andy appears, grinning giantly and slowly walking his XR650 down the white road. He hops in the sidecar, cocks the air rifle for a little sport and the three of us continue up the mountain, all the way until the road ends in a snow-covered clearing surrounded by pines and the mist. We stop for more pictures and just because it’s so damned beautiful. Then the cold starts to bite and we head back down to Andy’s bike. Thor and I swap M70s and we all barrel down the dark mountain as fast as we can, laughing hysterically the whole way. The Ural M70 and the M70-Solo are obviously not bikes for everyone. For many they are still too crude for “proper” adventuring, or too under-powered, or simply not modern enough for their tastes. Thank god I’m not one of those people.
++