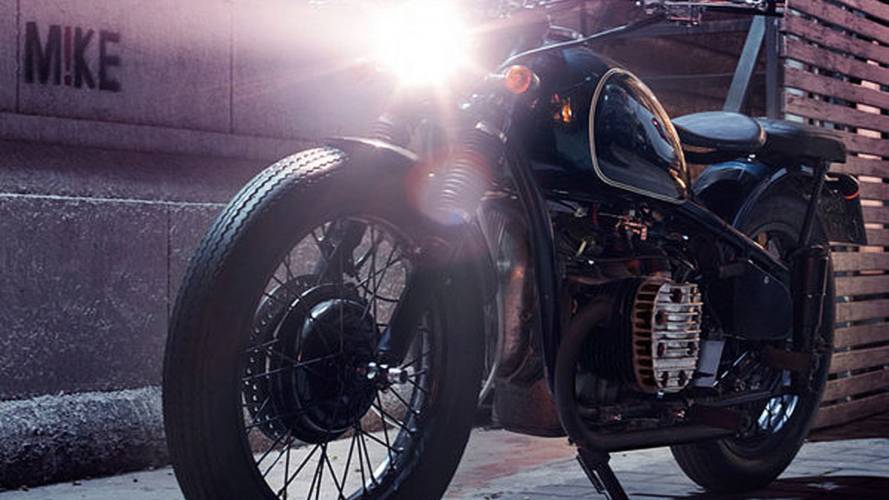 “Building bikes in China is an adventure similar to Frodo’s journey to Mordor,” says Daryl Villanueva, an art director turned custom bike builder in Beijing. Using Chang Jiang 75s — a WWII-era copy of a Soviet copy of a 1938 BMW R71 — as a base, he’s hoping to create a new style of custom motorcycle designed by and for the Chinese market. The bike you see here is the first product of h...

“Building bikes in China is an adventure similar to Frodo’s journey to Mordor,” says Daryl Villanueva, an art director turned custom bike builder in Beijing. Using Chang Jiang 75s — a WWII-era copy of a Soviet copy of a 1938 BMW R71 — as a base, he’s hoping to create a new style of custom motorcycle designed by and for the Chinese market. The bike you see here is the first product of his new company, Bandit9. Dubbed “Loki,” it’s a do-it-all standard that improves on the original in every way.

“With Loki, I wanted a more aggressive stance and simplified streamline compared to a standard Chang Jiang,” describes Daryl. “So, I lowered the frame and added large wheels with upgraded brakes and suspensions. I fabricated new fenders for Loki to expose more of the tire, trimmed the seat bracket and angled the position of the tank to streamline the bike’s silhouette. The forest green with milk pinstripe is a combination inspired from a 60s Jaguar. It’s smooth.”

“My favorite feature of the bike is the sound. Loki’s got a mean roar, thanks to the shortened pipes that were reshaped to look like a bamboo shoot. It gives Loki a lot of character.”

“Chang Jiangs were originally designed to be sidecar bikes but I didn’t want the sidecar to drag down the potential power of Loki. Now with its reduced weight, it’s surprising how powerful the bike is.”

“I’ve always been fascinated with motorcycles but my mom would never let me have one. So after moving away from home, I finally got my first bike – a 50cc Honda Cub. It. Was. Amazing.”

“Riding motorcycles, well in this case a scooter, was exactly how I imagined. It felt like freedom (and not because I was rebelling against mom).”

“I started tinkering with the Cub. The first piece of ‘design’ I ever did was to simplify the paint job and turn the bike into a solid white color. I wanted to hide the structural gaps to make it look smooth. It was a small change but something clicked inside. I went on to do larger bikes with more difficult customizations.”

“I come from an art background. I’m not an engineer. I wasn’t raised in a garage where Dad taught me to put the parts together. So my approach is naturally different. I treat the frame like a canvas and I just start doing my thing. A completely organic method. I usually decide on the attitude of the bike and stick with that throughout the build. Not everything goes as planned, especially in China, but that’s what makes the build exciting and the bike unique. It almost builds itself. And you can sense that when you look at the bike. Everything works together without effort.”

“I’m incredibly thankful to have the fusion of marketing and creative experience. I know what makes a great photo – the composition, the light, the colors, the mood etc., a quality injected in all my Bandit9 photography. But the most important piece of knowledge the advertising industry has engrained in me is the importance of branding. Everything I do, from the design of the bike to a post on the blog, upholds the Bandit9 brand.”

“Like most old bikes, Chang Jiangs need a lot of TLC but are very reliable if they get the attention they deserve. They’re military bikes designed to withstand all sorts of weather.”

“But why Chang Jiang? Two reasons:

1. Nobody customizes Chang Jiangs. Bandit9 will own this space and make it cool to ride a Chinese bike.

There’s an idea shared locally and globally that Chinese products suck. The Chinese believe that foreign brands are cooler – Harleys, Hondas, etc. I’m fighting to change this misconception by reinventing the Chang Jiang with the help of Chinese craftsmen. And I will do everything I can to make sure the world sees the talent behind Bandit9 and China.”

“I moved to Beijing because of my advertising career. The first thing I did when I arrived was look for a bike. I didn’t even have my apartment yet. But Beijing is a sea of sidecar bikes and electric scooters. I met with a few of the builders here but the extent of their customization was altering the paint-job. The bikes lacked ingenuity and personality. So I opened up my own shop – Bandit9. I created the company to show the people here the creative possibilities.

I’m not well versed in motorcycle laws in Beijing. I’m sure rules exist. But the reality in Asia (and I love this) is that the rules can be bent as long as it’s not a danger to others. Building a custom bike is not a danger to anyone. I think other governments can afford to take a few pointers from this side of the world, especially about loosening up.”

“There are pockets of beauty in Beijing - areas that will leave you in awe, if you pay attention. I don’t need the to drive 3 hours away to enjoy riding. I go for midnight bike rides and try to catch long stretches of road to myself. There’s a feeling of serenity – quite like meditating.”

“Bandit9 works with several craftsmen to achieve the unique qualities of the bike. The details are hard to replicate – in fact, I don’t even know if I can make the same bike twice. Our sources are not your typical motorcycle shops.”

“This is most evident with Magnus, the second bike that will roll out of the Bandit9 garage. The twin lights are from a hardware shop in which the bulbs were replaced to match the wattage of a standard headlight. The seat was by done by a shoemaker. He lives in one of the old neighborhoods of Beijing. I was amazed by his skill so I had a friend help me translate what I wanted.”

“It gets frustrating when things don’t go as planned – colors come back inaccurate, the leather is not to spec, the raw materials arrive 3 weeks late. I try my best to manage these aspects of the build but the people I’ve looked to for advice tell me, ‘Hey, it’s China.’”