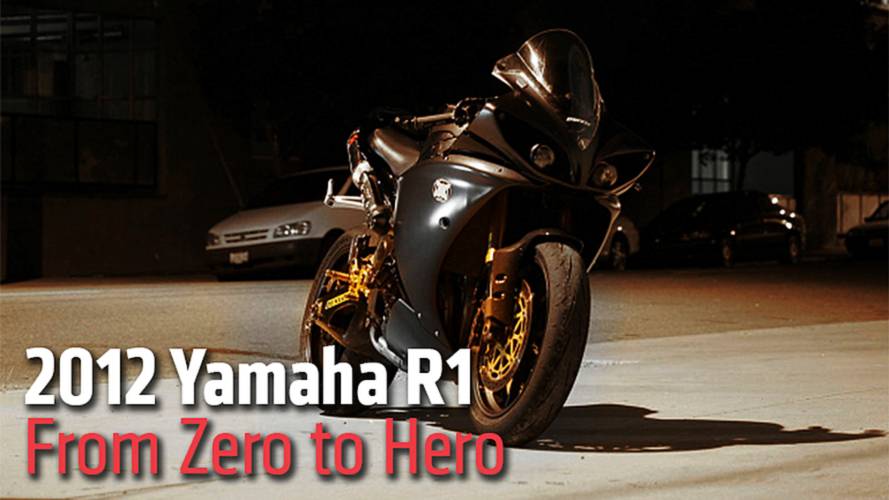 2012 Yamaha R1 - From Zero to HeroSo far as mind bending performance goes, the stock Yamaha R1 is a long way from ideal. It’s fast, sure, but it...

So far as mind bending performance goes, the stock Yamaha R1 is a long way from ideal. It’s fast, sure, but it lacks feel, smoothness, grip and ability in stock form. Somewhere beneath those bug eyed lights and angular plastics, though, is a genuine transcendental two-wheeled experience just waiting to be unleashed. Our buddy Adey found it and now uses this bike to beat Porsches and squids every Sunday at The Snake and plenty of other days at Willow Springs. Here’s how. — Ed.

Flashback to fall, 2009 and $13,000 was burning a hole in my pocket. I wanted a new bike and I wanted it before that money went on something less exciting. I’ve been on R1s since 2004; an ’02 silver/black to an ’04 to an ’05. Yamaha junkie? Maybe, but I’d always dreamed of owning a piece of Italian craftsmanship. Something built to win both races and best dressed awards. That thirteen grand was bringing me oh so close to a leftover Ducati 1198 S, but there was a problem. Yamaha chose the same year to release the M1-inspired crossplane crankshaft and I just had to have one.

European liter bike shootouts had the R1 either on top or within the top three. But, for some reason US reviews were the exact opposite, putting the new Yamaha in damn near last place. The biggest problem was apparently a lack of top end power on North American bikes, a restriction put in place to meet stringent EPA regs. The mags were impressed with the new motor’s tractable delivery, but it was getting beat down every single straight!

Thank god I don’t believe all the hype I read in those shootouts. Instead, I did my homework and found out the source of the power restriction. I was confident I could get that power back easily and that’s all it took to open my wallet. Maybe I’ll get a Ducati in 2012.

My first ride on the R1 was on a road I know all too well. The infamous Snake. That first time out, I wanted to see how different the new D-modes delivered by the ride-by-wire system really were. B-mode is suggested for times when you need sensitive throttle input. It sort of makes the R1 feel like a 600, which I find handy when breaking in new DOT rubber on the street during LA winters. Standard Mode is supposed to be just that. I didn’t feel it delivered Yamaha’s claim of “optimum overall performance, but it was the smoothest of the three modes. A-mode sharpens throttle response in the low and mid range. It does help the bike accelerate more instantaneously, but the delivery is just too abrupt to be of much use. It’s like an on/off switch. Roll on the throttle and that’s not a huge problem. Roll off and you’ll smash your nuts on the tank.

It didn’t take too many passes on the Snake to find all the stock bike’s shortcomings. The stock forks were too heavily sprung and too lightly damped, meaning they failed to deliver good feedback and struggled to keep the front wheel in contact with the road over bumps. The stock exhaust weighed as much as an entire R6. To top it off, the stock D204s sapped any confidence I might have otherwise had. Really, these tires are garbage, there’s no grip and no feel. Why Yamaha chose to fit them to their flagship performance bike, totally blunting that performance, is beyond me.

So, what to do first? I decided to put the R1 on a slim fast diet by installing the Akrapovic Evolution full exhaust system. This not only shed weight, but bumped my rear wheel dyno readings up from 161 to 166.2hp. At low RPMs, the exhaust makes the R1 sound like a V8 muscle car. Open it up fully, close your eyes and pretend you’re on an M1, they sound identical.

Next step was to find that power Yamaha chose to hide from US customers and work on smoothing the throttle response. Some smart guy by the name of Beau Braunberger from Garage Endeavors had just started promoting his ECUnleashed for this bike. A mutual friend introduced us and I allowed Beau to use my bike as a guinea pig to perfect his software. He was happy to tailor the reflash to my personal riding style too.

I pulled up at Beau’s house, removed the left fairing, pulled out the ECU and plugged it into his laptop. 15 minutes later, I was back on the bike.

Continue Reading: From Zero to Hero >>

Details of the reflash:

Keep injectors on while throttle is closed for smoother take up.

No other mod comes close to the impact this reflash had. It’s night and day. The R1 is now fast, smooth and delivers amazing feel of what’s going on at the back tire.

Next, I needed to fix that suspension. A 30mm Ohlins fork cartridge kit and TTX shock did that. That, plus the reflash turned my bike from bouncy and jerky into a focused tire shredding beast. I now have better feel and better control, plus the ability to exactly tailor the suspension to my exact riding style and weight.

With that suspension, I was also getting close to the visual appeal and handling of the 1198 S, but I didn’t stop there. Aluminum Marchesini rims really tipped the scales, making the R1 a true superbike. Steering is now effortless, requiring minimal input to turn into corners at high speed.

Other mods were smaller, but still necessary. Gilles VCR38GT rearsets fit my 6’ 3” frame on the R1. The Zero Gravity double bubble enables me to get behind the screen. HIDs give the bug-eyed R1 a more menacing glare. Harris pivoting levers proved effective during a heavy crash at The Streets of Willow, the bike flipped over a couple of times but the levers only had tiny scratches. The stock electronic steering damper feels nonexistent at low speeds, so I replaced it with a Scotts rotary damper.

Of course, I wasn’t happy with Yamaha’s graphics either. The red accents on the black ’09 bike seemed tacky, even if they’re not as bad as the fake carbon stickers or airbrushed ghost skulls on the ’11. Jack from Platinum Motorsports gave me a nice metallic matte finish on the upper and mid fairings. Black glossy air vent panels from the blue R1 were ordered, as were its gold fork externals. The end result is something I can be proud to see on Rock Store Photos.

All in, this cost me around $6.5k on top of the stock bike. The 2009-2011 R1 is not the bike to brag about in stock trim. It comes with too many shortcoming that can’t be alleviated without spending some serious cash. If I add the cost of the bike plus the cost of all the mods I installed, I could have purchased a Aprilia RSV4 Factory or new Ducati 1198 S. I’m happy with the end result which is a very focused racing machine that puts a big grin on my face every time I’m about to perch upon it.  But next time around I think I’ll settle for out-of-crate-monster. I’m not interested in searching for any bike’s true potential again, it should be readily accessible fresh from the box.

For those who feel they may be close to my size, here are my suspension settings: