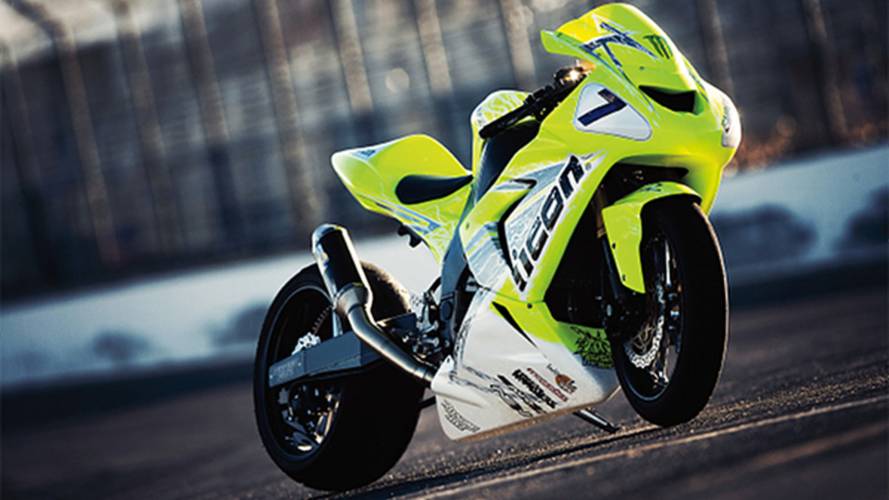 You know drifting. A bunch of 2 Fast 2 Furious types put carbon hoods on their 240SXs, then pretend to race while awarding each other style points. An impressive feat of car control, surely, but a little silly. But, what if a guy on a bike showed up — same track, same time — and beat the car guys at their own game? Nick 'Apex' Brocha did just that. Here’s exclusive photos and video. Wait, y...

You know drifting. A bunch of 2 Fast 2 Furious types put carbon hoods on their 240SXs, then pretend to race while awarding each other style points. An impressive feat of car control, surely, but a little silly. But, what if a guy on a bike showed up — same track, same time — and beat the car guys at their own game? Nick 'Apex' Brocha did just that. Here’s exclusive photos and video. Wait, you guys practiced this first, right?

“We thought it would give Nick extra motivation to twist the throttle knowing a 2,400lbs car was about to run him over.”

We asked Nick to explain how this motorcycle drifting thing works:

“It's hard to say what's the best way to start your adventures of tire smoke and highsides,” explains Nick. “But at the request of the honorable HFL crew we'll dive head first into the subject.”

“Stock wheel base bikes are not like their stretched and lethargic brethren. So while what you saw in the Icon video is absolutely possible on a stock wheel base motorcycle, the reckless abandon we had those two days of shooting would've resulted in some serious hospital time. None of the drifting shots had any front brake application, just power over heavy handed riding.”

“Now that that's said lets get you started. First things first, you should be able to do a rolling burnout. Once your comfortable with rolling and you've started to counter steer the bike into a weaving pattern you're ready to feel out a drift.  Easiest way to get your feet wet is in first gear get the back tire spinning high in the revs while rolling as slow as possible, release the brake, wick her wide open and try and keep it straight.  From there you're going to spend a lot of time SLOWLY feeding a little rear wheel angle into the bars.  Each pass you'll want to monitor your tires life and get your head wrapped around the idea of what would happen if you get above your comfort level.  Highsiding at 50+mph can really put a damper one one's weekend.”

“Drifting has helped reinvent the sport of street freestyle.  It's led to many of the riders master backing in their motorcycles and greatly improved the speed of our riding.  If you care to see more fun highside play you can checkout the following YouTube video.  The quality is not there but you'll get the idea.  Hope you enjoyed everything, it was a lot of fun to make!”

Icon equipped Nick with one of its new Variant Salvo Hi-Viz helmets to justify footing the bill for all this. As the name suggests, it’s Icon’s awesomely unique urban/supermoto helmet, just here with brighter paint and reflective graphics. Wearing his, we can be sure no one can say they didn’t see Nick’s hooning.

Meanwhile, Icon’s Matt Sanders, who produced and shot this video, explains how it all came about:

“The idea (bike vs. car drifting) is one that’s been brewing for quite some time in my own head and I’ve tossed around producing a drifting video with Nick a few times in the past. It wasn’t until Nick called me after his trip to Aruba that it really started to gain traction.(ironic pun?) I believe his voice was at least 2 octaves higher than normal as he was describing what he encountered on the Island.”

“Apparently one of the more popular night time activities for sport bike riders and spectators is known as 'Swinging.' (not the 10 guys pulling trains around a nasty girl 'swinging' mind you).  Imagine a narrow street lined with extremely rowdy people on both sides as far as you can see.. A guy on a stretched liter bike (usually in shorts and not much else) is lined up at one end. The people at the other end of the street are literally in the middle of the road just so they can see. He launches the bike at redline in second gear down the middle of the road in a giant smoky burnout. He’s throwing it back and forth in a drift from lock to lock missing the bystanders by only inches. The people are literally running out of the way to make room for the bike as it comes screaming towards them at 80-100+mph sideways. Nick said it was one of the most horrific and violent things he’s ever seen done on a bike. Naturally, his intrigue was aroused. From there it took us about a year to figure out what to do with the concept.”

“Drifting on sportbikes has been done for quite some time in the stunt world, but because of the short wheel bases they are extremely twitchy and usually limited in speed and scale of the drifts... We’re talking small parking lot sized drifts in short bursts only. There is no way a normal sport bike could hang with a real drift car at speed.  Stretching the bike changes the whole equation and makes it possible to drift (somewhat) safely at very high speeds. The first time I saw Nick drift around a corner at speed on the stretched ZX10 completely blew my mind...it was way beyond any MotoGP drift I had ever seen.”

“It truly was an experiment because none of us knew what would happen.”

What’s the deal with the R/C car cam?

“The RC cam is just an idea I had to help us get a cool angle of the action reasonably safely,” says Matt. “I don’t know if it worked as well in practice as it did in theory.  The car itself is a Traxxis Rustler VXL with a Lithium Polymer battery and brushless motor. It is capable of 80+ mph in this configuration. I figured it would be able to keep up with the bike and car no problem through the slalom course.  What I didn’t account for, was how hard it would be to see it as it got to far end of the course. Something that small going 80mph away from you gets very hard to control. You can see for yourself in the video. Thankfully, it all worked out and I will still be able to write this toy off on my taxes this year. I also got to use it on another Icon video shoot recently where it became known as the ‘perv cam’...that video will be coming out in the spring.”