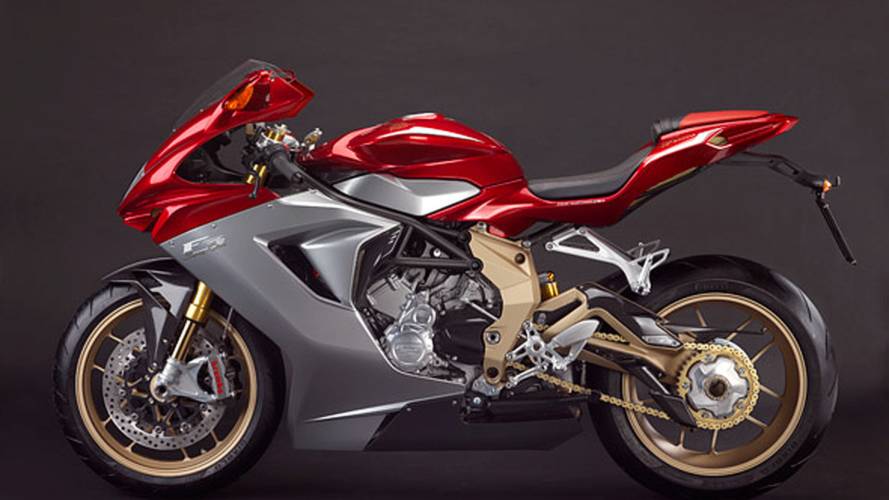 MV Agusta just released two official images of the 2012 MV Agusta F3 Serie Oro. That swingarm that Wes was hoping was magnesium? Nah, it's just paint, silly. And those wheels that Wes also hoped were magnesium? Yeah, also paint. They're actually forged aluminum wheels. Wait, so why is this thing expected to cost €24,900? Well, it does have a TTX shock and steering damper, radial Monobloc Brembo...

MV Agusta just released two official images of the 2012 MV Agusta F3 Serie Oro. That swingarm that Wes was hoping was magnesium? Nah, it's just paint, silly. And those wheels that Wes also hoped were magnesium? Yeah, also paint. They're actually forged aluminum wheels. Wait, so why is this thing expected to cost €24,900? Well, it does have a TTX shock and steering damper, radial Monobloc Brembo calipers, "Racing" discs, fully-adjustable Öhlins suspension, tig-wiedled chassis and subframe, plus fully adjustable rearsets and levers "carved from solid." Ooh, carved from solid what? Hm, that part must've been left off.

Varese, 14th July 2011 - MV Agusta can formally announce that the retail sales price in Italy of the much awaited new F3 model will be 11,990 Euros. As already announced previously, production has been brought forward by four months, meaning that the new model will be available in dealerships before the end of this year.

In keeping with the traditions of the brand, volume production of the new F3 will be preceded by a small series of limited edition “Serie Oro” versions appealing to enthusiasts of Italian engineering excellence.

These exclusive models, of which a maximum of 200 examples will be built only to special order, differ from the standard version via a multitude of details, both in terms of aesthetics and engineering.

The F3 Serie Oro is immediately recognized by the gold frame plates and single-sided swingarm, as well as the forged aluminium wheels painted the same colour. The deliberately minimalist graphics subtly emphasise the lines of the bike, as well as identifying it. The sensuous bodywork design is characterised by a special paint scheme which accentuates its shapely form. The final result is a striking reinterpretation of the traditional MV Agusta silver and red livery. Even the rear view mirrors are painted, and the seat subframe matches the colour of the F3s tubular spaceframe. The clutch cover and the frame plates are machine polished, while the alternator cover is completely milled from solid, providing these components with the hand-made feel that makes each MV unique. The attention to detail extends to the air intakes and cooling exits, which have a gold finish, as well as the DID Gold final drive chain. The completely hand made covering of both rider and passenger seats employs real leather and alcantara, giving the Serie Oro the ultimate touch of elegance. As usual with MV Agusta Serie Oro models, a gold plate mounted on the upper tripleclamp identifying each individually numbered bike, completes this picture of exclusivity.

Several mechanical parts are unique to the Serie Oro models, exemplified by the outstanding Brembo brake system, with radially-mounted Monobloc one-piece calipers gripping Racing discs. Fully adjustable Öhlins upside down forks, TTX shock and steering damper collectively represent the ultimate in suspension. The spaceframe chassis and seat subframe are TIG-welded, guaranteeing a strong, stiff structure and a highly refined aesthetic appearance. With the objective of allowing each rider to optimise the riding position, the footrests and their mounting plates are machined from solid, and are fully adjustable, as are the gearchange and rear brake levers.

The F3s carbon fibre components add a unique richness to the bike. The front and rear mudguards, dashboard cover, airbox side and intake covers, fairing inserts, both upper and lower chain guards, swingarm protector cover, sprocket cover, fairing lower, and stacked exhaust outlets are all manufactured in this lightweight, good- looking material, each one carefully manufactured and covered with a transparent protective finish.