Eric Bostrom and JD Beach on racing Kawasakis at Daytona, learning to swim and the trouble with healthcare 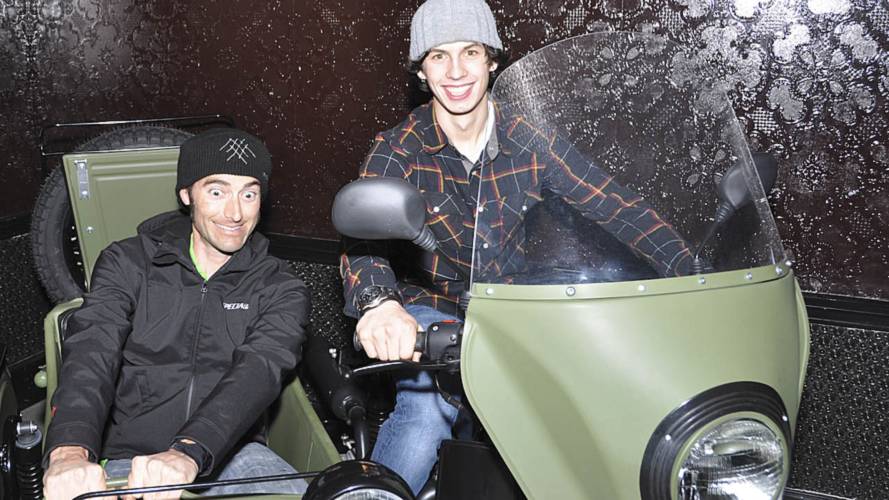 Flying to New York straight from their first test at Daytona with Team Cycle World Attack Performance last week, Eric Bostrom and JD Beach took the time to take me out for Sushi. We talked about racing on a banked NASCAR track, the 2011 Kawasaki ZX-10R, Eric’s gnarly leg injury (gross pic below!) and a new era of motorcycle performance. In an age of over-managed athletes, it’s nice to know the...

Flying to New York straight from their first test at Daytona with Team Cycle World Attack Performance last week, Eric Bostrom and JD Beach took the time to take me out for Sushi. We talked about racing on a banked NASCAR track, the 2011 Kawasaki ZX-10R, Eric’s gnarly leg injury (gross pic below!) and a new era of motorcycle performance. In an age of over-managed athletes, it’s nice to know there’s two racers still prepared to shoot the good ol’ shit.

Eric: “Before, the banking was slippery and you’d just spin the rear tire out of the chicane, you’d spin the tire in every gear and that was the limiting factor on speed, you just couldn’t get the drive grip to really accelerate. Now the scary thing is that you’re pushing the front for hundreds of yards, at barely half throttle. I liked it better with the bumps. Come March, I’ve got to figure out how to go wide open.”

“I remember riding the Harley-Davidson there, the 883, and you actually had to countersteer just to hold it on the banking because it just didn’t go fast enough. In sharp contrast, with the banking repaved, you wish it was steeper because it just feels flat. But the wall is still right there.”

JD: “I got close to the wall a few times. I was passing people, just going around the outside of ‘em. A few time I’d come off of NASCAR 2 and I would get pretty close to the wall because the track kind of levels off right there and I’d have to roll off a little just to keep from hittin’ it.”

Eric: “In the past, when we went to Daytona, there’s been a considerable amount of time leading up to the test to work on the bikes. This test was completely the opposite because we got a green light for the program a week before we left. The guys basically had a week to prepare the bikes, they spent more time preparing the truck to leave than they actually did on the bikes. Fortunately, the superbike already has some suspension, so they focussed all their efforts on trying to get the MoTeC electronics system on there.”

“Daytona is not a place to go with a new motorcycle. But, the bike is totally rideable straight out of the crate. Even with me pussy footing around on half throttle, we went 186mph on the thing and went faster than the Yosh and the factory Yamaha. It was crazy.”

JD: “On the 600, it showed up to the track with headlights and taillights and everything on it. It was an old press fleet bike. I had the third fastest trap speed, it was my first time riding one.”

Eric: “I began at just about doggy paddle.”

“I was down in Rio for exactly a year and a half, working on developing a piece of real estate. The environment down there is just filled with corruption. It is incredible to me to see that level of corruption, disappointingly so. I just stayed focussed  and trained for an Ironman, but it was difficult because I didn’t have a bicycle, but I could work on my biggest weakness, which is swimming.”

“Maybe I just lack the natural talent or maybe it has something to do with growing up in Northern California and never going in the water because we had a very, very cold ocean and very cold bodies of water, so there was just no reason to go in. And so I’m not fluid.”

“Mechanically, I’ve just started to get it, but only rarely can I get the feeling of being hydrodynamic. I’m just working on freestyle for Ironman purposes and maybe that’s my downfall, maybe I need to learn other strokes to understand how my body works in the water.”

“At the beginning of the race the course jogged to the right. I wound up on the left trying to stay in clear water so I wouldn’t have any panic attacks or stuff like that. As it turned out, I was way farther in front of the pack than I should have been, but the leaders got confused and went to the left, right over the top of me. For maybe three or four minutes, I was getting swam over the top of. The force and the speed of the strong swimmers, really, it was unbelievable.”

“It’s so vivid in my recall, but I’m more comfortable now than ever before. I want to do Ironman in Hawaii, which is in the ocean.”

Eric: “Grand total, we got 15 minutes of track time and half of it was on a dirty track. JD got half of that and half the time he wasn’t riding on the race track.”

JD: “Well, there’s a new lady that’s like a head director at Daytona and DSB went out to go on track and she told the corner workers to set up the track in a certain way. She was arguing with AMA, saying the track is right, but they had to fix it twice. It was a totally different configuration, they ended up running every possible scenario, including one that’s not even used anymore. There weren’t even marks in the turns.”

Why America’s not ready for socialized healthcare

Eric: “The fundamental problem seems to be that people have to pay in to receive. It seems like people don’t have that fire. It’s completely obvious when you come to a motivated city like New York and see all these people making an effort and they’re paying in, it’s a shame then when you see the people who have no intention of contributing.”

Eric: “It felt like I had a groin pull. The skin took forever to heal because of the lymphatic system. The return is up your thigh, so that had been totally cut off because of swelling.”

“My heart rate wouldn’t come down, on the bicycle it would just sit 20 beats higher. I was really starting to get nervous, weeks later it was still red. It’s only the last 30 days that my heart finally cam back to where I feel fit.”

Eric: “I rode it briefly in Las Vegas a month back and I was not ready to ride a motorcycle, I still had issues with my leg.”

“The new bike surpasses all my expectations. I’m just shocked actually. It really sort of feels like a 600 and delivers like a 600. The problem with the 1,000s of the past was you had to throttle things down just to stay on it. Now, they’re getting to the point where they steer pretty decent and that’s the best 1,000 I’ve ever ridden. It’s got a lot more feel than the last one I raced and so my comfort level, straight away, with trail braking and corner entry was very improved.”

“The great part is, I can continue to tighten at the apex and the real surprise is how controllable the power delivery is, because that’s where 1,000s had problems. In the past, 99 percent of riders would be faster on the 600s than on a 1,000. They’re just so much more forgiving to ride and you can get your confidence level so much higher. No, with this bike being so advanced, it’s kinda like your average 600, except it’ll pull your arms off if you choose. It’s really kind of a revelation, the bikes are becoming much more fun.”

“I think we’re at a special point because the 1,000s are finally becoming rideable. It’s got more to do with the electronics than ever before. There’s some downsizing of the bikes that means they actually fit you. Where the bike felt like it was riding you, now it actually feels like you can ride the bike. I would say electronics though because, if you twist the throttle and the bike scares you, you’re not going to twist the throttle.”

“To actually have rideability on a powerful bike is what’s exciting about this new era.”

Eric: “I have this San Francisco friend, a total clown. He’s just taking it way too far, talking about the right tire for his dirt bike. So, my other buddy, who’s just clearly fed up, to end the conversation he reaches down, takes a handful of dirt, puts it in his mouth, starts chewing on it and says, ‘It’s a Dunlop 757 today.’ End of conversation.”

Eric: “It was heavily criticized for a good reason. They’ve basically turned it upside down and put in some really capable people.”

“The new DMG has made the riders really happy, they totally cater to us. They’re very capable and they’ve implemented some new rules. Like, instead of JD and I having to jump start last year, we were both able to stay in the race, he won. There was a new rule that, as long as you fall back, you can stay in the race. ‘We’re not going to pull talent off the track if you guys use your head.’ They’ve done a lot of things that really make sense.”

“Now, how do you take that to the next level, which is out of everyone’s hands, which is attracting a good growth to the sport again, which is fans and sponsor attention and a television package? You almost need a game changer or a Bernie Ecclestone type to come in.”