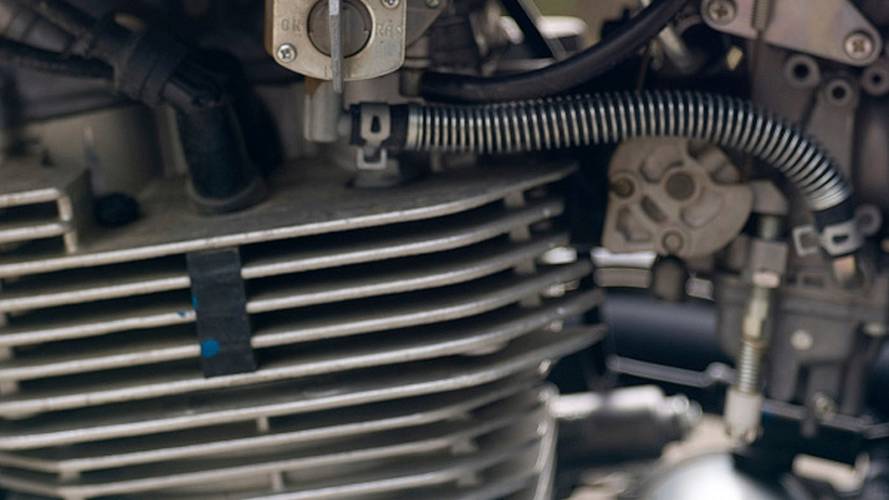 Suzuki's forgotten dual-sportIf the zombie apocalypse were upon us, the Suzuki DR650 is the kind of thing I'd steal to ride off into the hills. Its...

If the zombie apocalypse were upon us, the Suzuki DR650 is the kind of thing I'd steal to ride off into the hills. Its old-school steel frame construction and air-cooled single mean it'll run forever, even if you beat it into the ground. And, at $6,000 for a brand-new one, the DR650 is pretty attractive even if you're not fleeing a blood-thirsty hoard.

There's three bikes in this category: Honda XR650L, Kawasaki KLR 650 and this Suzuki. KTM makes some really nice bikes with about the same displacement and off-road ability, but that's where the similarities end. The Kawasaki has a radiator and fairing, and weighs nearly 70 pounds more than the DR, makes less power (37bhp vs 43) and costs $300 more. The Honda makes about the power, weighs a little less and stands a lot taller. It's got better suspension and costs $700 more. If you're over 6'3", the XR is the obvious choice; its 37" seat height is really, really tall. The DR, aside from being the cheapest of the bunch, lands right in the Goldilocks zone of not-too-aggressive and not-too-tame. The seat is tallish, but not dirt bike tall. It makes enough power, but the under-stressed motor will last forever. The suspension isn't top-shelf, but it gets the job done.

My experience with the DR650 took place a few months ago with Grant on the way down to KTM to pick up a 350 EXC-F. Per normal HFL procedure, we rode two-up on the way down. I knew when I fell off the back just trying to get up the ramp leading out of my garage that it was going to be a rough trip. A half hour later, my ass was numb and we still had 60 miles to go.

So maybe it's not the best bike for two-up riding (still better than an R1 though). I made the best of a shitty situation and got a good workout. Using the steel grab rails, I'd alternate between lifting my ass off the seat/fender and sitting down, hugging Grant. When we stopped for gas, it was decided that by combining packs, Grant could possibly recover some arm strength (constant 30mph headwinds are brutal) and I could gain some cuddle room. It didn't make things any better, but our enthusiasm for a new solution helped dull the pain.

Every time a gust blew us sideways or knocked 10mph off our top speed, I was reminded that the DR motor is, in fact, an air-cooled 650 single. Think about that for a second. We were being propelled by what is essentially 1970s technology with a teensy bit of help from modern metallurgy. And it was getting the job done. Not fast mind you, but if shit hit the fan, and Grant and I needed to bug out, we could do it on this bike.

No words were exchanged after we got off the bike at KTM. It was brutal and punishing for both of us and now what we needed was a a break. That and we had a shiny new 350 to play with.

I consulted the GPS over lunch and found what I thought was a legit dirt road. Get on the freeway, get off the freeway. Fuck. Housing development. Hmm... After a few minutes riding around in a sea of townhouses, we spotted dirt. Scary signs warning would-be trespassers and Korean bible retreats didn't scare us off. Indian Truck Trail winds up through the Santa Ana range for what feels like an impossibly long distance. I was convinced that urban sprawl had made its way this far but, after 30 minutes, all we could see in any direction were mountains and green wilderness. If you ever find yourself on knobbies near Lake Elsinore, this is the place to go.

On the way up, I rode the KTM and Grant handled the DR. I'm convinced that there is no better vehicle for traversing dirt than the 350 EXC-F, but Grant did an admirable job keeping up on the DR. It didn't help that it was shod with more road oriented tires and 120 extra pounds, but it also costs less than half what the KTM does and happily putts down the freeway where the Austrian bike is just freaking scary on super slab.

Grant's leading, to stay out of the dust, when he loses the back end leaving a sandy switchback. Fuck. He's going down with his Leica M8 and a bunch of lenses on his back. But then somehow, the crash never happens. Obviously using black magic, he pulls off a complete 360 as I pass him safely around the outside. The DR650 is more capable than I thought.

We stop to shoot hooligan shots and stills of the KTM and switch bikes. The two are by no means competitors, but it's not often you get to ride an old-school dual-sport back to back with the absolute latest-and-greatest enduro so I'll share what I learned:

- The KTM is definitely a lot faster; it weighs 240 pounds and make 46bhp. That's 126 pounds less and 3bhp more. On fire roads, hardcore "D.O.T." knobbies are just as good as the real thing.

- The handling is really different. The less rear traction the KTM has, the better it feels. When you lose the front, you just yank the bars around and hold it up with your boot. You can do power-slide wheelies, effortlessly. You can go into a corner way too fast, and easily modulate the front brake, with both wheels loose, laughing the entire time. It almost makes you feel invincible, which is definitely dangerous. And it helps that I'm 148 pounds, 23 years old, and enjoy riding aggressively. Oh, and it costs $9,499, and has the maintenance plan to match its awesomeness.

- The DR feels a lot slower but is actually only slightly slower. The way its slow-reving motor puts down power helps it hook up and pull like a tractor, which is good because 366lbs and road biased tires don't really inspire reckless shenanigans. You also sit a lot lower and further back. Instead of getting on top of the tank, you can sit down and put a boot on the ground speedway style when it slides. You don't really have to work to make it do this, just sit on top and operate the controls. Proper dirt tires would go a long way to inspire confidence and, since the bike costs $6,000, you'll probably be able to afford them. There's not a whole lot of awesome stuff on the DR. The wheels, pipe, frame and tank are all made of steel, and man do you feel it.

Grant and I swapped bikes for the ride back down the mountain, but when we stopped for gas before getting on the 15 to head home, he made me swap back. He looked perfectly comfortable and even relaxed from my vantage point aboard the skittish, buzzing 350. And, after a half hour, my ass was numb again.