Michael Czysz on MotoGP: it's lost 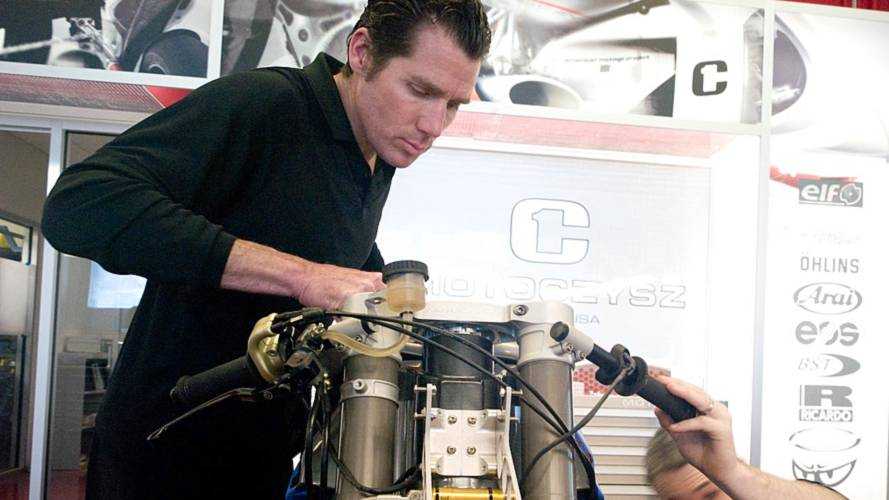 500 > 990 > 800 > 1000 > CRT > ? In an era where it is more important then ever for companies to innovate and differentiate themselves from the competition, the race track, for a motorcycle company, should be as central to their operation as the boardroom. If companies no longer deem racing essential, it is because the formula is no longer relevant. Worse, if racing classifications are not clear...

In an era where it is more important then ever for companies to innovate and differentiate themselves from the competition, the race track, for a motorcycle company, should be as central to their operation as the boardroom. If companies no longer deem racing essential, it is because the formula is no longer relevant. Worse, if racing classifications are not clear then fans fail to connect and eventually even care. Ask even a loyal fan to explain the difference between DSB and SuperSport or WSB and a CRT.

Racing directs development and to make it relevant in the 21 century, efficiency should trump top speed. Every company (and individual) should be focused on doing more with less and fans should easily understand the structure and goals of each class. What is needed is new architecture, a solid, stable foundation that can scale from Moto3 thru MotoGP and WSB while maintaining each classes unique individuality.

Go to the heart.

Motorcycles go faster because every aspect improves but at the center of this improvement is the cylinder, the heart of the machine. Cylinders have evolved to a diametric science of laminar flow and turbulence. The heart has moved far beyond simple porting and polishing of cast heads. The design and development of the cylinder (airbox to exhaust) is a serious, expensive endeavor and with every seemingly random displacement or bore/stroke change the entire expensive cycle starts over. More than anything else, global rule changes preclude smaller companies from becoming competitive and even plays a part in why existing manufacturers drop out. The result? A MotoGP grid with 3 manufacturers.

The first step; lock down the lowest common denominator, the single cylinder. The obvious choice is a 250cc 4 stroke. The only limitation should be, no pneumatic valves. Ultimately the investors in race technology want to commercialize their technology and pneumatic valves are not easily commercialized. Limiting RPM or bore/stroke ratios are misguided, the goal should be to leave the rules as open as possible.

We have been nearly here; the greatest era of GP racing from a cost development and fan appreciation perspective had to be the 125, 250 and 500cc era and the distinction between superbikes and GP were at their greatest; 2 stroke vs. 4 stroke. Even though 4 stroke engines have migrated into MotoGP there is still a solution- it utilizes what I call the 250 multiplier:

This allow the clearest path forward for even the smallest company from China or the largest company from India to enter and create a long term plan to race. Nearly all the investment made in Moto1 would be directly applicable to Moto2 and so on.

Of course fewer or more cylinders should be allowed with displacement considerations.

Under the 250X format MotoGP will continue to race technology leading prototype chassis and engines. With a common cylinder across the classes, MotoGP will not only have built in feeder classes for riders but for manufacturers too. Superbikes will continue to be the most directly connected series to consumers as the motorcycles raced are available in showrooms. However Superbike needs to be more disciplined, a minimum number of motorcycles must be manufactured and delivered before allowed to participate. The trust is lost when a series homologates bikes or equipment arbitrarily that do not even meet the basic definition of “production based” (i.e. AMA/DMG)

I generally feel fewer rules are better than more and that fewer restrictions will create more interesting racing and over the long run will cost less. Change costs money, the greater the change the greater the cost.

Electronics are a reality and will continue to play even a bigger roll in racing. Electronics can bring outside industry support and money to racing so it needs be managed, not limited.

Moto2 = homoligated electronics (open system from any supplier, available to all teams)

WSB 600cc = homoligated electronics (open system from any supplier, available to all teams)

Historically, whenever a restriction is implemented to save money it often cost more. Currently WSB does not allow a back-up bike in an effort to save money. In response every team now has a back-up bike that is apart, packed in crates instead of already built and ready. There is little difference in outright cost but all teams encounter much more work and cost in the event there is a problem with the ‘one’ bike. By definition Suberbike is to be production racing, which means highly available.

There are hundreds of motorcycle manufacturers and suppliers in the world that are candidates to participate in racing but do not. The greatest limitation is not money but time. Unless a company is already experienced in racing it takes time to work into the system. Money is still a requirement but many companies have more than ‘enough’ to participate at some level and enough of them could significantly contribute to the overall health and wealth of the sport.

What I believe keeps many companies on the sidelines is the lack of transparency and reason behind wholesale rule changes reinforcing a general fear that the sport is too big and they (we) are too small. However if it was clear that a company would have years to move up and grow into the sport this fear would be reduced in not completely eliminated. If a company could be certain that every hour and every dollar it invested in racing would remain relevant and applicable as they executed a measured, vertical growth plan then the ROI and value proposition of racing dramatically changes.

If motorcycle racing become the best organized, most transparent race series with the clearest, communicated long term vision I believe it could be the most successful motorsport in the world. There is nothing as beautiful and courageous.

This article originally appeared on the MotoCzysz website and is reprinted here with permission. You can read more about Michael Czysz and MotoCzysz using these links.