I got free riding gear from Alpinestars and HFL 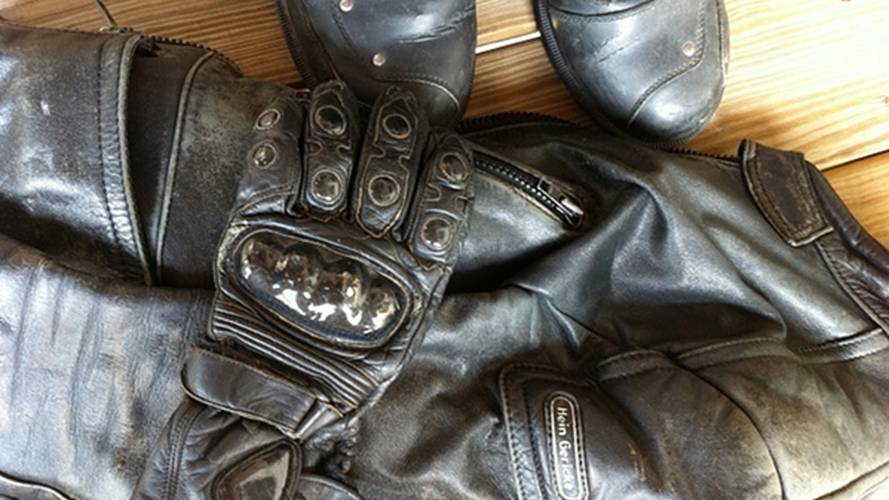 When HFL randomly choose me as the winner of the Alpinestars giveaway Lagniappe I was, and remain, genuinely thankful. Especially because my old gear was falling apart. So, I submitted my sizes (always a gamble) and Alpinestars, via HFL, hit me with an impressive smattering of black leather. A jacket, gloves and boots. It was that easy. Killer. We motorcycle-obsessed are a fickle bunch. The mac...

When HFL randomly choose me as the winner of the Alpinestars giveaway Lagniappe I was, and remain, genuinely thankful. Especially because my old gear was falling apart. So, I submitted my sizes (always a gamble) and Alpinestars, via HFL, hit me with an impressive smattering of black leather. A jacket, gloves and boots. It was that easy. Killer.

We motorcycle-obsessed are a fickle bunch. The machines we ride are a reflection of the style of bikers we are, or at least the bikers we expect to be. How much power is enough? How much is too much? Do we need a bike that goes well in the dirt, are we shredding down country lanes every day or do we want a bulletproof low-MPG beater for city commuting? We search for the right tool for the job and hopefully when we wrap our fingers around the grips of that perfect bike we have the sense to ride the piss out of it and, of course, the gear we use is just another slice of that pie. Rain gear? Boots and gloves? Milk crate strapped to the tail? Where else are you supposed to put your fruits and vegetables? We need gear that works for us and works well. A great piece of gear makes itself barely noticeable to its wearer, becoming a travel companion joining our commutes and camping trips to perform deeply meaningful work.

I ride all year as much as possible. It’s a great way to get around the city every day. But aside from the physical and mental guerrilla warfare of commuting, there’s also camping in the woods, day trips to Wisconsin or Michigan, mellow cruising up Lake Shore Drive and track days at Gingerman Raceway. I work to stay on the bike. Unfortunately, in Chicago, this means that there will be inevitable weeks where ice and laughable amounts of snow get in the way. But, in this world, I’m shooting toward a percentage of correctness as opposed to an ideal. Ideals are often not reals. In the cold I use an electric jacket liner and gloves by Gerbing (sold by the excellent folks at Motoworks Chicago, hands down the best bike shop in the city), so long as there’s no ice and not too much snow, I’m riding. Later when the weather gets sweaty I melt for safety in boots, gloves and the rest of it. Whether this is a precaution to maintain life, as opposed to a simple fear of death, remains unknown. Either way, having the right tools in your tool belt makes all the difference.

My kit was really a mess, the $100 Joe Rocket Orbit boots were very comfortable for about six months, until they fell apart internally and the cracked leather on the outside began flaking off. My beloved AGV gloves that I paid about $40 for in Buenos Aires in 2007 have seen many thousands of miles and a few crashes. The leather is stretched to hell and the palm of the right glove is worn away from a long slide sideways under a train trestle in evening rush hour traffic. The stitching has come undone on one of the Velcro closures, but the gauntlet still stays exactly where it should be over the cuff of the jacket. They feel perfect in their imperfection, actually. The jacket is an old Hein Gericke (probably from the ‘80s) found in a second hand store in NYC that fits in a more satisfying way than any other piece of motorcycle gear ever. Despite having no armor, it’s simply the perfect jacket and has indeed saved my skin on occasion. So even though I love the massively imperfect kit, it’s so great to have an intimate date with some new duds.

I’ll start with what I think is the best part of this Alpinestars kit and then work my way to the least-best, which is still pretty damn good.

What better way to test new gear than a 1600-mile road trip? My friend Steve (‘07 BMW GS) and myself (06 Triumph Sprint ST 1050) set off to the east on a brilliant five-day trip riding country roads and camping in the Appalachian Mountains from Central PA down into Virginia and West Virginia. If only Indiana and Ohio could fold under the earth’s crust to make the mountains closer. The weather was great, the campsites sparsely attended and the roads (after getting IN and OH out of the way) were outstanding and a true joy to ride morning till night.

The Alpinestars SMX Plus boots simply kick ass. They came out of the fancy rectangular box onto the feet and I could tell immediately they were the right size (11US). These are the best, most comfortable bike boots I’ve ever worn and they felt pretty good off the bike too. I wouldn’t go hiking in them or anything, but they are perfectly fine to walk around in. The vents offered a little less airflow than I would have expected by their looks, but they certainly breathe well and maintain an all-round good pairing of comfort and burliness. Confidence inspiring indeed, I would recommend these boots to anyone regardless of riding style. Instant pleasure, they will be commuters and track day friends.

Alpinestars GP Plus Gloves are seriously handsome and they’re my first pair of bike gloves that have the little finger sewn to the ring finger. I was hyper-aware of this feature for the first few hours on the bike, feeling not necessarily uncomfortable, but rather kept in a way that was all new. They fit very well thanks to Mr. W. Siler recommending that I go with the L as opposed to the M, which leads me to believe that Astars glove sizing is positively wacky. I’m not a particularly large person, in fact I’m totally average size all round and my hands are normal for a 5’ 10” average-weight kind of guy. In any case, they took less than two solid days of riding to feel broken-in (to be totally fair the boots needed no break-in whatsoever as opposed to the gloves) and they are now slathered with my sweat, tainted forever by my DNA and fit like, um, like gloves. The only criticism I will offer is this: there are two little scaphoid-saving plastic nubs on each palm and, for long periods of time riding with consistent pressure on the grips, like perhaps when getting your soul sucked out across Indiana and Ohio, the plastic nubs become like little pebbles in between the palm of your hand and the grip of your bike. So I would recommend different gloves for boring highway riding because constant engine speed will make two little sore spots on your palms. Conversely, on winding mountain roads, these gloves are your friends, hi-fiving all over your brain.

The beautiful and understated Alpinestars Mert Jacket is a mixed bag though. The leather is nice and soft and the integrated armor is the most comfortable I may have ever felt. I want so badly to love this jacket because it does so many things wonderfully, but the folks at Astars just messed-up the fit on this one. I know from experience that Astars jacket size USA 44 will fit. I know this because I’ve tried on a bunch of different styles to see how they feel. So when Sportbike Track gear said the Mert jacket ran a little large compared to the rest of the Astars line, I took note and ordered a size down and got a 42. At first its baggyness wasn’t that apparent and I assumed it was a more cruiser casual cut, but a few days into my camping trip I couldn’t hide the truth: this jacket is almost clown shoes territory. The leather feels great and the perforation is dreamy once you get moving through the wind, but the leather hangs down into my gas tank and I could fit a small dog in there. It would be perfect if I had a massive beer belly but that hasn’t happened yet. In the fall, with two shirts and a hoody, it will feel much better, but for now as a summer jacket with just a t-shirt underneath, it’s just got too much extra leather flapping around.

It’s starting to feel a bit awkward here criticizing a really cool expensive jacket that I got for free, but while I’m on a roll there are two more little things. The zipper has the ring and female end on the left side and the male end on the right. No big deal but I’ve never worn a jacket that zips up like that before and it takes a little getting used to. Lastly, there is a tiny metal tag on the outside of the jacket on the back of the neck which made just enough contact with my T1 vertebrae to make it sore after a long day of riding. Subtle but annoying.

In the spirit of trying everything we learn and become more informed. Massive thanks to HFL and Alpinestars for the unexpected and generous gift of some sweet gear for an obsessed biker.