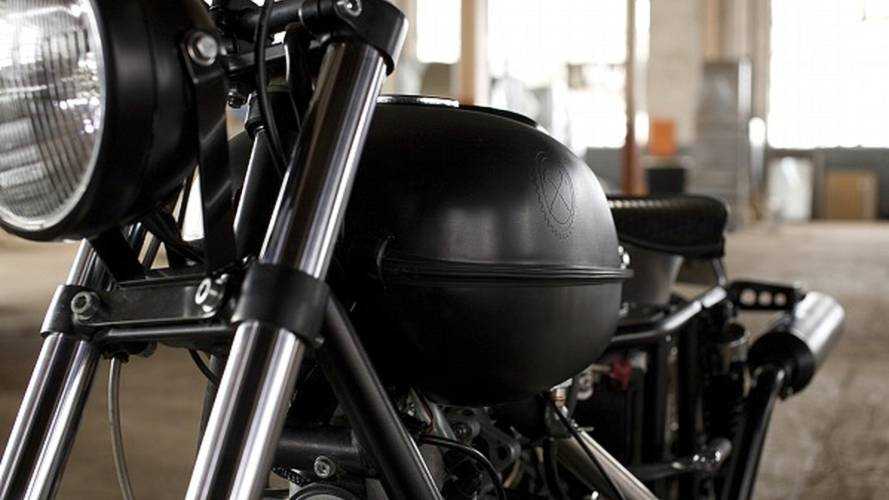 Know the party we threw at the Ace Hotel New York two weeks ago? That was to unveil the Hammarhead Solo X. Based on the Ural sT, James Hammarhead set out to boost its off-road ability in order to make it even more of a go anywhere, do anything machine. That didn’t just mean fitting knobbies and tougher suspension, Hammarhead relocated the air intakes into a cutout in the tank so the bike can for...

Know the party we threw at the Ace Hotel New York two weeks ago? That was to unveil the Hammarhead Solo X. Based on the Ural sT, James Hammarhead set out to boost its off-road ability in order to make it even more of a go anywhere, do anything machine. That didn’t just mean fitting knobbies and tougher suspension, Hammarhead relocated the air intakes into a cutout in the tank so the bike can ford streams.

“The sT was attractive because it is an elemental motorcycle, but this also made the build a bit of a challenge,” says James. “There was not any plastic to strip off, Urals are apparently made of metal.”

The Neuropsychologist by day, custom bike builder by night apparently agreed with the assessment of the Ural sT we made after riding it back in 2009 — it’s a great all-rounder, but it’s the surprising off-road ability that really makes it unique.

“I got to know the Ural sT providing support for our Pier 18 video,” says James. “I spent three days running from the dirt and gravel at the location to destinations all over Philly -- grabbing stuff for the crew. The Ural is perfect for ratting around in the dirt then shooting through traffic to grab that much needed Hoagie. The bike is low and long, but not big.  It felt much smaller than the R100 I rode in the early ‘90s. The bike's suspension was well dialed in and the build quality was excellent. It seemed crazy but I felt the bike needed to be prepped for off road.”

“Even though the sT is very basic, I stripped the bike further,” continues James. “The instrument cluster was removed and new headlight selected that could swallow all the electrics. The correct handlebars were found hanging in the shop and these were fitted out with basic switchgear and internally wired. The bars are capped with Oberon bar end LED turn signals. The ignition switch relocated under the seat and the speedo mounted to the transmission. The deeply valance steel fenders were replaced with alloy units that were re-arched to fit the 18 inch wheels. A simple LED taillight is all there is out back as the bar end signals are visible from the rear.”

“Much of what was needed to protect the bike off-road was available from Raceway Services. They provided crash bars, skid plate and the awesome high pipes . Jim Petitti at Raceway also advised me to install Power Arc Ignition System, which is the only engine modification we made.  The head temps are considerably lower with this system and there is less delta in temp between cylinders.”

“The high pipe introduced a new problem on the bike, the high exit made the airbox intakes seem poorly placed – particularly for a spirited stream crossing.  While thinking about the exhaust I had looked at some fantastic images of 1940s R75 and early Ural M72s. Once the high pipes were a go, I went back to the R75 for inspiration regarding the intakes.  To replicate the tank mounted air box of the BMW R75 rig, I cut the bottom out of the Ural in tank tool box.  A pass through air box was formed in the tank that could accommodate two conical K&N filters. We had fabricated and tested 1 3/4 intake tubes before the air box tank was made, now these were fitted inside the tank.  The exhaust and intakes required a slight re-jet of the stock carbs but otherwises no changes were needed. When the winter weather breaks, my first outing with the bike will be a deep stream crossing at a farm just outside Philly.  Looking forward to getting drenched.”

One problem we encountered with the sT was a high-speed wobble that’s apparently characteristic on older BMW airheads too. “Clearly the frame is being pushed beyond its capabilities,” explains James. “The go to move on the R90s and R100s was to brace the swing arm.  But, another option on these bikes was to set the front end up perfectly, add a fork brace and put on state-of-the-art rear shocks that were also set up correctly. Then the problem would go away. Ural has developed the bike since you rode it  and the rear shocks have been improved. I took the bike to our AXIS shock guru and we tried some of their bodies but nothing worked well. Finally we just set the front end up as perfectly as possible and put heavier springs on the Sachs shocks.  This really helped the high speed handling and I think further modification of the frame is not needed.”

“But overall, the sT is a fantastically spec'd bike,” he continues. “Adding better brakes or pumper carbs would be a waste of money — I had Del'orttos on it but the heads do not like more fuel, it runs better with less fuel and cleaner timing. So we did the one performance mod really needed — the ignition. The Ural/BMW R75 is an odd design that has been maintained in a weird homeostasis, constantly in production but never really evolving. To be honest, this was a challenge given my desire for a modern bike.  But in the end, the bike won me over. 1) the running gear is first rate, 2) the feel and sounds are right, 3) it is fucking simple and robust, 4) kick starter 5) very nice off road. Weakness — what a nightmare of a wiring harness.”

“Great as the bike is, what did we do to make it better? Well fuck, it can cross a stream and still has a 30-inch seat height. And it lost some weight.”

“What the Solo X really delivered is the same vibe as the Jack Pine but in a long and low form -- and a stronger vintage connection.  Very spare and lean from the riders seat. Feels much lighter than it is and has nothing in the way of just riding the fuck out of it. Again it is a striking change,  just the basic elements without the idiot lights, bulbous turn signals, huge fenders and ugly side panels.”

“Is the Solo X more of a styling exercise than the Jack Pine and Woodsman?  Maybe. Does it make sense to buy a $12,500USD Ural sT?  Maybe to some. I expect the usual ‘I could do that in my garage for half the price’ crap and I truly hope people do. I want this bike help sell stock sTs. We might put out the fenders and speedo conversion as accessories. The bike is a great bridge for us as we prepare the CRF based bike and I really want to do a sidecar in the future. I think it is the last matte black Hammarhead bike for a while.”

We asked James what the deal with the solo seat is. “We were calling the bike ‘The Traktor’ even before the seat came on the scene.  There was the crazy tank/seat interaction. I had a short bench seat made up with the plan of de-seaming the tank. I figured making the air-box would be the hard part and we could just grind off the seam in three-inch sections and stitch weld it up, like we did in the past on Minis to make them more aerodynamic. This turned out to be impossible because the top and bottom halves of the tank are not even close to the same shape, hence the big ass seam. The air box was easy, most of it was the down tube saddle so we lost only one-gallon (total capacity is now four gallons). We removed the knee pads and minimized the rubber trim. The bench seat just did not work with the seam. As soon as I set the Traktor seat on the bike I was sold. Kinda fun to ride with it as well — springs like a scooter seat.  Plus the bike pulls like a fucking Traktor."

We're sharing the exclusive on the Solo X with BikeEXIF.

There's 19 photos no one else has in this gallery.