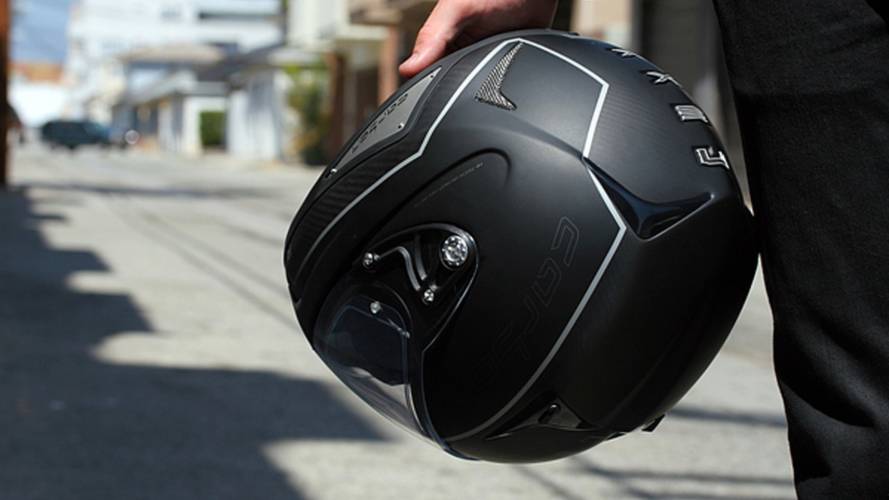 Nexx XR1R Carbon: the nicest helmet everWho makes the lightest, most comfortable, easiest to see out of high-end carbon fiber helmet on the market?...

Who makes the lightest, most comfortable, easiest to see out of high-end carbon fiber helmet on the market? It's not Shoei, Arai or AGV. It's a small Portuguese company you've likely never heard of that's out there quietly producing the best helmet money can buy. The Nexx XR1R Carbon weighs in at 1200g for a medium, a full 200g lighter than Wes's AGV AX-8 Dual (which is itself lighter than the AGV GP-Tech), has an infinitely customizable liner that's more plush and comfortable than anything from Arai, is fitted with a shield that reaches up high enough that you'll actually be able to see while you're tucked and retails for only $599.00.

Maybe $599.00 isn't dirt cheap, but that money gets you the best of the best. But, when you compare it to $769.95 for an Arai Corsair V (sans graphics) or $681.99 for a Shoei X-Twelve (also sans graphics), it seems like a pretty good deal. The AGV GP-Tech undercuts that price by $100, but like the Shoei and Arai, lacks the extreme light weight.

Light is right when it comes to helmets. Why? Your head is at the extreme end of your body, meaning any body and bike movements are exaggerated by the time they get there. A bump that moves your butt an inch upward will likely move your head up an inch also, but probably an inch forward and then an inch to the rear as well. Your neck and back muscle have to support that weight and control your heads movement. More weight makes that harder, fatiguing them, so less weight is better. You’ll feel this right away in how easy and natural it becomes to do normal things like turn your head or look upwards, but the big benefit comes over time. Ride all day in a helmet this light (and this aerodynamically stable and this quiet, all these things add up) and you’ll be that much less tired and sore at the end of the day.

Nexx achieves this radically light weight without sacrificing shell strength. Grab two sides of the base on some polycarbonate helmets and you can noticeably deform their shape with your hands. Not the XR1R, despite its drastic diet.

It achieves this by simplifying as many components as possible — grams are shaved through the lack of a quick-change visor mechanism, for instance — but also my taking advantage of the most modern construction methods. All carbon fiber isn’t created equally. Nexx’s lives up to that materials full advantages.

Aerodynamics are likely quite a bit different than anything you've worn before. Pop up out of a tuck at high speed while wearing the Nexx and your head stays stable. It's the same story when you turn your head side-to-side. Nexx has developed a shape that works well no matter what direction wind is coming from. Things keep getting better too. Most chin vents border on completely useless, but flip open the massive one on this helmet and you'll feel the interior pressurize with cool air. It feels high-tech and it works. How does one chin vent work so incredibly well while so many others fail?

The combination of thick chin curtain and tight neck roll with a larger than usual chin vent means that instead of fresh air coming mostly from underneath (and bringing with it road debris to get in your eyes) it comes in nice and controlled and filtered from the vent.

The Pinlock anti-fogging insert is the largest one ever made and the shield it fits on is appropriately huge. Wes extolled the virtues of large shields when he reviewed the AX8 and the XR1R gives a similar feeling of openness. Look side-to-side and nothing is there to impede your vision. Look down and you see the chin bar and breath deflector (why are you looking down?), but look up as high as you can (like you do in a racing tuck) and you'll just barely see the upper edge of the eyeport. This kind of vision improvement is a big deal, making the helmet much nicer to wear when you're riding fast and contributing less to fatigue because you don't have to crane your neck so much to see around corners when you're hanging off.

Being able to clearly see the road is a good thing. It's pretty much necessary if you're going to operate a motorcycle. Unfortunately, doing that while tucked in or hanging off with your head down low is impossible in most helmets. The Arai RX-7 has a much higher viewport than most race-replica helmets, but the XR1R surpasses that by quite a bit. If that was its only redeeming feature, I'd still consider it to be an exceptional helmet.

The XR1R also helps you to be seen, but it does it in a sneaky way.

See those two bright white spots? Those are reflective pieces of material built into the liner. There are three more on the neck roll. Reflective safety gear is usually bright and ugly at best, but this is executed so well that most people will never even notice it's there. At least not until their headlights hit it.

The plush liner is a work of art. Contrast stitching and leather trim is nice, but even nicer is the way it feels when it's on your head. If you have an intermediate oval shaped head, the fit should be perfect right out of the box. If not, yank the liner out and start adding the provided pads to tailor fit. Good luck trying to find another helmet that comes with extra pads to customize fit.

The most immediately obvious difference between the XR1R and other full-face helmets is the exposed shield mechanism. You'll need a nickel, quarter or screwdriver to swap shields and it's going to take a minute. Remove two screws on either side, pull the old shield out and drop the new one into place. It's not complicated or challenging, but it does take a minute. There are benefits to this system though. Three aluminum screws and a plastic plate are not very heavy and with an emphasis on light weight, they make sense. A simple system such as this is also incredibly durable and hard to break. We're looking at you here Arai.

The majority of noise comes from the lower rear vents behind and below your ears. Looking at the helmet, one might expect the shield mechanism to make some noise or even whistle, but Nexx did their homework and it's not an issue. They've also added a double layer of padding and liner material around the ears to help kill noise. If you've got room, you can install a third ear pad (provided) to further quiet things down. Overall, wind noise is on the quieter side of average.

Combine superior visibility with incredible light weight, the an incredibly well designed liner, hidden reflective material, ECE 22.05 safety rating (lighter, softer and safer than Snell), fully functional chin vent (the other vents work too!) with a $599 price tag and you have a winner. The other great thing about this helmet is the non-carbon version that starts at $419 for solid colors and weighs only 100g more. Once we put a black visor on the Nexx XR1R Carbon, this will literally be the perfect helmet. Well, sans the garish over-branding that is.