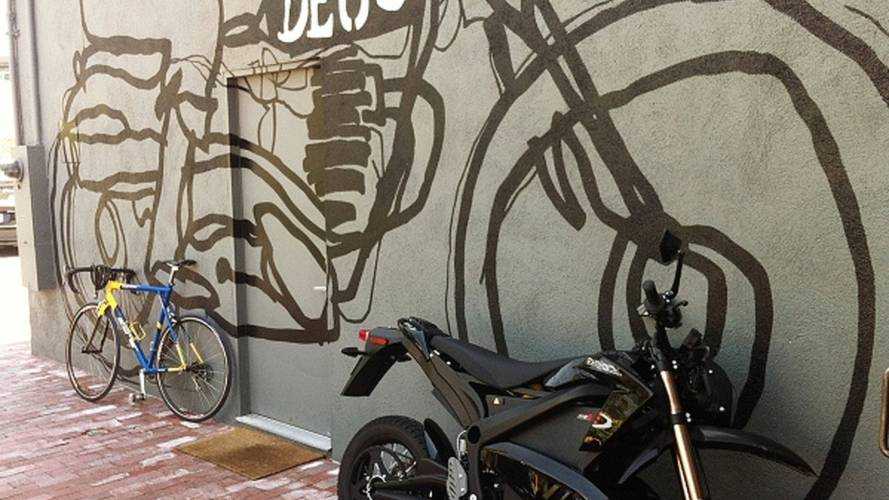 We’ve been writing about electric bikes since HFL’s launch, four years ago, in the process covering their rise from flights of fancy to futuristic concepts to expensive novelties to gas-beating race bikes and, lately, the creation of realistic consumer products. But while we’ve spent plenty of time on machines like the Brammo Enertia, MotoCzysz E1pc and even the full Zero range, we’ve neve...

We’ve been writing about electric bikes since HFL’s launch, four years ago, in the process covering their rise from flights of fancy to futuristic concepts to expensive novelties to gas-beating race bikes and, lately, the creation of realistic consumer products. But while we’ve spent plenty of time on machines like the Brammo Enertia, MotoCzysz E1pc and even the full Zero range, we’ve never had enough time on any of the above to see if they could honestly fit into our lives on two wheels. So, over the next two weeks, I’ll be totally ditching internal combustion in favor of this 2012 Zero DS. Officially rated at an 80mph top speed and 112-mile range, it’s surely the most legitimate electric yet realized.

Living in LA and using motorcycles as my primary means of transportation, I think the DS is going to be an easier fit for me than for most riders. The majority of my journeys are short and take place at relatively low speeds while splitting traffic, punctuated by brief, high speed dashes on the highway. Living in a standalone home, it’s also easy for me to plug the bike in every night. Zero threw in a 2x quick charger, dropping the full charge time from 9 to 4.9 hours, but that still means it’s going to spend most nights tethered to an outlet. This is the $14,000 version of the DS with the 9kWh battery pack.

Still, I’m more used to riding motorcycles like the Aprilia RSV4 factory, which are faster in 1st gear than the Zero DS is flat out. Riding fast and riding everywhere — for work, for play, to the store, to the gym, to friends’ houses, literally everywhere — I’m going to be putting the bike to a tougher test than any reviewer yet has. And yeah, DS stands for Dual Sport, so I plan on getting it dirty too.

I’ll be summing things up at the end, of course, but in the meantime, I want to give you a real, deep-level insight into what life on an electric bike is like. Since I ride everywhere, every day, that’s going to take the form of daily journal-style recaps. These are complete, objective honesty too. You’ll see the highs as well as the lows. Let’s get started.

- Zero dropped the bike off last week, but wrapped up in show production and travel and whatnot, I didn’t get a chance to ride it until Saturday. Dropped the SuperTen off at Grant’s, picked up a CCW Misfit, took that to Ashlee’s place and swapped that for the Zero DS. The Zero is noticeably faster and more reassuring than the CCW and sharper handling and easier to manage than the 636lbs SuperTen.

- Then a night out. First Wurstkuche in Venice before heading over to a dive bar in Hollywood, then home to grab my backpack and over to the not-a-girlfriend’s house for the night. Total distance: 34.2 miles, including about 12 miles on the highway. I don’t like going slow, so the vast majority of this was spent at WOT. By the time I was parked outside the NaG’s place, the battery was a little over half depleted. I nearly hit her as she walked across the street from her BMW, she couldn’t hear me and I was fixated on a nice pair of bare legs below a short dress.

- Sustained highway speed: an indicated 85mph. Felt honest too, I was passing 95 percent of other traffic, including several bewildered Harley riders. I made sure to buzz them as close as possible.

- I was worried about rapidly draining the battery going so fast on the highway. There’s a Sport/Eco mode button. Eco drops the top speed to 74mph and noticeably blunts throttle response. I’ll be sticking to Sport from now on.

- The Zero DS borrows its seat from a CRF450X. It’s a good thing it doesn’t fit flush, because the gaps leave room to shove stuff under the seat, which doesn’t clip off like on most bikes. The frame rails and battery box form a sort of bucket under the front, which fits my Xena alarm disc lock, while my Aerostich Lightweight Portable Bag can be squeezed in between the rear of the seat and the fender.

- The DS is so quiet that, below 25mph you can actually hear the turn signals clicking.

- Caused quite a fuss getting the NaG to dig out an extension cord so I could plug the bike in at her place. An hour and a half of regular 110v charging only got me one bar on the battery meter. Wasn’t worth the hassle.

- Rode to Deus over in Venice for MotoGP, where I plugged in again for about two hours, again for a single bar gain. Quite the conversation piece over there. A Spanish gentleman took a spin around the car park, sneaking up behind me to nudge my ass with the front tire, proving how quiet the damn thing is.

- Sean, Grant and I agree that the DS’s stock tires would work great for flat track racing.

- The MT-03-alike headlight is powered by two dinky incandescent bulbs and isn’t much good at actually providing any illumination, even on high beam. I’d have expected a full LED system, with much more brightness and much lower draw, on such an expensive bike.

- Back home the next afternoon, the quick charger got me from below half, to completely full, in around two and a half hours. Not bad. I’ll be leaning on that quick charger a lot.

- Riding to a cafe this morning, through surface street rush hour traffic in Hollywood, emphasized what a weapon the DS is for lane splitting. Nice and high for vision, it’ll easily and confidently plow through gaps as narrow as your hips. I wear size 30 jeans, so those are some narrow gaps.

- Throttle response and therefore acceleration away from a dead stop is tuned so it doesn’t frighten new riders. Needs some help for us, so we’ve booked an appointment with Hollywood Electrics later this week. One of the big advantages of electric motivation? Tuning is as complicated as plugging the bike into your laptop.

- Some guy just came in the cafe and asked the barista who had the “super cool” electric motorcycle parked out front. I’m sitting right by the door with a Vanson and a helmet. Guess he couldn’t connect the biker and bike. I didn’t bother chiming in.