The CHP on The Snake 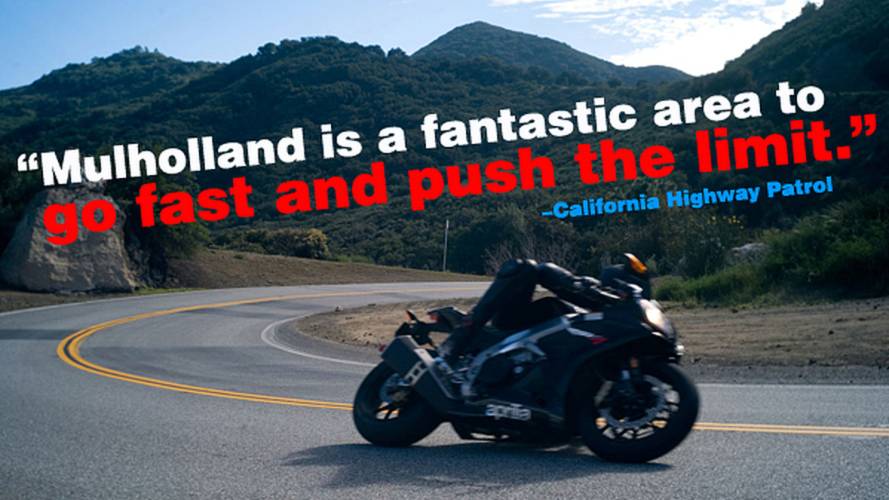 You’ve seen the pictures, watched the videos and heard the stories. There’s a road north of LA where motorcyclists go balls out and where the police just sit and watch it happen. So long as you’re doing it between two informally agreed points, you’re very unlikely to get a ticket. Why is that? We went to the California Highway Patrol and asked. What we got wasn’t so much an answer as a s...

You’ve seen the pictures, watched the videos and heard the stories. There’s a road north of LA where motorcyclists go balls out and where the police just sit and watch it happen. So long as you’re doing it between two informally agreed points, you’re very unlikely to get a ticket. Why is that? We went to the California Highway Patrol and asked. What we got wasn’t so much an answer as a steamrolling, but an illuminating one nonetheless. You’ll be surprised who they’re targeting for enforcement. Hint: it’s completely the opposite of riders like Adey.

Speaking of Adey, we actually approached Officer Zimmer initially. He can usually be found perched atop The Snake, more often than not in the process of impounding Adey’s R1. But, these are cops we’re talking about and talking to and he wouldn’t talk to us. Instead we got Leland Tang, Public Information Officer for the West Valley CHP area. He’s got first hand knowledge of enforcement on and around Mulholland and, more importantly, is tasked with working with motorcyclists to educate them about the hazards to be found there.

What’s the official CHP policy about motorcycle enforcement on The Snake?

“The area in question is on Mulholland from Seminole to the lookout and it’s a very popular area for several different groups. Obviously, you have your Harley riders, what we call our ‘leisure riders.’ They love the ride because it’s a beautiful scenic area. And then we also have our sportbikers or, as some would call them, ‘cafe racers.’ That particular segment likes to go fast and likes to push the limits and Mulholland’s just a fantastic area to do that, the roadway is beautiful. We also have a series of bicyclists that also like to use that same exact area.”

"Now, mind you, the road is not that wide. It’s very twisty and curvy and you don’t have many shoulders there. And we have these three groups vying for the same piece of real estate. So, one of the challenges we have is to get those groups to share the road, to share that area respectfully of each other and also to be safe."

Why do riders crash there?

"That’s really why we’re out there. It’s not to be the bad guy and say, ‘let’s ruin everyone’s great time.’ We want people to enjoy the Santa Monica Mountains, we just want to to do that in a safe, responsible manner. Safety is the most important thing that we want. If I was a motorcyclist, I would be gravitating toward that area too, just because it’s so beautiful. We want riders to know their limitations, to ride within their skill level and to be responsible and be mindful of the other individuals using that same roadway."

Are CHP officers trained to identify the difference between experienced an inexperienced riders?

"We don’t have training where we can say a person is an experienced or inexperienced rider. But, I can identify an inexperienced rider even on the freeway, just by the way they’re using the road. Are they driving in the middle of the lane where all the oil is? Or, are they in the left track or right track? You know what I’m talking about. That’s one usual sign that would indicate this person is not a rider all the time. One of the things we tell people is, ‘Just ride within your own skill level. If you’re a beginner, then just stay in the confines of that until you learn better or go to our motorcycle safety program.’"

How do you decide who to ticket?

"Another thing you’re about to start hearing, that we’re unveiling right now and that a lot of local departments are enforcing already, is this novelty helmet thing. The helmets that a layperson would call a brain bucket. The Highway Patrol, right now, we’ve not gotten a directive from Sacramento to start enforcing that, so we are still in the education phase."

"The Highway Patrol is not enforcing that right now, but, our counterparts in the police and sheriff’s departments are and they have been writing tickets. Courts are enforcing those tickets as well."

"We call it, ‘The 700 G.’ When a person’s head sustains a 700 G force, that’s fatal. Typically, injury is around 500 and a DOT helmet is below 200. At 700 G, a novelty helmet offers no protection whatsoever. So, we’ve been going out like crazy and preaching that. Our mindset is that we educate first and then we follow it up with enforcement."

"You know as well as I do that you can buy DOT stickers on the Internet. So, one of the things we’re doing is educating officers on how a DOT helmet sits on the head versus a novelty helmet. A novelty helmet fits closely to the skull, a DOT helmet has that one to two inch buffer all around."

Are you less likely to get a ticket if you’re wearing full gear?

"We want to encourage riders to get additional training, to ride within their skill sets — we want them to enjoy the roads — and then to practice good safety by wearing good equipment like helmets and jackets and stuff of that nature."

What types of tickets are you writing?

"We get exhibition of speed, which would be, if you go up to the lookout and you’ll see all the tire marks there. That, they’re doing. They try to explain it to us, the cafe racers all say, ‘Well, I’m trying to get my tires warm so I get better grip.’ Whatever. We have to explain to them that sharing the road means being a good neighbor. There are other people that live in that area."

"Right at Seminole and Muholland, you have a new development. You’ve got a motorhome park. On the other side of The Rock Store, you have a new development too. So, we have people moving into an area that was once rural. They complain about noise and the inability just to get out of their driveway. Can you imagine the frustration level if you’re going somewhere and can’t get out of your own driveway just because of the motorcycle traffic? In a rural area? Yeah, that would be frustrating for anybody."

"Speeding tickets are not the issue that we’re getting out there. If you know that area, you know you can’t really speed. The geographics, the roadway design, they limit your speed. The problem is when they lose control and go over the double yellow lines and go head-on with a car. We’ve seen that. So that would be where speed would come into play, but we’re not talking astronomical figures here. What we’re talking about is riders who are just not riding safely."