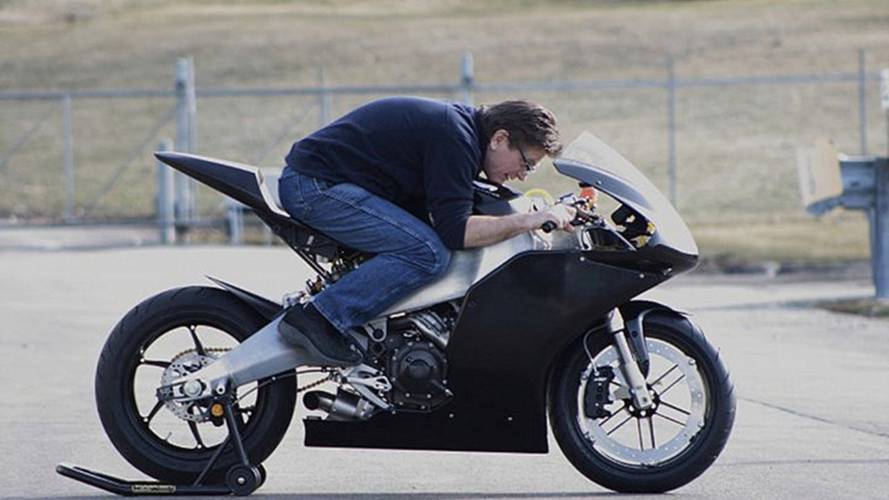 Last week we showed you merchandise from Erik Buell’s record label and sponsor of his race team that promoted the Erik Buell Racing 1190RS, a forthcoming street bike from the former Harley employee. Now, we’ve got official word from EBR, confirming the that street-legal bikes are coming. Update: AMA EBR racer Geoff May talks 1190RS in below video. For some reason, EBR isn’t responding to...

Last week we showed you merchandise from Erik Buell’s record label and sponsor of his race team that promoted the Erik Buell Racing 1190RS, a forthcoming street bike from the former Harley employee. Now, we’ve got official word from EBR, confirming the that street-legal bikes are coming.

For some reason, EBR isn’t responding to our emails or interview requests, so this news comes from a newsletter sent out to a bunch of people. No, we don’t feel very special, but we’ll chalk it up to Erik hedging around his non-compete, which is said to expire in February. Coincidentally, that’s when we’d expect to see the street bikes roll out. Don’t expect huge production numbers or mass-manufactured prices though, Erik’s race team is operating on a shoe string budget and even asking for donations from fans. That means we’re unlikely to see a glossy new factory or high production numbers, instead there’ll be niche products likely built-to-order. A hard scrabble existence has become de facto for any American company producing motorcycles that don’t go “potato, potato." Some is still better than none.

http://www.youtube.com/watch?v=hA0UoHYPOA0Here's an episode of On The Throttle in which AMA Superbike rider Geoff May gives some insight into the struggles EBR is facing and its 1190 development plans.

The 1190RS will be based on the Erik Buell Racing 1190RR race bike, itself based on the Buell Barracuda 2 that was in-development when Harley canned the brand. In race trim, that bike develops 185hp at the wheel, something we don’t expect to see on anything road-legal. More likely are the 157bhp and 82lb-ft numbers of the ‘Cuda, which, considering that bike weighed only 161kg/355lbs (dry), would till make it fully competitive with bikes like the 170bhp, 377lbs/171kg (dry) Ducati 1198.

Here’s the word from EBR:

"Erik Buell Racing wants to thank all the supporters, customers, sponsors and suppliers who have helped the new company get quickly on its feet and running hard. From a cold start-up in the winter of 2010, the company has been able to get into business supplying thousands of orders for parts to support Buell racers and track day riders around the world, build bikes that have won championships in Europe and the US, and now be in the process of preparing to get back into production of a new American sport bike.

“We are going through a huge shakeup in our country. But the American spirit of can do and can help is at its best in times like these." said Geoff May, who has piloted the #99 Erik Buell Racing 1125RR Buell to multiple top ten finishes, as high as sixth, in the later part of the season in AMA Pro Racing Superbike. "It motivates me even more to get the best out of the bike and myself knowing that we have so many fans out there who believe in us."

Geoff and Erik Buell talk about the supporters who have gone to the www.ebracingteam.com site to donate towards the #99 race team. "There was no question that we had to start work on a new street motorcycle design for 2011, but we also knew we had to go racing at the highest level in 2010." Erik said. "The solution came from suggestions on our social media sites, where race fans told us they would support us directly if we would just set up a site. We could not have made the last four rounds of the series without these contributions, as we simply needed to invest our money into the new motorcycle."

Erik Buell Racing's #99 team is also sponsored by Rat Pak Records America, who will be celebrating the season and the future by releasing a video on their site featuring music from Michael Wilton's new CD behind a fun teaser video on EBR. "The whole race team and fan base for EBR are really fun, full of rock energy, and so we wanted to give them some entertainment." said Joe O'Brien of Rat Pak Records.