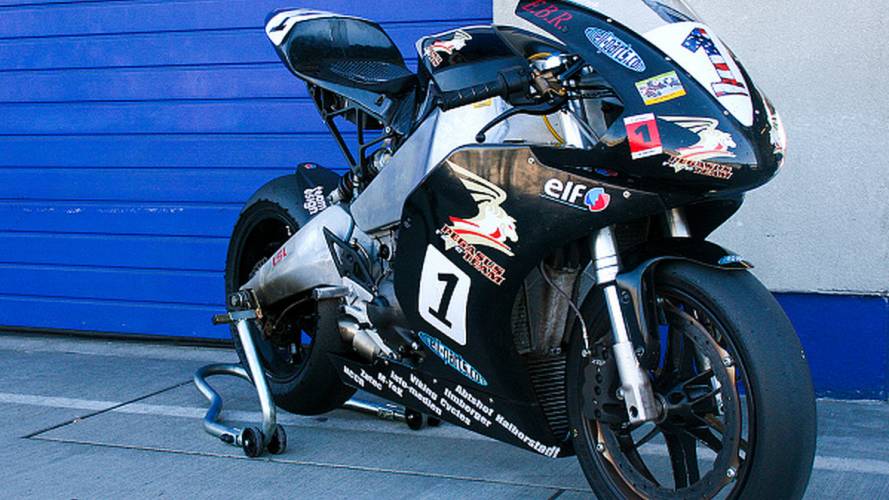 These are the first images of the EBR 1190RS, snapped in East Troy this morning just after the bike was finished and just before it was loaded on a truck bound for the Indy Dealer Expo. We’ll be updating this story continuously, Erik’s sending us specs and better photos as we speak. Update: more and larger photos for a total of 16. Update 2: with a race exhaust, the RS will weigh in at less ...

These are the first images of the EBR 1190RS, snapped in East Troy this morning just after the bike was finished and just before it was loaded on a truck bound for the Indy Dealer Expo. We’ll be updating this story continuously, Erik’s sending us specs and better photos as we speak.

Update: more and larger photos for a total of 16.

Update 2: with a race exhaust, the RS will weigh in at less than the AMA Pro Superbike minimum weight limit — 380lbs.

This new 1190RS is based on the EBR 1190RR race bike you can see here. The RR develops 185bhp at its rear wheel, a figure that’s likely to drop 10 to 15 percent or so due to the EPA-certified exhaust and gentler tuning. The 1190cc engine is a larger version of the Rotax mill used in the Buell 1125R, this new EBR also shares its fuel-in-frame chassis with the old Buell.

When we interviewed Erik back in October he explained that the 1190RS would be very small volume and come with a very high price tag. He floated the $39,995 Ducati 1198 R as being in the price ballpark and suggested the RS will come with a similarly high specification.

“It’s going to be low volume production,” Erik told us. “I mean tiny. I just don’t have the money to buy anything. But we can get the engines from Rotax, we’re going to have to convert them into an 1190 ourselves.”

It actually takes quite a few parts because it’s a different crankshaft. It has to be re-valved, the connecting rods are different, the cylinders are different, the pistons are different, the head has to be slightly changed to match the bore. Titanium valves, actually a ton of stuff. But none of it really affects the fundamentals of the base motor. You know, is the oil pump good? Are the crank bearings good? Is the rod size good? Does the cooling system work? You know, those things. So all the stuff we’re doing is sort of hot rod style. Titanium valves, different cam drive, different pistons and rods because it can spin up to 12,000 so I need really, really good rods. The motor was originally an 11,000rpm motor, but is spinning up to 12,500, so those sorts of things. But they’re all bolt in.”

“We’re using very high-end things like Del West valves. The first street bikes will be built to that race level. That’s partly because I want to be able to take the street bike and convert it into a race bike economically. In short, a guy could buy one, put a race pipe and a race chip on it and go pretty fast. It’ll be as good as what Harald is riding and better than what Geoff is riding. That’s pretty good.”

“When you’re doing small volume anyhow and the price is kinda high, you should give a guy premium stuff. Will most owners run them that hard, at the limit? No. But it means that if they run them hard and do a lot of trackdays, it’ll just hold up forever basically.”

“It’ll be much like if you get a 1098R or a bike like that, it comes with a lot of good stuff. It’ll have Ohlins suspension, it’ll be very light with some carbon fiber, it’ll be a nice bike. They’re going to be hand built”

While he was still at Harley, it was actually Erik’s plan to release the 1190RS before the 1125R as a halo bike for the brand and an effective Superbike racer. “If we had raced the 1125RR as an 1190 superbke first and then come out with the 1125R, with the higher higher handlebars and the bigger fairing and the saddlebags — which is really what that bike was, a sports touring model, but things got mixed around by management — would it have sold better? No freaking doubt,” said Erik in October. “I will go to my grave believing that we made a mistake.”

EBR plans to produce 100 units of the 1190RS in 2011, with the first delivery scheduled some time around March.

Make sure you check out the interview we did with Erik Buell last October.