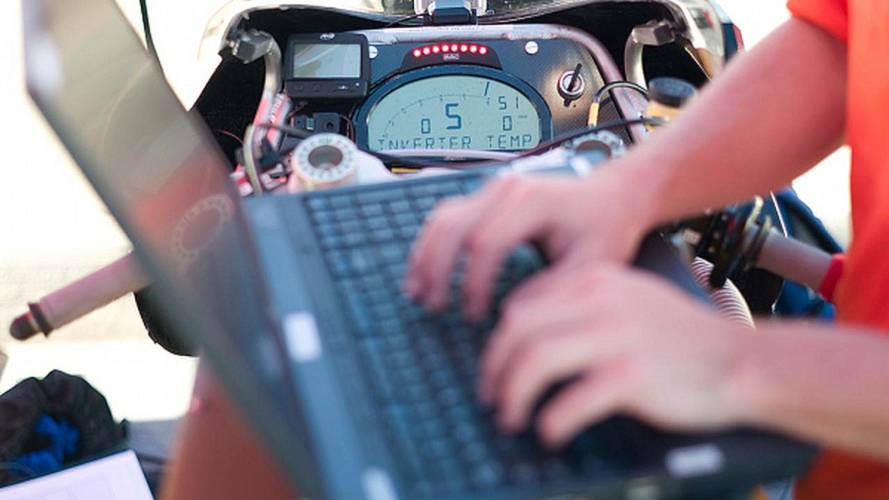 Last Saturday we dropped by Fontucky’s Auto Club Speedway to watch Chip Yates' first test with his new 240bhp/365lb-ft electric motor and his new wheelie control software. Impressive is an understatement. Beating his previous best lap time of 1:39 by two seconds, Chip wasn’t even using full throttle and was flying past literally every other bike on the track. After placing second in his first ...

Last Saturday we dropped by Fontucky’s Auto Club Speedway to watch Chip Yates' first test with his new 240bhp/365lb-ft electric motor and his new wheelie control software. Impressive is an understatement. Beating his previous best lap time of 1:39 by two seconds, Chip wasn’t even using full throttle and was flying past literally every other bike on the track. After placing second in his first race against gas bikes, Chip’s got big plans for 2011. Keeping the front wheel down is just the first of them.

"It’s really just a test session. We upgraded our motor and our power from 194bhp to 240bhp. We wanted to try it out and see what it feels like and, sure enough, it feels crazy. Lots of power. Secondarily, we wanted to try our wheelie control software so I can get the power to the ground."

"I can count on one hand the number of people who have ever ridden a motorcycle with that kind of power. It’s me and Rossi basically. The bike makes like 365lb/ft of torque, but I’m using less than half of that."

The trouble with wheelies.

"When I was out there racing with the heavyweight twin superbikes, I could pretty much catch them on the front straight and the back straight no matter what. But, I’d watch them disappear from me a little bit getting onto the straightaways. It was frustrating, I’d open my throttle and I’d wheelie, then I’d shut the throttle and see those guys take off down the straight, then I’d catch them under braking."

Keeping the front wheel down.

"That piece of software is written by Ben Ingram, our MIT engineer, he writes software for unmanned helicopters. It’s amazing that out of the box it worked. I could feel it. I went out and did a lap without the software on, noted where it was wheelying, then Ben pulled out his laptop and sent a new config file with the wheelie control on it. We had it set fairly conservatively so it wouldn’t do anything funny. The front starts coming up and I can feel the torque being reduced. It doesn’t bob up and down like a porpoise, but you can feel it slowly cutting torque, even with the throttle fully open. It didn’t wheelie in my face, that was a surprise."

Riding a silent race bike on a public trackday.

"We didn’t come to terrorize anybody. We started playing around with software and went out with whatever group was running. We were sort of weaving through people."

The fastest electric motorcycle in the world.

"We need more top speed. We were pretty much reaching the limiter last time at 158mph. We changed the gearing out to go 173, but we’re going to be changing it again as soon as we get home. We’re going to get it for more like 190 to 200."

The current land speed record for an electric bike is 173mph.

"We could easily pass that, but conventional land speed records are not on our calendar. This is designed as a road racing bike and I don’t want Richard Hatfield to be upset with me."

"We haven’t released our 2011 calendar because we’re in negotiations with a lot of tracks. We’ve been invited literally around the world. We can’t say yes to everybody, in fact we have to say no to most people. We can sort of cherry pick the events we want to do."

"The next WERA race that I’m interested in is Miller Motorsports Park in Utah. They have a 3,500-foot straightway that’s long and flat. This bike will do really well on that, I think we could be faster than 180mph. The rest of the course suits the bike too. It’s one thing if the bike can’t handle the rest of the course, only to blow by everybody on the straight, but the whole rest of Miller is like putting green smooth and perfect. It’s a brand new surface, it’s FIM homologated and extremely safe."

"We’re going to show this to crowds in excess of 100,000 people probably like two to three times this year."

The risk of only playing to your strengths.

"It’s not like I’m cheating and saying I only want to race where I can win. I just don’t think it’d be that fun. I want to go to the big boy tracks."

"The exposure we’ve gotten on this so far is just unprecedented for a motorcycle. I think that opens up our appeal to all kinds of people. Commercial battery people like Energizer or Duracell I think would be interested. The Red Bull type of guys I think would be interested. I’d love to eventually sell this platform to an OEM like BMW or Suzuki and have them keep advancing the technology and hopefully get it onto road bikes that people can buy one day."

"You wonder why a 500lbs bike can handle well? It’s because it’s an OEM chassis from Japan. They’ve already done all the trouble shooting and Ohlins suspension fits right on it."

"The electric guys that make their own chassis, I think they’re biting off more than they should be. The good thing is they package better than we do. The bad thing is they have all kinds of flex and handling issues that we don’t."

"Right now, we’re challenging ourselves with increasing the range and making it lighter. We’re hitting it on all fronts. We’re going to reduce the drag area and get in the wind tunnel and then lighten up the motor, lighten up the batteries. We could adapt land speed Hayabusa bodywork."

"We’re looking for an Auto Club Speedway lap time of 1:35.8. That lap time would qualify us for the grid of an AMA Pro Daytona Sportbike race last year. Would we have finished that race? No. We would have finished about half of it even with our front wheel KERS system. What we’re focussed on is figuring out how we make the other half, which is not trivial. It’s by doubling our battery capacity or increasing our efficiency. That’s what I’ve challenged my guys with."

"I want to take away all the caveats and the asterisks and all the people saying, ‘This thing’s fast, but it can only last half a race.’ No, I want to say it can qualify for a Pro race and finish it. We’re halfway there."