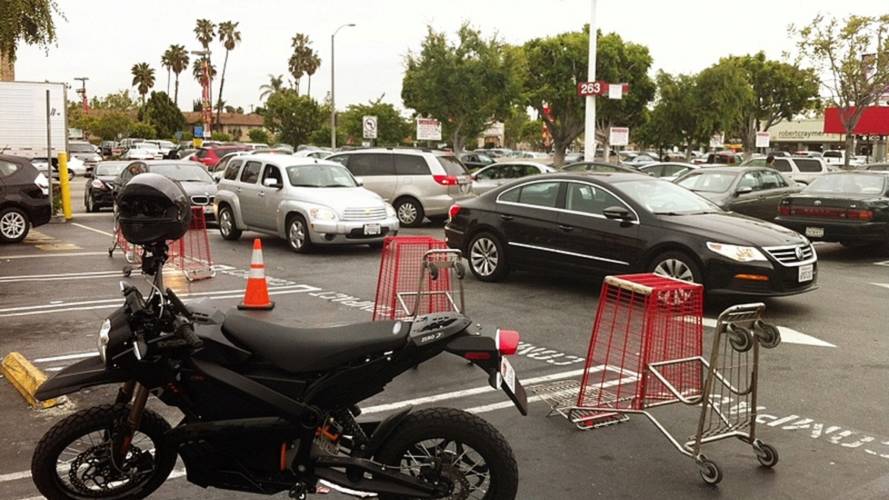 Wow, is it Thursday already? Sometimes you look up from your computer and realize the week’s almost over. And sometimes you realized you promised your readers you’d be giving them regular updates on the 2012 Zero DS you’re riding for a couple weeks. Whoops. It’s been a few days of highs and lows on the electric. I think I’ve totally fallen for it, but at the same time come to the realiza...

Wow, is it Thursday already? Sometimes you look up from your computer and realize the week’s almost over. And sometimes you realized you promised your readers you’d be giving them regular updates on the 2012 Zero DS you’re riding for a couple weeks. Whoops. It’s been a few days of highs and lows on the electric. I think I’ve totally fallen for it, but at the same time come to the realization that I could never actually fit one into my life.

- A high point: running to Trader Joe’s to pick up dinner fixins for me and the NaG, I whizzed past a queue of Priuses, Insights, Volts and Leafs and popped into a not-quite-a-parking-spot where they were preparing to do a food delivery. A guy in one of those Honda FCX Clarity hydrogen fuel cell cars was just parking too and we struck up a conversation. Turns out it’d taken him 45 minutes to get into a parking lot. Why bother? Keeping the wife happy, of course. I laughed at him and told him what I’d done. “Zero emissions?” he asked. “Fuck,” when he heard the answer.

- The above is just another example of why I’m convinced cars are simply a case of collective insanity. Armed with only my Kriega R35, I was able to pick up dinner, desert, a bottle of $2 wine and an impromptu shopping list that mysteriously arrived via text while I was en route. It’s ok, I don’t mind, Trader Joe’s takes me 10 minutes in and out, not the hour plus it was going to take that Honda driver. So what if I have to go three or four times a week? That’s still less overall time than any car driver’s single trip. Judging by the red faces and shouting on every driver in the queue, I’m extending my life expectancy too. Wonder if TJ’s keeps data on how many heart attacks occur in its parking lots?

- Sitting at a light in Santa Monica, a guy in a really nice E30 shouted over to ask if the bike I was riding was electric. Turns out he works for Tesla, but had never heard of Zero. He’s not the only person I’ve encountered in these last two weeks that you’d think would have heard of the brand by now. Other motorcyclists, friends in the media, virtually no one has heard of the company.

- It’s also amazing how many non-riders love the way the DS looks. I look at it and see bodywork that clashes with the mechanical components, too many common parts that don’t seem to mesh with each other (MT-03-alike headlight, then that ginormous plate hanger for instance) and awful graphics. They see an all-black bike that’s totally silent, has weird orange wires poking out of it and a stance that sits high, evoking function, without looking overly aggressive. Seriously, tons of people who don’t even realize it’s electric shout “nice bike!” as we pull into places.

- Saturday night saw what’s likely going to be the largest meteor shower this year. But, I couldn’t watch it because Grant had disappeared hunting, locking all the gas bike keys in his house. With cloud cover and light pollution anywhere within 100 miles of home, there was no way I could get out into the desert or up into the mountains on the Zero. It’s times like that when I’m really over relying on an electric for my sole means of transport.

- Riding home late the other night, I was flat-out on the last bit of highway before home, with two bars of battery showing, when the DS mysteriously cut out. I’m assuming some mix of 85mph and the low charge decided they didn’t like each other. A few seconds of frantic switch hitting and key turning got the thing started up again and we limped home, but suddenly finding yourself sans power, on an already slow bike, on the over-crowded 101, was seriously frightening. Slides I don’t know if I can recover from on liter bikes are much more my type of heart stop.

- Last week, I complained that there was no external indication that the Zero was plugged in or charging. Turns out I was wrong, there’s a small view port on the front of the battery casing and LEDs inside that tell you if you’re actually charging. To see them, turn the bars all the way to the left and put your head where the fender was.

- Sitting at home on Saturday night, I came up with a fool-proof formula for determining where I can and can’t expect to go on the bike. Using the Ground Zero II nuclear fallout calculator, I can program in a 9mt B53 bomb, the largest ever in the US arsenal. This map shows the radius of thermal damage, which is about 18 miles. Center it on my zip code and it gives me an effective range for the bike. Since a full charge with the quick charger takes around 5 hours and that quick charger is big enough that it needs to stay at home, I’m sort of anchored to my house. Then figure in the 60 to 80 mile range I’ve been getting out of the 9kWh battery pack and 20 miles is about as far as I’m willing to go. Since this map is as-the-crow-flies, I figure it’s close enough to the max distance I’m willing to travel from home. Yellow is the extreme for a single trip, orange is ok if I have a full charge, the darker colors I'm free to roam with impunity. As you can see, I’m able to cover most of Los Angeles, but my friends in Long Beach don’t need to duck and cover quite yet.

- Talking to Grant about plans for filming the DS for RideApart. I literally had to shoot down every single one of his location ideas. Spending thousands of dollars a day on a film crew and whatnot means no room for ending up out of charge half way through. Figuring in a worst case scenario of 60 miles, that doesn’t leave room for multiple takes and that long recharge time isn’t going to get done at lunch. Hmmm, I wonder how much generator rental is...

- A low point: “I’m in the mood for snausage,” read the text from the NaG. But, I was Downtown on less than half a battery and she was at work in Santa Monica. I ate at Wurstkuche alone, looking forward to getting on a “Factory” Aprilia Tuono V4 next week. "Electric bikes are stupid." It's times like these that I feel that way too.

I'm living with a 2012 Zero DS for three weeks and updating you with regular (well, semi-regular anyways), journal-style updates. It's the Life Electric.