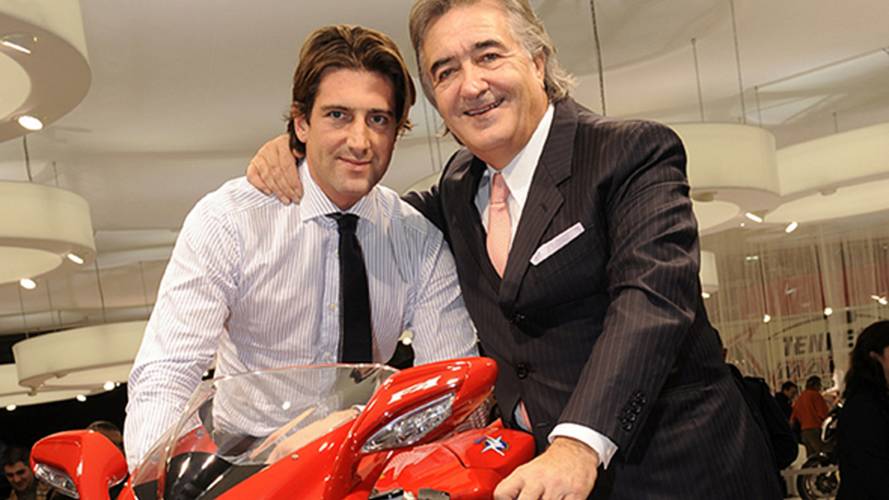 We’ve been trying to make it happen since the deal was announced in August. This morning, it finally did. A frank and open discussion about the future of MV Agusta with its new 30-year-old CEO, Giovanni Castiglioni. This is the first English-language interview a Castiglioni has given since Harley paid the family to take MV back, just two years after  The Motor Company bought it from them. What

We’ve been trying to make it happen since the deal was announced in August. This morning, it finally did. A frank and open discussion about the future of MV Agusta with its new 30-year-old CEO, Giovanni Castiglioni. This is the first English-language interview a Castiglioni has given since Harley paid the family to take MV back, just two years after  The Motor Company bought it from them. What’s he tell us? Well, that the three-cylinder, 675cc MV Agusta F3 should make 140bhp, for starters.

Giovanni with his dad, Claudio.

On getting MV back

“It was quite a difficult job, even more difficult than I think anyone knows, but after nine months of dealing, we managed to acquire the company from Harley and I think it’s great both for the company and for our personnel. And, I think, the image of an Italian brand, even though Harley did a very good job in those two years.”

“It is very exciting. My wife thinks that I am completely crazy to do something like this. Sometimes passion comes before rational thinking.”

“Unfortunately, over the two years with Harley-Davidson, the company got used to spending lots of money because there was a big company behind it supplying lot of money to the company every month. We have had to lay off a bit of personnel, we have reduced the costs of things that are not compulsory to the company. It is tough, not easy.”

“Harley-Davidson invested a lot of money in the company, over €60 million in capital. All the investment in the four-cylinder line, the F4 and the Brutale 990 and 1090, and last year they invested another €10 million on the three-cylinder platform that we will release next year.”

“The best thing they did in the company was the amount of cash they invested in new products. The negative thing is that Harley-Davidson is a multi-national company and it’s a very heavy company in terms of management which, for a small company like MV, isn’t a great combination.”

“We are in supersport and hypersport  at the moment. We are also looking at other segments but we we need to do the best we can in our market, where our brand is recognized. I absolutely agree with you that the market for sportsbikes is shrinking, probably it will shrink more next year, but MV is recognized for being a sport brand. Don’t forget that we also have the Cagiva brand, which was great in the past for bikes like the Elefant and those kinds of bikes. I don’t think today is the right moment for MV to move into sport touring or proper touring bikes, not at the moment.”

On the MV Agusta brand

“Design, heritage, tradition and technology. We emphasize a lot on our logo. It’s one of the only brands that really has an important logo that reconnects to the past, to the airplane company, to the engineering company where MV started. In terms of product, MV is different from our competitors in its uniqueness, its exclusivity. I believe that whenever MV makes a product, we have to make always something faster and more powerful than anyone else. Because, when you buy an MV Agusta, you spend more, so you’re looking for more. That’s what we’re aiming for for the three-cylinder.”

“The design of the bike, I have to say, It’s really unique, but it has a family feeling of an MV. The engine is really different from the competitors because it is full ride-by-wire; it’s completely new and has more performance. At the bench, we are now around 137bhp, so we think we can reach 140. This will be the first three-cylinder that is completely electronic, completely ride-by-wire and there are some specs in the engine, that our engineers will need to tell you about, that are different from the others.”

“The F3 will be the smallest bike that’s ever been produced in this category. It’s like a 125.”

“At the moment, we’re finishing our engineering and prototyping. The engine already did 70,000 miles without any problems. We have good results of reliability and good results of performance. Let’s say that we have done 90 percent and now have 10 percent to go. Production will start in October of next year.”

“The pricing is already decided. The price will be €11,500, which is in direct competition with the rivals . There is a small premium because an MV is a rich bike, but with all the competition between €10,500 and €11,200, we’re not far above. It is a really competitive price for an MV.”

“For the American Market? To be competitive in the US we will have to sell the bike around $12,000 and that makes it difficult because, with the dollar still going down, it is very difficult for us to be profitable in the country. Almost impossible.”

“Harley wanted to invest in the company to make it a 40,000 units-a-year company, sort of Ducati-style. That’s not the plan now. Our vision is that we will increase our capacity and production within five years, with three new models, to a maximum of 10 to 12,000 units. I think that level is the maximum because with more, we start to dilute the brand like some of our competitors are doing.

“Harley-Davidson had the plan to re-launch Cagiva, then they stopped because of the economic distress there. Concerning right now? We will invest only in MV Agusta, the company needs to focus on only one objective at the moment.”

“If you go and look at the sales of the Yamaha R1, Valentino Rossi won a couple championships with Yamaha, but the sales of that bike did not increase. Ducati is racing and spending tens of millions per year on racing, but you see that to increase their volume they’re focussing on non-sport models.”

“I fully believe that racing is not linked to an increase in production of the existing models we have. I think that racing is really necessary and great for the health of the company in terms of being recognized by a larger group of people. Even my grandmother knows Ducati now, because of racing. But that’s the good part of racing, concerning sales? I don’t believe there is a connection.”

“For the amount of bikes that we want to do, I don’t think that we need to race. For two reasons: First, because it doesn’t increase sales. Second, because racing is expensive and MV needs to develop its product, not go racing. There is another reason. Racing in the Italian Superbike Championship, that we won, we saw that our engineers, they don’t care any more about the production, they just want to race. We need to focus on our product.”

On the EICMA motorcycle show

“We haven’t decided yet if we are going to EICMA or not. The main reason is that I don’t really believe that EICMA is so important for MV and, especially at the moment, I would like to concentrate on the economic efforts of the new company into the new products. So spending $1 million for five days? It is better to spend it on the product.”

“But, maybe we will just go with the F3. Just a big white cube, sort of trendy architectural stuff with just the F3 inside so that people see that MV is there, that we’re investing in new product and that the F3 is designed and ready to go. I think this is a good message to go to everyone, but without having a very big spend. We may go just to show our clients that the F3 is there and that they should wait another 10 months before buying something.”

On what he wished MV would have done differently, pre-Harley

“You’re my age. If you think back 10 years ago, you didn’t even know what MV Agusta was, so to build a brand that, in 10 years, that was forgotten by everybody, I think we did a good job. If the company would have been financially stronger, we would have been in a better position now.”

“We are investing €10 million over the next 10 months to industrialize the new three-cylinder F3.”

“So that’s the first two products that we are doing, then we are also working on the Brutale 675, a small Brutale that will be priced below €9,000.”

On hiring Massimo Bordi, the engineer that designed the Desmoquattro cylinder head and engineered the Ducati 851 and 916

“He is like a military guy, that’s what MV needs now. He will be the manager of the R&D department.”

“He is a very good manager. In the last three years he managed Same Deutz-Fahr, which is a €3 billion company that makes tractors sort of like a small John Deere. He launched that company very well.”

“He did 22 years at Ducati. He did a very good job both in our time, when we used to own Ducati, and in the times when Ducati was under TPG.”

On where he goes from here

“Today we start from zero. The company has no debt, we are financially strong, we have a good amount of cash and we are investing in new product. I think that is a good start.”