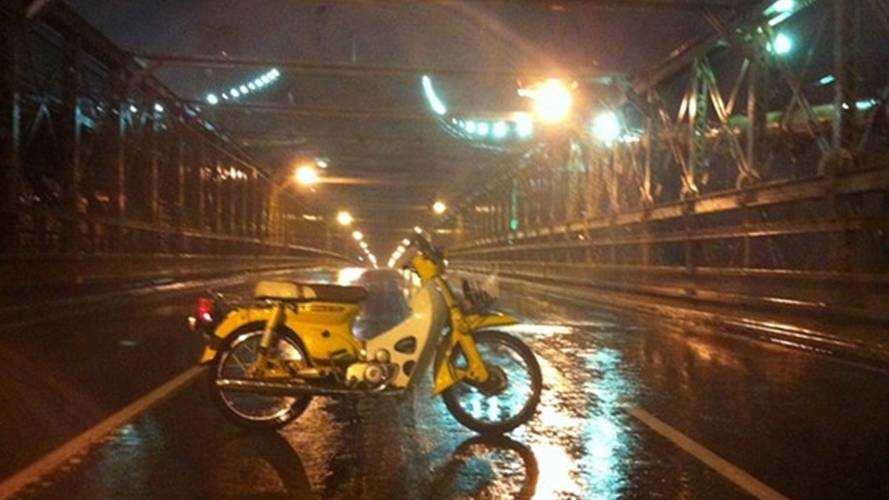 The stage was set for biblical floods: even the city itself thought New York had only a day left to live. Bridge tolls were suspended, the Staten Island Ferry was docked and all subways and busses had been relocated to higher ground or inside tunnels. Sunday’s 8:30 AM high tide would coincide with the eye of Hurricane Irene and Mayor Bloomberg had issued a mandatory evacuation of flood zones. N...

The stage was set for biblical floods: even the city itself thought New York had only a day left to live. Bridge tolls were suspended, the Staten Island Ferry was docked and all subways and busses had been relocated to higher ground or inside tunnels. Sunday’s 8:30 AM high tide would coincide with the eye of Hurricane Irene and Mayor Bloomberg had issued a mandatory evacuation of flood zones. Non-compliance was punishable with a $500 fine and up to 90 days in jail. Perfect weather for a motorcycle ride.

I went outside to check on my motorcycle a little after midnight on Saturday. The streets of Brooklyn were almost totally deserted and the rain wasn’t torrential. It seemed worth getting wet to experience empty roads and perhaps see some floods and potentially help people out. I donned a rain slicker, fired the Cub up and headed out from Ft. Greene toward Dumbo. I treated red lights as stop signs; it seemed awfully silly to wait in a downpour when there wasn’t a single car in sight at the vast majority of the intersections. The only person I saw on a ten-block tour through the rutted cobble stone streets was a police officer guarding an entrance to a subway. Near the waterfront, I rode through a massive puddle I hadn’t expected and a huge V of warm water shot over my feet. It was on!

On my way home from Dumbo I saw — to my amazement — that the Brooklyn Bridge was still open (investigation later showed that it stays open in winds up to 60 mph). Rather than going home, I got on the bridge. It was almost empty. I saw one car on the first half of the bridge; after it passed I stopped until the car disappeared. I stood in the middle of the roadway and pretended that New York was a ghost town. Nothing else came by and then I snapped out of it and continued to Manhattan.

Sixth Avenue was eerily empty until West 4th — north of that the odd taxi prowled the streets and ruined the effect. Then the wind seriously picked up. Gusts picked spray up off the roadway and blew big drops into my eyes so hard that I had to shut the visor. It was touch and go for a little while; puddles camouflaged potholes and raindrops camouflaged potholes — I had the feeling that the bars could be ripped from my hands at any second by a hidden cleft in the pavement.

Times Square had maybe twenty people in it; some shirtless Australian men were out splashing in the puddles. Other people dribbled out of their hotels to see what was going on. They found that not much was going on.

My girlfriend texted me to come home, so I headed down Seventh toward Canal. One manhole cover was dislodged and was only partially covering the hole — glad I didn’t hit that while bombing nearly blind down Seventh. Between Seventh and Broadway there wasn't a single car on Canal Street.

After heading back over the Brooklyn bridge (again, a solitary cab dulled the sensation of apocalypse) I decided to check out the BQE. Deserted. There was a headwind so strong that the Cub could barely hold onto third gear. Before I got to my exit, a solitary SUV roared past me on the empty highway with 2 wheels in my lane.

This morning a light rain seemed like it might be the eye of the storm, but it gave way to an overcast day. The FDR is flooded and so are a few neighborhoods, but Irene was only a Category 1 (Katrina was Category 4 when it made landfall) and NYC was well enough prepared that the storm felt like more of a Nor’easter than a hurricane.