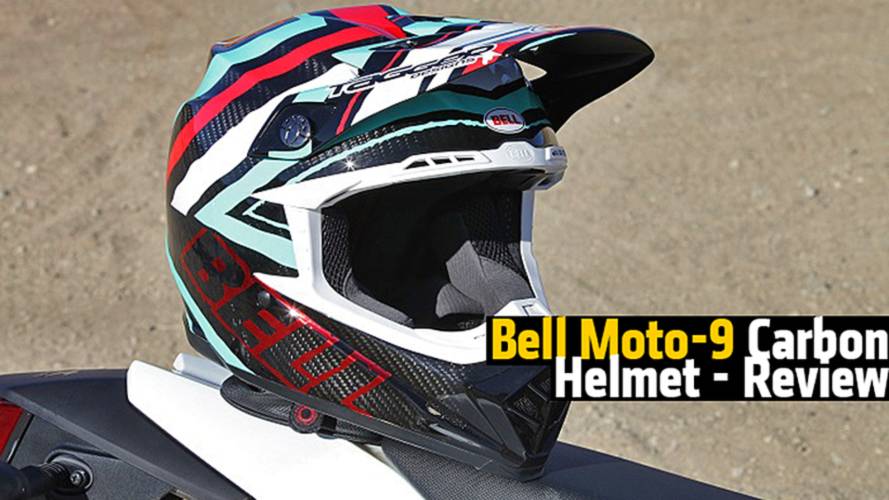 We review the new high-end Bell Moto-9 Carbon offroad helmet. Is it worth the investment?

If you’re like me, you’ll expect to take a few tumbles each time you kick-start the dirt bike. That’s one of the reasons I ride on dirt – to find the limits, learn what to do in low-traction conditions, and not get hurt too badly when I eat dirt.With this in mind, the last thing I wanted to do was dole out hundreds of dollars on a helmet I’d scuff and scratch. So I started with a cheap Shift helmet, which did the job admirably for several years. However, I made the mistake of visiting too many bike stores, and soon fell in love with a Fox V4 Reed Replica. It was a birthday present, but at $575, I was no longer willing to sacrifice it so readily.

Already realizing that more than 500 smackers was far too much money for a dirt bike helmet, I was skeptical about trying the Bell Moto-9 Carbon. First of all, it’s utterly gorgeous, which made it singularly unsuitable for my type of dirt bike riding. Its high-tech carbon fiber construction and stunning paint scheme made it too good to get dusty, never mind the worst that can happen during a day on the trails. Yet in the interest of this RideApart review, I put aside my reservations and headed out to Hungry Valley – a recreational area for off-road vehicles about 90 minutes north of Los Angeles. With 130 miles of trails, it’s a wonderland for riders and drivers looking to blow off some cobwebs.

As the name suggests, the Moto-9 Carbon uses carbon fiber construction, which accounts for it tipping the scales at a mere 3.2 lb. The chin bar is lined with EPS plastic, presumably for a little more flexibility. It has a Flying Bridge visor that is secured with QuickFlip screws. These screws are designed to be adjustable even when the rider is wearing gloves, making it easier for the visor to be raised or lowered, and tightened into position if the conditions should change during a ride.

The visor uses screws that can be adjusted with gloved fingers while on the bike. The inner ventilation channels were also very effective.

The lining uses X-Static padding that is removable and washable. It works in conjunction with Bell’s Velocity Flow Ventilation system that introduces cool air and efficiently exhausts hot air out the back.

In case the unthinkable happens, the lining utilizes the Bell Magnefusion Emergency Release System (MERS). This is designed for emergency responders to gently remove the helmet from a rider’s head in the event of a serious accident. By allowing the cheek pads to be removed separately, the magnetic system should reduce secondary neck or spine injuries. In fact, a sticker on the helmet confirms it has an approved Eject Helmet Removal System.

The color scheme on the supplied Bell Moto-9 Carbon helmet is called Tagger Scrub. The vivid white, red and aqua stripes contrasted superbly with the visible carbon weave, and were complimented by red foil Bell lettering.

The first thing you notice about the Moto-9 Carbon is its weight, or lack of it. Its carbon fiber shell is simply stunning. Predictably, you don’t notice you’re wearing it shortly after you start riding. This can be attributed both to its construction and the comfortable X-Static lining.

I should point out the helmet was a Large, while I normally wear a Medium. The fit was still good, or I wouldn’t have worn it, but the larger size might have contributed to the excellent airflow inside the helmet. That, or the Velocity Flow Ventilation system is as good as they say. Either way, despite temperatures up to 95 degrees F, the Moto-9 was extremely comfortable to wear. In fact, I’d have to say it’s the most comfortable motocross helmet I’ve used to date.

The specs boast a Magnefusion Magnetic Strap Keeper, which basically holds the flappy end of the chinstrap secure once the strap is tightened. It works like the press-stud most manufacturers use but should be less fiddly. I’m not sure if it was because the padded chinstrap was new or simply too thick, but I had problems securing the strap and was never able to use the Magnefusion Keeper. However, this was an insignificant blip on an otherwise stellar helmet.

Although I didn’t adjust the visor during my ride, it's easy to set it to how you want it before you venture out, thanks to its QuickFlip screws. Beyond that, there was little to report. The Bell Moto-9 Carbon functioned as a motocross helmet should – there was no issue using goggles and the visor gave good sun protection.

Despite very high temps and incredibly low humidity, the lightweight and well ventilated Bell Moto-9 Carbon was a pleasure to wear, reducing rider fatigue in these conditions.

Although there’s often little to choose from between most motocross helmets, the thoughtful design of the Moto-9 Carbon brought some distinct advantages. As Bell’s flagship motocross helmet in its current 2014 range, the carbon fiber shell is beautiful to behold and easy to wear. It’s lightweight and well-ventilated, allowing you to spend longer in the saddle with less fatigue.

Everything from its magnetic cheek pads to the visor screws had come under scrutiny and benefited from Bell’s extensive helmet-building experience. And while we wouldn’t recommend this expensive helmet to beginners, it would be money well spent for the more experienced rider.

Overall, the helmet exudes quality, as it should for the price. The fit and finish of all the components was exemplary, with no lose trim or untidy seams. We genuinely found no fault with the Bell Moto-9 Carbon.

The MSRP for the Bell Moto-9 Carbon is $549.95, with few retailers appearing to discount the price at present. It is available in ten different color options, with more details available at bellhelmets.com/moto-9-carbon

Bell offers two other dirt helmets, including the MX-2 from $179.95 and the SX-1 from $99.95, which might be better suited to riders on a budget or with less experience.

With its exposed carbon fiber weave contrasted by the bright colors of the Tagger Scrub color scheme, the Bell helmet looked as good or better than anything we’d seen before.