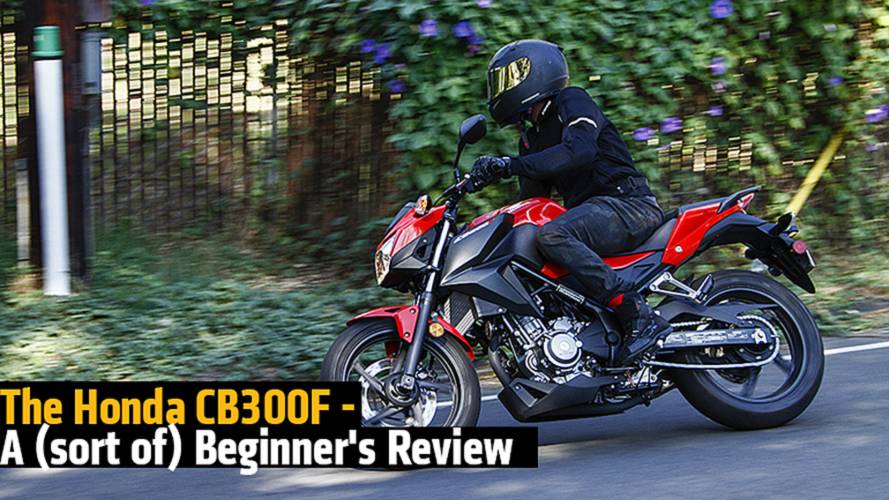 Wherein we take a look at the all-new Honda CB300F, an almost perfect beginner's bike.

“Confidence is a lot of this game or any game. If you don’t think you can, you won’t.” NBA legend Jerry West said this, and it's a fitting quote in regards to basketball and… well, motorcycle riding. I own a 2011 Ninja 250R, the quintessential beginner bike. This is my first bike, which I’ve owned for 1 year, putting about 4,000 miles on it. The 300 had just came out but I still opted for the 250 because I couldn’t trust myself on anything higher. However, after spending some time on this CB300F, I can assure you: a 300cc bike IS the new beginner standard.

The first thing you'll notice with the Honda is the smoothness. The clutch action, engine braking and suspension are all butter smooth. Honda’s 286cc single-cylinder engine features a counterbalanced crankshaft which effectively reduces vibration to nil. On long freeway rides, my Ninja would leave my hands numb after 30 minutes. Making the same trip on the CB300F was much more comfortable, because of the inherent goodness of the naked bike ergonomics, but also because of the 300cc thumper.

The engine is the exact same found in the CBR300R and the extra 37cc makes up for the lack of low-end torque on my Ninja. The added torque and the close-ratio 6-speed transmission made my daily commute much less of a high-revving affair.

I often found myself simply adding throttle to overtake at freeway speeds; the same overtake would have required a downshift on the Ninja. The gas mileage is improved, according to Honda, but it was hard to tell has we were having too much fun thrashing the bike through the gears all the time to get consistent numbers.

Within 5 minutes of receiving this bike, I had it on a canyon road and it felt right at home. This bike handles the "esses" and hairpins like a champ. The rear end felt especially planted in comparison to my Ninja and that can probably be attributed to Honda’s Pro-Link rear shock. However, the front end could use some improvement.

On high speed turns the front didn't feel as planted as my Ninja. Unfortunately, only the rear is adjustable so if you are looking for a track bike or a true canyon carver, you may find the CB to be limited.

Commuting is where the CB300F really shines. My Ninja is stiffer, which is great for canyon runs but rough when dealing with the ragged roads of Los Angeles. Potholes, cracks and uneven roads were essentially a non-issue on the CB.

Lane splitting may not be legal everywhere but it’s worth noting that the positioning of the side mirrors never got in the way of the mirrors on other cars. Maneuvering in heavy traffic was a breeze, which is an attribute owed to the CB’s reduced weight. Coming in at 348 lbs, it’s a whole 27 pounds lighter than my 250R.

The added benefit of the single cylinder on the CB300F is its narrow build. This helps you grip the tank and aids in getting you up and off the grips. The bike is essentially the sear same height as last year's Honda CBR250R, but it has a skinner profile, so you're feet are even more together at a stop.

On my Ninja, the tank is larger, the body position is forward and over the front forks; you still sit higher compared to a supersport. This position is an awkward middle ground that quickly becomes uncomfortable on an extended trip.

I kept asking myself, would I buy this bike had this been out when I was shopping for my first ride? The answer is, absolutely. I admit I did not like the handlebar setup at first. I considered it too far of a departure from the supersport position I wanted to get used to prior to upgrading. None of that matters when you actually ride the bike because you really don’t feel too far out of your element.

But therein lies the key: comfort. New riders can benefit from the upright position as you are in a more relaxed state, added throw on the bars and a less aggressive and sometimes intimidating feel. You can get comfortable gripping the tank like you should because it’s narrow. With comfort comes confidence and the only way for these skills to take root is to ride as much as possible. Honda has checked all the boxes, making the CB300F the perfect learning tool.