10 Things You Need to Know About Germany's Nurburgring 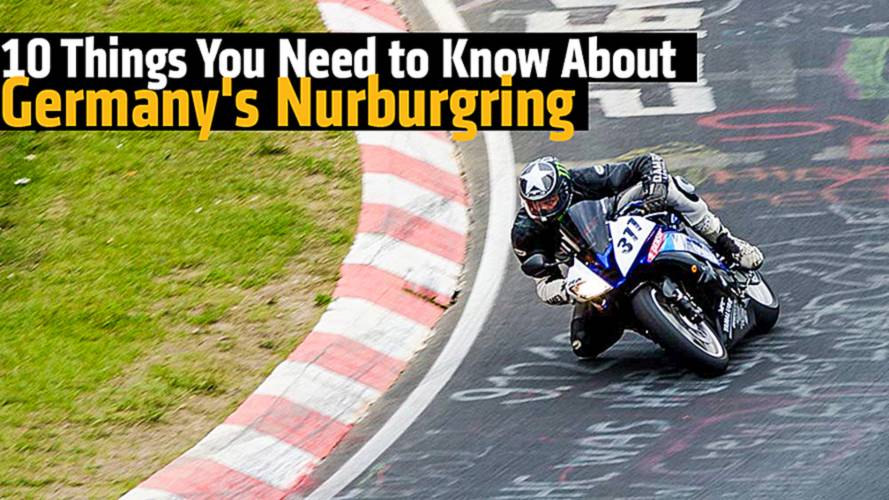 10 Things You Need to Know About Germany's NurburgringThe world famous Nurburgring is a dream destination for auto enthusiast and motorcyclists...

The world famous Nurburgring is a dream destination for auto enthusiast and motorcyclists alike; a gigantic, 13 mile race track that's been around since the 1920s. The Nurburgring is the place we Americans can only dream of, but there are many things you may not know about the track. We're here to educate you, even if you never make it out.

Nurburgring: the Disneyland of Motorsports

Located 60 miles south of Cologne and 20 miles east of the Belgian border, the famous Nurburgring is at the heart of German motorsports, attracting millions of visitors each year. As a tribute to internal combustion engines it has been witness to glory, tragedy and world records for close to a century. It's safe to say that anything with wheels has been tested or raced on its famous tarmac. There are two distinct tracks that total the Nurburgring: the GP circuit and the 12.9 mile Northern Loop or Nordschleife.

READ MORE: A gyrocam, a ZX-10R and the Nurburgring

The Nurburgring is most notable for hosting the World Super Bike Championship each year in October, but there is much more to the famous track known as the “ring.” The Nurburgring is a massive facility nestled in the German Eifel Mountains and holds a special spot in the hearts of German motorsports enthusiasts. The GP track was built 1984 and is currently host to WSBK, Formula 1, IDM (German equivalent to the AMA) championships and other assorted 4-wheeled competition. The Nurburgring Ring Werks complex is at the entrance to the GP circuit; here you can purchase a Nissan GTR if you so desire or settle for a Ferrari Polo shirt on your way to the grandstand seating along the 928-meter front straight. The place has a bit of everything - a GoKart track, roller coaster, shops, restaurants; locally brewed beer and motorsports memorabilia are the main attraction in the Ring Werks. To forgo using cash, the Ring card can pay for just about anything in the entire Nurburgring facility; the cards can be purchased at special machines around the circuit or in the shops within the Ring Werks.

More Than Just a Twisty Tarmac

During major events, the Ring Werks and surrounding areas are packed with exotic cars and motorcycles. It's not uncommon to see a $ 500,000 McLaren sports car and a Desmosedici RR parked next to each other with their owners chatting about the lines they take through said corner on the Nordschleife. Not only does the circuit and associated Ring Werks have everything a motor-head would desire, it hosts the annual music festival Rock em’ Ring. Bicycle races and triathlons are also held at the Nurburgring and there are miles of mountain biking and hiking trails that overlook the Eifel forest and Nurburg Castle. If your family, wife or girlfriend thinks motorsports is as fun as watching paint dry, there is something there for everyone.

Construction of the Nordschleife broke ground in 1923 and was opened in 1927, serving until 1980 as the host to the Moto GP championship, at which time it was deemed too dangerous for world competition. Nordschleife translates as ‘Northern Loop’ and is 12.9 miles of twisting tarmac that looks and smells like a racetrack but poses as a public road. Armco barriers parallel most of the Nordschleife’s 20.8 km track; with rumble strips and the smattering of gravel run off, the ‘Northern Loop’ has more than 300 meters of elevation change. A total of 40 left hand and 50 right hand corners challenge riders and machines - most of the corners are blind and there is very small room for error, if fast laps are the goal. Formula 1 Legend Jackie Stewart coined the term “Green Hell” as the Nordschleife’s nickname and the moniker has stuck ever since.

The entrance to the Green Hell has a normal looking gate like the one you would see in a parking garage or airport. Brave pilots are only required to swipe a ring card for entry, then the subsequent green light and lifting gate arm predicates full throttle onto the circuit. The 20.8 km (12.9 mile) stretch of pavement is a legitimate public toll road, requiring a fee of 27 euro for 1 lap. The circuit falls under the same laws and regulations as any other Autobahn in Germany. Touristenfahrten is translated in English as "tourist driving", and are held several days a week during the spring and summer months.

EU (European Union), British, French, etc. license plates will only be accepted through the entrance gate; all vehicles on the Nordschleife are required to be road-going only, no track bikes or track-only cars are allowed through the gate. With the absence of police, and no speed limit, motorcyclists are required to have their proverbial scatology together. Not only are the German road rules enforced on the Nordschleife, there are several types of flags used by the track marshals that must be adhered to while underway. There are also ring cars that patrol the track to keep things from getting out of hand and are used to handle car wrecks and manage traffic - it’s a busy job handling thousands of visitors over a summer weekend.

Mixing it up with cars through blind corners is a hair-raising proposition and the Nordschleife sees accidents on a daily basis. An ADAC (German Automotive Association) life flight helicopter is dedicated to serve the Nordschleife every day of the year it's open. There is a reason why there is no longer motorcycle racing on the Nordschleife; it’s narrow and has no real run off to speak of. There are a few patches of gravel but the majority of the road circuit is lined with pine trees and Armco barriers. Spilt oil from auto crashes and rocks in the road way are not an uncommon site while riding the Nordschleife. When taking into account its massive length, riding here takes due diligence.

In 2012 a brave and skilled Englishman by the name of Andy Carlile ran the 19km course aboard his 2005 Yamaha R1 during a Touristenfahrt in a blistering time of 7:10, an unofficial record for a motorcycle, due to the fact that lap-timers, on-board cameras and time trials are forbidden on public driving days. Carlile’s lap time is astounding considering he was riding through traffic during the record-breaking lap.

Economic woes have unfortunately caught up with the Nurburgring, which is actually owned by the state government of Rhineland-Palatinate and not by a private entity. There are many rumors speculating about whom the bankrupt Nurburgring will be eventually sold to, but not until early 2015 will anyone know. Bernie Ecclestone, British billionaire and F1 owner was linked to a possible purchase of the track and facilities for 165 million dollars but that has not come to fruition. The big (and rightfully so) concern is that the Nurburgring will be bought and become a private facility; as luck would have it, the German government passed a law stating that the Nordschleife will always remain a public venue, but left out the GP circuit. In 2012 over 300 million dollars were set aside to keep the Nurburgring open and operational by the Rhineland-Palatinate government. The daily functions of the Nurburgring move forward every day and to most fans and visitors of the Nurburgring the bankruptcy goes unnoticed. Time will tell, but the coveted Nurburgring is as important to Germans and European motorsports fans as NASCAR is to Americans; hopefully the show will go on as it has for years.

If you find yourself in Germany, the best way to enjoy riding the Nurburgring GP circuit is through a track day organizer like Dunn racing.de. They are based out of the Nurburgring and prices are good for a day of riding. For the Nordschleife, if racing motorcycle against supercars and Porches is not your cup of tea ADAC.de offers a motorcycle-only Nordschleife training package several times per year. Riding the Northern Loop is a unique and amazing experience if done with the right preparation and mindset. The Nurburgring is one of the last bastions of speed and motorsports passion, so if you can, go see it or better yet - go ride it!