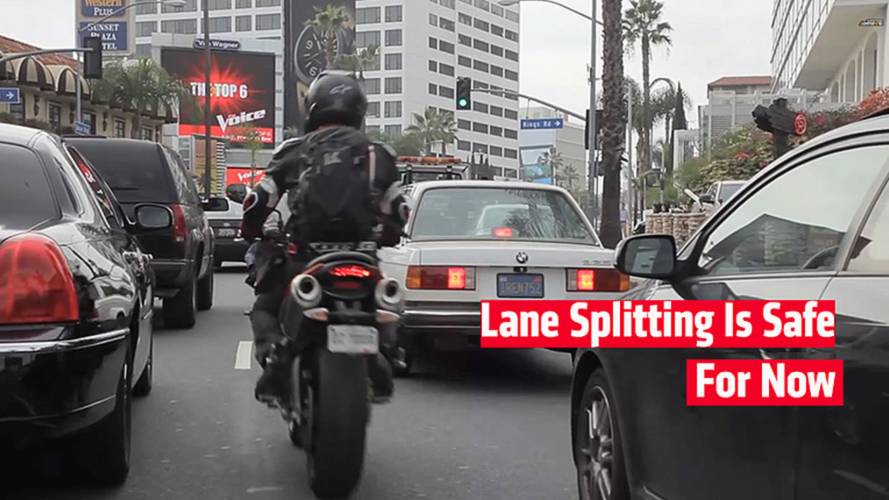 An Anti-Lane Splitting law which could have prevented motorcycles from using their vehicles safely and efficiently has died the California Senate.

A bill that could have made motorcycle lane splitting illegal in California has died due to lack of popular support. Surj from LaneSlittingIsLegal.com gives us the scoop. — Ed.

January, 2014 has been an upcoming dark spot on the calendar for us in the California motorcycle community. HQ—SB350, the bill that would introduce substantially restrictive limits on how we split lanes in California, was supposedly going to be revisited in the new year. We’ve been hounding Senator Jim Beall, who introduce the bill last February, for status updates, without much luck until now. We’ve just received confirmation from a staffer in Senator Beall’s office that SB350 is dead — for now.

The staffer tells us, "Senator Beall does not plan to take any action on the bill next year in light of the lane-splitting guidelines issued by the California Highway Patrol. He wants to evaluate how well the guidelines work and as well as their effectiveness, which may obviate the need for any legislation."

SB350 — which was referred to the Senate Transportation and Housing Committee last February — would have amended the California Vehicle Code by adding the following:"21658.5

(a) Notwithstanding any other law, and except as provided in subdivision (b), when a highway has been divided into three or more clearly marked lanes for traffic traveling in the same direction, a person operating a motorcycle shall not pass another vehicle in a portion of a lane occupied by that vehicle unless the following conditions are met:

(1) The passing occurs during traffic congestion.

(2) The passing occurs at a safe speed.

(b) This section does not apply to a peace officer in the performance of official duties."

The bill was ridiculously vague and riders argued about what the bill actually changed: did it restrict splitting to roads with three or more lanes in the same direction or only apply to roads with three or more lanes? We then quickly heard — unofficially — that the bill was on hold until January, 2014, supposedly to allow for the Berkeley SafeTREC motorcycle crash study to be completed. Today, we’re breathing a massive sigh of relief at the apparent abandonment of the bill.

We’ve inquired with Beall’s staff as to whether the 2013 OTS Lane Sharing Survey results, preliminary data from the upcoming OTS-funded, Berkeley SafeTREC motorcycle crash study (which we’ve heard isn’t negative) or CHP PR efforts around lane splitting influenced this decision. We’ll update this article as we get more information.

That said, “does not plan to take any action,” isn’t as awesome as if they’d said something like “we’ve abandoned this bill because, let’s face it, motorcycles are awesome and lane splitting is good for everyone.” But we’ll take it.

For now, this means that going into 2014 — more than ever — that riders need to be good ambassadors for lane splitting and motorcycling in general. Pay attention to the CHP lane splitting guidelines: keep your speed differential reasonable, don’t split when traffic is moving too fast, maintain a consistently high awareness of your surroundings on the road. Those of you who split crazy-fast and regularly hit mirrors while crying about how the “damn cagers” are always cutting you off, need to cut it out. It’s up to us as riders to keep Senator Beall (or some other politician) from deciding (again) that banning lane splitting/sharing/filtering is a good way to score points with California drivers who are frustrated with “idiots on donor-cycles” that “come out of nowhere” and “weave in and out of traffic” and “cut in line."

Do This: How To Lane Split