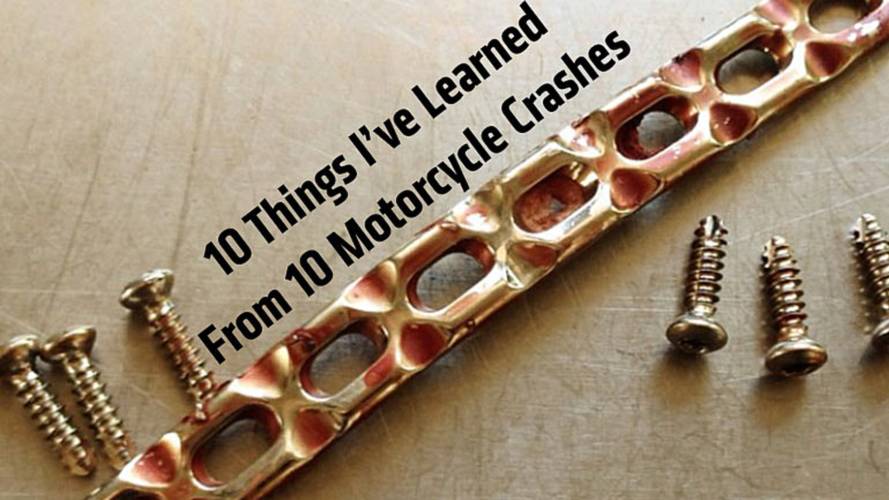 Lessons in safety and life learned from motorcycle crashes. Some crashes have hurt me, but each has made me a smarter, safer rider.

I’ve had a few motorcycle crashes in my time. Some have hurt me, some I’ve walked away from. I’d like to think each one has made me a smarter, safer rider. Hopefully, by sharing what I’ve learned, you can be too, without all the exposed butt shots on the Internet. This is 10 things I’ve learned from 10 (or so) motorcycle crashes.

1. Some Gear Works Better Than Others

When we shot that run-what-you-brung flat track episode and I was riding a 9 bhp kid’s bike (don’t ask, it wasn’t my choice), all the guys we were racing with made fun of me for wearing a race suit, Tech 10s and a full-face helmet. Well, I’d crashed in all that gear before and I knew it would protect me, even if I ended up getting run over by some hipster in a novelty helmet on his 500 lbs Triumph. At a subsequent race, one of the no-armor crowd broke his back. He wouldn’t have if he’d been wearing anything like the gear detailed above.

Even if you don’t have the opportunity to crash test gear to learn what works, just apply some critical thought to the gear you choose to wear. Does the elbow armor extend all the way down your forearm? If not, your forearm is exposed. Do your gloves leave exposed skin between their cuff and your jacket? Don’t trust ‘em. Is the back protector in your jacket a soft piece of non-CE foam or a hefty plastic-and-foam, CE-rated piece of armor? I don’t know about you, but I like the fact that my back works.

I recently “loaned” an entire riding outfit to a buddy who was beginning to ride: a $1,200 Alpinestars jacket complete with BioArmor in the shoulders and elbows, a CE2 D30 back protector and Astars chest armor; matching $1,500 pants with BioArmor; $450 Supertech R boots, $240 GP Tech gloves and a $400 AGV AX-8 Dual helmet. He got wiped out by a car and now he pesters me nearly every day to help him fix his bike. But, the point is that he’s around to pester me!

The above is a slight case of overkill, but expensive gear is expensive for a reason — it works. If you can’t afford the good stuff, buy a cheaper bike. Money you spend on safety gear is the best kind of insurance — it prevents injuries in the first place.

2. But Any Gear Is Better Than None

Boy did I learn this lesson the hard way. When I crashed about a year ago, I was wearing a good helmet, good jacket, good back protector and good boots. What I wasn’t wearing was motorcycle pants. The Levis shredded the second they hit the pavement and I walked away with a fractured coccyx, half my butt scraped off, a two-inch hole through my knee, road rash on my legs, two broken ribs (from torsional twist) and the existing metal in my left arm pulled itself free of the bone, shredding that in the process.

All the lower body injuries would have been prevented by wearing my Roadcrafter or any type of real motorcycle pants. It’s as simple as that.

X-ray of the metal in my left arm that pulled itself free of the bone during the crash.

3. It’s Your Palms That Take The Impact, Not Your Knuckles

My arm and ribs might have survived the above crash had my gloves been equipped with palm sliders. While most gloves go heavy on armor for the top of the hand, they ignore the base of your palm. Because we humans instinctually try to catch our falls, that’s typically the first thing to touch down, taking the biggest impact forces. Not only do palm sliders prevent scaphoid fractures, they prevent your hands from “grabbing” the pavement and directing all that force straight up into your wrist, instead sliding and shearing the forces away from a straight path.

All that armor on my knuckles? It just focused a subsequent impact into its unpadded edge, biting the back of my hand and creating a scar that’s still there.

4. Get Back On The Horse

A few years back, when I lived in New York, I hurt myself pretty badly in an accident and didn’t ride again for a while. I was scared to. That created on-bike confidence issues that persist to this day and, well, I just wasn’t myself without bikes.

This last crash was my worst ever, but I started riding again just two weeks after I got home from the hospital. I couldn’t do it for long and I was pretty darn timid, but I was riding. It took me a while to get back up to speed, but at least I was working on doing so. That made a huge psychological difference in my recovery, even if I was very slow for a long while.

5. It’s Always Your Fault, No Matter What

Here’s the thing about riding a bike: you’re taking your life into your own hands. There’s no steel safety cage, no airbags, no crumple zone, its just you and your wits against the world. If you ask me, that’s what makes riding so great, but it also means you need to make a fundamental shift in your thinking. It doesn’t matter what it says on the police report or the insurance papers or that the teenage chick was texting her boyfriend when she hit you; all that matters is she hit you. And you could have prevented it, you needed to, it’s your life, not hers.

So go out there and actively take your own life into your own hands. No excuses. Someone hit you from behind at a stop light? Why weren’t you flashing your brake lights? Why didn’t you slow down early to bring them to a controlled stop? Why were you stopped in the lane and not on the margin?

Car turn left in front of you? Why didn’t you see it coming? Why couldn’t you brake harder? Why weren’t you more visible?

You have the tools to ride safely, it’s up to you to use them. No one else is going to do it for you.

When I crashed last year, Jon’s wife Nikki changed my grossest bandages. Sean made sure to keep me in tacos, Mark picked me up and took me on field trips in his car so I could get out of the house. Mollie and Sam made sure I had a roof over my head and food in my belly. Another friend also named Mark drove me to the hospital while I bled all over his car. And pretty much everyone I know had to put up with months of slack and flake and gimpiness. I’m still friends with the people who understood and helped and I’m not friends with the ones who didn’t.

Want to know how much you’re truly capable of? Hurt yourself in a life-and-death scenario. You’ll learn whether you’ve got fight or flight and the adrenaline that kicks in after makes possible feats of survival you’d have never thought possible. You’re much stronger than you think, you can deal with much worse problems. You can overcome. Knowing where your limit truly lies will make you a more confident person in everyday life. You will learn who you truly are.

Narcotic pain killers are one of the worst crimes perpetrated by our health care system. They don’t actually do a great job of killing any pain, but they do poison your mind and body, making you weak, sick, constipated (don’t laugh, it sucks), screw with your mind and possibly lead to addiction. As soon as possible, I’d rather man-up and deal with a little pain than be mean to the people around me and destroy my body. Depending on where you live, more natural solutions may be possible, use them, they work.

The scar that remains to this day.

Get your butt out of bed and go to the gym. You’re going to want to work out your entire body, focusing on the large muscle groups with compound lifts. And yes, you’re going to want to concentrate on the injured parts too: just do so safely. Be smart, listen to your body and don’t hurt yourself further. I started back this time barely able to bench the bar and had to add like 125 lbs of assistance in order to do a pull-up. But I was doing bench presses and pull-ups and using my body. And my body responded by healing itself.

Even if you have a cast on your arm, you can still work out your legs and use some of the back and ab and shoulder machines. Doing machine squats and other big lifts like that helps trigger body-wide, hormonal responses, building muscle and strengthening bone.

Eat super healthy, too. Give your body the tools it needs to repair the damage.

And just get out of the house and be active. It doesn’t matter if it takes you three hours to do something it took you thirty minutes to do before, you’re doing it and you’ll get a little better at it every time.

As you might know, or might surmise from the above, injuring yourself stinks. You really don’t want to do it. The toll — financially, psychologically, on your relationships and to your work — is more than you’ll ever know, until you’ve done it. So don’t do it. You don’t need to be the fastest guy on that group ride or get where you’re going precisely on time. Nor do you need to be the coolest looking guy at the party or save cab fare on the way home. Motorcycling is always going to be dangerous, it’s always going to be risky, but it’s a lot more enjoyable when you’re overcoming that danger and managing those risks than it is when you’re laying in a hospital bed.

Ride Safer: 10 Common Motorcycle Accidents and How To Avoid Them