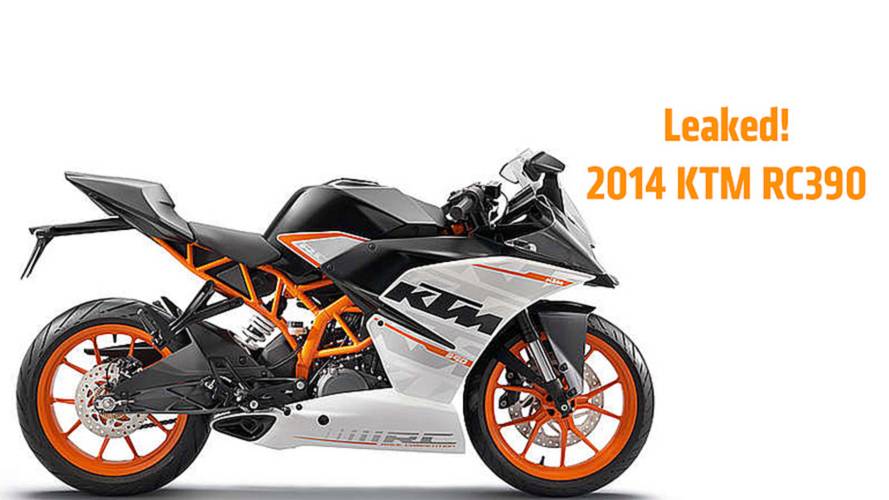 Full specs, details and photos of the highly-anticipated 2014 KTM RC390 have leaked, two weeks ahead of its scheduled unveiling at EICMA. The tiny sportbike weighs just 324 lbs (without fuel) and makes 43 bhp from its 373.2cc, liquid-cooled, single-cylinder motor.

I don't know about you, but I couldn't be more excited about a small, light, legit sportbike that doesn't sacrifice component quality in pursuit of an affordable price tag. Looking at the complete breakdown of this bike, that's exactly what I see here. This is finally the light, simple, affordable, but still honest-to-god sporty bike enthusiasts have been waiting for.

1. KTM says: "The brand new bodywork, footrests and pedals not only provide a unique supersport look but also help the RC to master extreme cornering by allowing a greater leaning angle.

We say: Separating the color into vertical and horizontal planes is sleek and futuristic. The RC390 doesn't look like RC8-lite, it looks better.

2. KTM says: "Equally lightweight as stable, the 17 in. orange painted cast light alloy wheels are fitted with grippy Metzeler tires - 110 mm wide at the front and an impressive 150 mm at the rear. The tires impress with tremendous grip in both wet and dry conditions, as well as providing supreme durability."

We say: Radial performance tires on a lightweight performance bike, this thing is going to kick butt!

We say: Looks like that plate holder bolts right off.

We say: That is a futuristic, purposeful face. The more we see of it, the more we want to own an RC390.

5. KTM says: "The brand new forged aluminum triple clamps are eye-catchers and together with the clip on handlebars guarantee a pure supersport racing feeling."

6. KTM Says: "ABS is equipped as standard on every RC 390, ensuring maximum safe on any road condition. When taking the RC to the race track ABS is of course disengageable."

We say: We love ABS brakes and, being able to switch them off for the track? Win, win. And just look at that swingarm!

7. KTM says: "The compact underbelly, three-chamber silencer is positioned close to the bike's overall center of gravity. This aids the centralization of mass and prevents accidental contact with the rider's and passenger's legs."

We say: Well, at least you can't see it behind the fairing.

8. KTM says: "As a special feature the RC incorporates blinkers into mirrors structure, which not just looks very sporty but also contributes to the perfect aerodynamics."

9. KTM says: "The state-of-the-art, liquid cooled, single-cylinder four-stroke 375 ccm engine with twin overhead camshafts, four valves and electronic fuel injection, already equipped in the Duke 390 provides outstanding power and thanks to the balancer shaft, delivers the highest level of smoothness. Because of the KTM-typical compact design with stacked transmission shafts the engine has an unbelievable low weight of 36 kg. Combine that with technical details like a forged piston, Nikasil-cylinder-coating and forced feed lubrication with power-promoting body-evacuation and you get an engine which provides a remarkable 44 hp. The engine is equipped with an electric starter powered by a 12V/6Ah battery."

We say: KTM did a great job of building a bike to A2-specs without dumbing it down.

11. KTM says: "In order to make no compromises in terms of supersport look the KTM engineers integrated the pillion seat into the bodywork lines so that it looks like a real racing bike tail, but ensuring excellent comfort for the passenger."

We say: The entire top of the seat is a nice-looking, heavily contoured pillion pad. Its thick, rubber-like material mimics the look of plastic bodywork. An epic solution for monoposto looks with biposto functionality.

12. KTM says: "KTM developed in cooperation with Brembo a powerful and easy to control brake-system which allows the rider to be always in control of the RC. A four piston radially bolted caliper in combination with a single brake disk (300mm diameter) in the front and a single piston floating caliper with a single brake disk (230 mm diameter) for the rear wheel guarantee excellent braking response even under the most extreme conditions."

We say: We're used to seeing a little more bling on KTM brake discs, but these Indian Brembo clones should still get the job done.

What else is coming next year? 2013 EICMA Preview