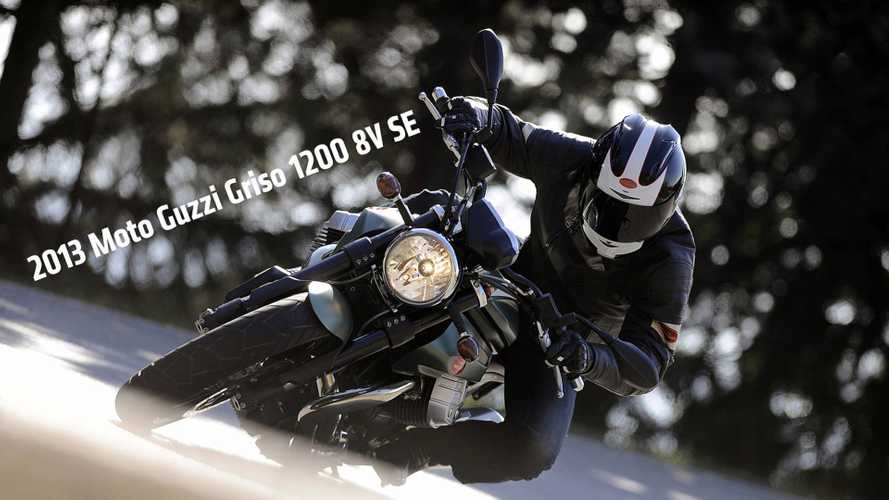 There's simply nothing else out there like a 2013 Moto Guzzi Griso 1200 8v SE. This review covers performance in town, on the highway and on good roads.

One of the best handling street bikes out there? Sitting on the heavy, low 2013 Moto Guzzi Griso 1200 8V SE for the first time and feeling the huge torque reaction from its agricultural motor might scare you off, but it shouldn’t. This is one of the most charismatic, unique and yes, capable motorcycles available today.

Dubbed “Black Devil” in Europe and not called that here for obvious reasons, all that’s new for 2013 is this black/silver paint scheme. That paint is accentuated with blacked-out mechanical components including the frame, motor, suspension and wheel hubs and rims.

The Griso was introduced at EICMA way back in 2003, eventually entering production in 2005 with the lumbering old 1100 motor. That bike had promise, but was held back by limited power and a difficult nature. Upon acquiring Guzzi in 2004, revamping the Griso became a top priority and, in 2007, it debuted the mostly new “8V” motor with 110 bhp, 80 lb.-ft. of torque and a revier, more compliant nature.

Reviewing that new bike, England’s MCN wrote, “The striking-looking Griso has been transformed from a lumbering yet evocative old-school roadster into a charging rhino of a motorcycle with true 140 mph potential.”

Looking at the Griso’s specs, you don’t see anything hugely remarkable for a high-end roadster. Like all Guzzi’s up to the new California 1400, the engine is used as a stressed member in the steel tube frame. That’s fitted with decent, if unremarkable fully-adjustable suspension and good brakes in the form of 320mm front discs with radial Brembo calipers. Oddly, the wheels are tubeless spoked wheels, at 17 inches they accept modern performance rubber, but that arrangement increases unsprung weight over the more common alloy design.

Perhaps it’s good, then, that the Griso is a heavy motorcycle — 489 lbs (dry) is 40 more than most superbikes add up to wet and full of fuel. That high weight repairs the sprung-to-unsprung weight ratio.

Rounding out the unpromising spec sheet is the 61-inch wheelbase, a full 5.4 inches longer than superbikes like Piaggio’s own Aprilia RSV4.

Didn’t I say this thing was one of the nicest handling bikes out there? Oh yeah, that’s thanks to one other facet of Guzzi’s awkward design archetype — a longitudinal crank. Because it doesn’t spin forwards, causing the engine reciprocal inertia to interfere with steering speed and feel, the Griso benefits from some of the purest steering feedback out there. Combined with its fat power curve and unflappable stability, that heightened feel transforms the Griso into a real weapon on real-world roads.

Hop on the Griso in town and you couldn’t be less impressed with it. The high weight, low seat, wide bars and strong torque reaction — it jerks violently to the right when you twist the throttle – lead to significant awkwardness paddling out of your driveway, turning 90 degree corners or trying to fit between cars.

Things get a little better on the highway, but the drastically long reach to the very wide bars splays out your torso and arms in an awkward uncomfortable manner that makes shoulder checks difficult and limits outright distance ability.

It’s not like the Griso is going to win any drag races. 80 lb.-ft. isn’t bad from an air-colled 1,151 cc V-twin, but it’s 13 lb.-ft. behind the latest air/water-cooled BMW parallel-twin and has to motivate a lot of weight for such a basic bike.

Nor does the powertrain lend itself to being thrashed. The two huge pistons feel very heavy and are reluctant to alter their inertia — up or down in speed — the gearbox is clunky, missing gears and jerking heavily if you attempt a clutchless shift and the shaft drive just accentuates those problems with its own heavy inertia and reluctant nature.

No, it’s not until you find yourself on a road with 3rd and 4th gear sweepers that the Griso can reveal its true character. Learn to short shift, riding the engine’s vast torque curve rather than chasing high revs, and everything smooths out. You can leave braking much later than you can on most other performance bikes, trailing them heavily to the apex in confidence, thanks to that abundant feel. The wide bars make cranking the thing over into corners effortless, then the long wheelbase holds your chosen line with utter poise and stability. Right here, in these conditions, there’s no better bike.

All the classic Guzzi character in a quality modern package that won’t leave you stranded on the side of the road.

Outstanding finish and build quality, the Griso feels much pricier than its $12,690 price suggests.

Heavy, large and awkward in traffic.

Pegs a little too low for really fast riding.

Torque reaction is severe and can make splitting through tight gaps a hair raising experience.

Ultimately not that fast, but also not applicable anywhere but a good back road.

“Riding around on this thing for a few weeks has me in love all over again: There’s plenty of torquey V-Twin power and sound without being obnoxious in a chassis reminiscent of a wide-barred old superbike with great suspension, in a mechanically honest package that’s as nice to look at as it is to ride pretty much anywhere.” — CycleWorld

“…outstanding steering at low and high speeds, not fast but precisely neutral and obedient, so the bike sweeps and flows along twisty roads and around mountain hairpins effortlessly.” — Kevin Ash

The Griso is a unique motorcycle, at a unique price point. At $12,690 it’s considerably cheaper than the $18,995 Ducati Diavel, while also being free of the cruiser stigma and riding position. A more direct comparison may be the lighter, faster $11,995 Ducati Monster 1100 Evo, but that bike lacks the Griso’s presence and character. The Triumph Speed Triple is around the same price at $12,799 and includes standard ABS, along with a considerably more powerful motor, tighter chassis and better suspension. Despite bringing its own unique character, the Triumph can’t match the Griso when it comes to charm though. They’re all very different bikes targeted at very different riders. We could see a Griso rider owning both an open-face helmet and a race suit with well-worn knee sliders.

All the old-world Guzzi charm in a high-quality, 21st century package that’s reliable, fast and compelling. The two-wheeled equivalent of wearing a tux to a ball game. The Griso is classy, desirable and utterly unique.

And a Smaller One: Moto Guzzi V7 Racer Record Review