How To Outrun The Zombie Apocalypse On a Motorcycle 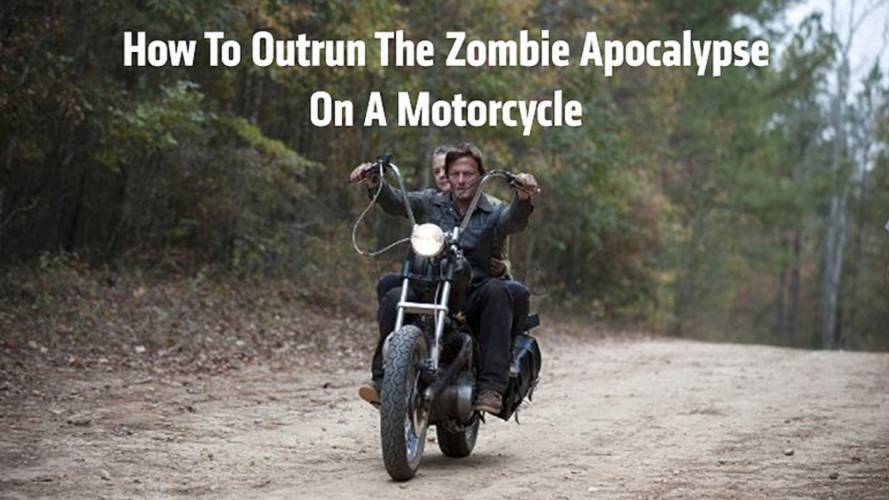 Undead clawing at your front door? A Hummer's just going to get stuck in traffic. Here's how to outrun the zombie apocalypse on a motorcycle.

As Norman Reedus has taught us through "The Walking Dead," a two-wheeled vehicle can be the ideal way to evade hoards of the undead and human survivors alike. Here’s your step-by-step guide on how to outrun the zombie apocalypse on a motorcycle.

Step One: Choose the Right Bike

In any sort of apocalypse scenario — zombies or no — transportation is going to be a major problem. I recall here the 1998 masterpiece “Deep Impact” in which (spoiler alert) Elijah Wood escapes through gridlocked traffic on a dirt bike.

You and I can learn a lot from Frodo’s choice — a simple, broadly capable, large-capacity dual sport.

In any disaster scenario, you’ll almost certainly be facing horrendous traffic as legions of drivers attempt to flee populated areas in their gas guzzling automobiles. Light, slim, easily-manageable dual sport motorcycles are an ideal lane-splitting tool; they’re capable of easily squeezing through gaps other motorcycle can’t and the tall, upright riding position contributes to both vision and low-speed control.

Now add in something a little more significant than just a traffic jam. An earthquake, perhaps? Those have been known to cause damage to road infrastructure, collapsing bridges, breaking water mains, felling power lines, and this is especially likely during an apocalypse. Suddenly, you need a bike that won’t be fazed by rubble, is capable of easily hopping curbs and which opens up the widest selection of alternate routes. We can’t recommend doing so for liability reasons, of course, but a single-track vehicle may be able to find ways through or over damaged roadways that a four-wheel vehicle never could. A four-inch-wide footprint means a bike can go pretty much anywhere you can walk.

Worst case scenario? A dual sport doesn’t need any roads at all.

Like Elijah, we’d go for one of the 650 cc, single-cylinder dual sports. They’re cheap, widely available, tough as nails and, should you ever be subject to an EMP attack, remember to run on carbs, not fuel-injection. 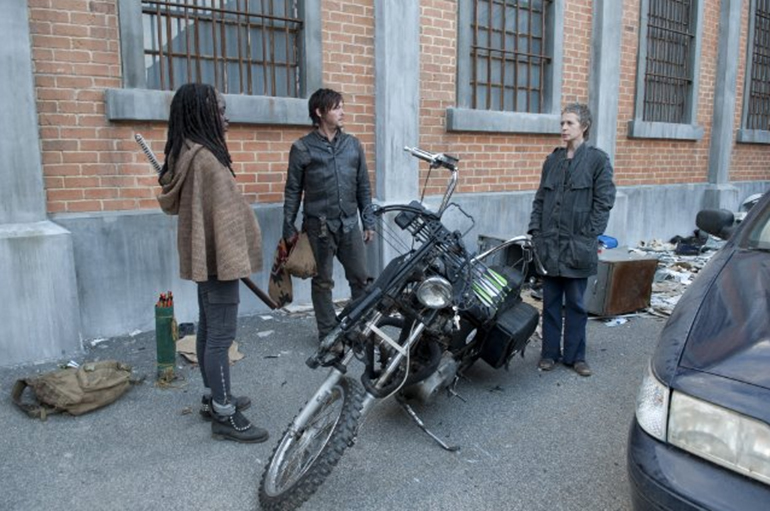 So the above dual sports are basic, cheap and capable. But, because they’re all such old designs, they also leave a lot to be desired by the zombie apocalypse prepper.

Because gas stations will likely be overwhelmed and will quickly run out of gasoline and, because siphoning fuel from another vehicle makes you stationary and therefore exposed, you’re going to want to give your bike a decent fuel range. With the exception of the KLR and its impressive 6.1-gallon capacity, all of the above bikes have tiny tanks and ranges limited to the 100-mile neighborhood as a result. Fortunately, aftermarket fuel tanks for all of the bikes above are widely available and easy to retrofit. We’d start our modifications there.

Next, we’d think about tires. Most of the above bikes come with “80/20” rubber, meaning they’re largely biased towards on-road use. Operating bikes so equipped for off-road can be dangerous and slow. We’d instead recommend accentuating their go-anywhere ability with a good 50/50 or even 40/60 tire. Just keep in mind that you’ll likely be carrying extra weight and potentially putting in big on-road miles.

Which brings us to our next modification: giving your bike the ability to carry stuff. This is a big limitation of many of this style of bike, often their subframes simply aren’t capable of supporting the weight of both a passenger and luggage. Luckily, exposed steel tube frames are easy to modify. Many bike shops are capable of welding on strengthening gussets or, if you know what you’re doing, it’s relatively easy to do so yourself.

You’ll next want to consider luggage. Kriega’s Overlander series is extremely versatile, giving you the ability to load your stuff into soft, waterproof bags, or bolt on Rotopax containers for extra fuel and water. Carrying both would be a good idea. But, hard aluminum panniers give you the ability to securely lock your supplies away, potentially advantageous should you need to leave your bike unattended. During an apocalypse, folks tend to have sticky fingers.

Lastly, you’ll want to fit aftermarket protection parts to the bikes, so they can crash and then just keep on going. Barkbusters should be first on your list, because they protect both the crucial levers and your hands. Next should be crash bars of some kind, protecting the engine and frame.

During a Zombie Apocalypse

Step Three: Take Only What You Need

Survival priorities in any scenario remain the same: Shelter, Water, Fire, Food. Prioritized in that order.

Shelter is dependent on region and environment. Pack a tent, bivvy shelter or the tools (and knowledge) to construct a shelter should you need one. The point of shelter is to regulate your body temperature, so clothing counts. Many a rider has spent a night in the Aerostich Motel; make sure you have adequate undergarments to insulate or cool as needed.

Water, you have to carry with you or find along the way. One gallon of water per person, per day is the required minimum for survival outdoors. We’d take enough for a day or two (space and weight make it difficult to pack more) and the tools to collect and treat found water. A long (10-foot) piece of quarter-inch rubber tubing can help you draw water from cisterns or similar difficult-to-access places, while tincture of iodine two-percent can be added at a ratio of two drops per liter, then allowed to rest for 15 minutes before making most water safe to drink.

**Note: during the zombie apocalypse water sources may be tainted with untreatable pathogens.

Take several different means for starting a fire. A lighter is easiest, but is subject to weather and damage. A ferro rod and striker can’t be broken and work in the cold, wind and rain, but may require a little knowledge to use. Also take fire starting material; we use Vaseline-coated cotton balls, which are incredibly cheap but more effective than commercial alternatives.

You’re not going to starve to death for about a month, but food can help keep you mentally alert, energized and warm. Protein bars or similar are an excellent source of emergency calories that store for a long time and aren’t really subject to damage.

Since you’re relying on a vehicle, you’re also going to want a basic tool kit to repair it, paying special attention to tire replacement. Spare tubes, tire levers, the wrenches you need to remove the wheels, etc. It’s probably a good idea to go ahead and fill your tubes with puncture-preventing Slime right now, before you need to rely on the bike for emergency transportation.

To that basic list, you may also want to add defense. While simply fleeing any potential threat remains the best way to exploit a bike’s benefits — speed, maneuverability — and ameliorate its disadvantages — the rider and passenger are exposed — you may want to consider carrying some sort of weapon. I’d go with the ESEE Junglas that arrived at my house last night. It doubles as a survival knife for processing firewood and building shelters, while its 16-inch reach should give adequate advantage over any zombie attackers. Whatever you choose, make sure it attaches to the motorcycle (you don’t want to fall onto a 16-inch knife in a crash) securely and safely.

When we interviewed barefoot survival expert Cody Lundin, he warned about the fruitlessness of simply fleeing a city, sans destination. It’s exceptionally hard to survive in the wilderness, unsupported, for more than a few days. And you simply can’t carry enough food and water on a bike to last more than a week or so. The solution? Have a destination planned and get there as quickly as possible.

Be it a family home, secluded cabin, boat, or cave, make sure it’s stocked with adequate supplies for you and to maintain/repair/service your bike. Extra gas is a great idea, but be aware that it degrades over time. Treat any long term supplies with an additive like Stabil.

If you’re Bugging In, rather than Out, a bike makes a great vehicle for reconnaissance and foraging. A battery powered radio can help keep you apprised of any Zombie troop movements, supply drops or off-limit zones in your area. Also, stay well away from the men with guns. Know multiple local sources for things like medicine, clean water and food and plan routes that avoid areas of danger. Because all the bikes listed above are very quiet as stock and because the way a bike moves through an urban area is impossible to recreate with any other vehicle, you’ll be hard to track. Maximize that quality by using circuitous routes to avoid leading potential enemies back to your location and remember to store your motorcycle securely out of sight.

You know what would really stink? Buying and building the ideal survival motorcycle, loading it up with supplies, then setting out for your Bug Out Location only to topple over and break your leg, then watch all your carefully-laid plans go up in smoke as Zombies consume your brain. Luckily, all the impact-reducing, anti-abrasion, anti-penetration, full-range-of-movement qualities of good motorcycle gear apply to fighting off voracious packs of the undead too.

A full-face helmet will protect your face, head and neck from bites (or the baseball bats of fellow survivors) just as well as it will against impacts with the road. A good Cordura or Leather (or similar) suit provides armor across your back, chest, shoulders and elbows, while providing a shell which should be impervious against teeth or claws and provide some protection against edged weapons. Sturdy boots give you solid footing, supporting your ankles as you bear weight on uneven surfaces while providing incredible penetration and impact protection for you feet and lower legs.

Even in a more mundane disaster scenario such as an earthquake, flood or nanobot rampage, emergency services and hospitals will quickly be overwhelmed and, even if they weren’t, the traffic and possible damage to roadways would drastically impact their response time. Keeping yourself safe from harm becomes even more important when the chips are down.

What's your plan to survive the zombie apocalypse?

How To: Ride Off-Road