10 New Motorcycles That Won't Ever Get Stolen 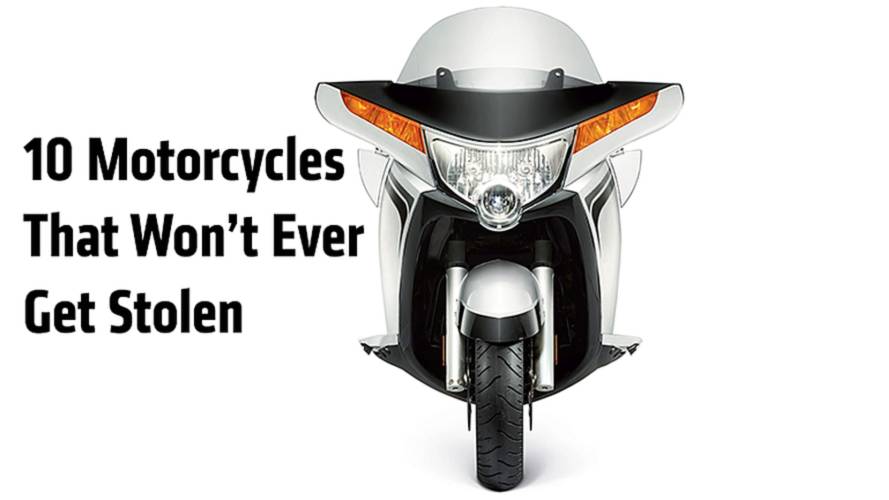 Live in a high crime area and don't have a garage? Here's 10 motorcycles that won't ever get stolen, even if you pin a 100 dollar bill to the seat.

Some bikes won't last five minutes on a city street unattended. But others can sit out there, key in ignition, "free motorcycle" sign on the seat, and never, ever disappear. What are they and why? Here's 10 new motorcycles that won't ever get stolen.

Why do thieves steal bikes? Three reasons: to ride them, to part them out and simply because there's an opportunity to. That means thefts center around bikes that are fun to ride — sportbikes, supermotos and dirt bikes — are crashed often, resulting in a high demand for parts — sportbikes, dirt bikes — or just bikes that are left vulnerable. According to the National Insurance Crime Bureau, 24 percent of all bikes stolen in America are Hondas, which makes sense as they sell the highest volume of sportbikes and dirt bikes. But, there's also demand for Harleys; 3,120 of those were stolen in the US in 2011.

What we can learn from those behaviors and statistics is which types of bikes are unpopular with thieves, which bikes they're not interested in and which bikes are simply too difficult to steal.

Why It Won't Be Stolen: At 904 lbs (curb) and 99.1 in. in length, the Gold Wing is an exceptionally heavy, exceptionally large motorcycle. Loading it into a van or a truck when you have the key and using engine power is hard enough. Without? We'd wager it would be impossible. While the Gold Wing is one of America's best selling motorcycles, owners like to upgrade, not replace stock parts, so there would by little value in selling, say, the standard shock on Craigslist.

Why It Won't Be Stolen: Another heavy, huge bike. Not only will one of these not fit into the back of a pickup or Econoline van, but tiny sales volumes and a passionate owner base means there's simply no market for stolen parts. Plus, they look like something straight out of World War II.

Why It Won't Be Stolen: Another heavyweight at 803 lbs and 2,300 cc, and another relatively rare motorcycle. Because the Rocket doesn't really share significant components with other, lesser, motorcycles there's limited demand for its parts. Too difficult to steal with little payoff makes this bike relatively safe.

Why It Won't Be Stolen: In revised, 8V form, the Norge is actually a really great sport tourer. But, those Dame Edna headlamps and bulbous styling do it no favors with either customers or thieves. It's a big ol' thing too, at 566 lbs (dry) and hails from a relatively rare brand. There's little street recognition of what it is, so thieves will just pass it by.

Why It Wont Be Stolen: The biggest ADV bike out there, it weighs 586 lbs and, when fitted with its plastic panniers, is several inches wider than a Gold Wing. Good luck getting this thing into a truck. Limited sales equal little demand for stolen parts.

Why It Won't Be Stolen: You guessed it, this thing is enormous. 869 lbs (dry) and 103.5 inches long. Good luck pushing this beast down the street, much less loading into another vehicle. To top it off, Victory has sold fewer bikes in its entire lifetime than Harley sells in one financial quarter, so there's just not going to be huge demand for one of those Buck Rogers headlights.

Why It Won't Be Stolen: See? It's not just heavy bikes that are theft proof. Honda's ubiquitous learner bike has been around largely unaltered since 1985 and, well, just doesn't meet the desirability standard necessary to make stealing one a compelling thing to do. There's so many of them out there, for such low prices, that you could likely buy an entire bike on Craigslist for less than the minimum payoff thieves require to justify the effort.

Why It Won't Be Stolen: Harleys do get stolen, but who'd steal a 1,157 lbs trike? I mean, what would you do with it after? Fence to to a drug dealer?

Why It Won't Be Stolen: Thieves who do not read RideApart have no idea what any of these things are. Also most of the ones on the road have exceptionally poor component quality. Think mountain bike, not motorcycle. We suppose some broke engineering students could find a use for the batteries and motors, but anyone else is just going to walk on by.

Why It Won't Be Stolen: Another huge, heavy bike (613 lbs). Add goofy scooter looks and non-motorcycle components into the mix and there's just no burning desire to use one to attack Range Rover drivers nor any demand for stolen parts.

The Numbers: What Motorcycle Theft Statistics Mean For You

Prevention Is The Best Cure: How To Keep Your Motorcycle From Being Stolen

From The Horse's Mouth: Ask A Motorcycle Thief