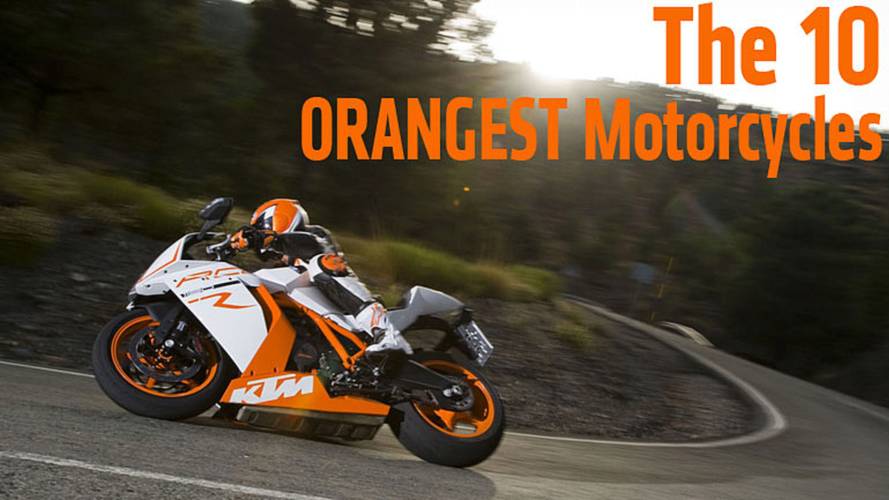 For those of you who love Halloween or just the color orange, we present to you the ten best and orangest motorcycles.

It’s finally Halloween, the real reason you own a KTM, and today is your day to ride it proud. If you own an orange motorcycle, it’s probably on this list with nine of its orange brothers and sisters.

The FZ-09 is one of our new favorite motorcycles, and Yamaha actually chose to do a run of orange ones after it received a large number of requests to do so (the orange version will be on showroom floors in December). You’ll be able to wheelie-attack Freddie Kruger a-la “I Bought A Vampire Motorcycle.”

The KTM 1290 Super Duke R is the most terrifying motorcycle in the universe. Ghosts and goblins quiver at just the site of its spec sheet and us mere mortals shake at the thought of holding "the beast's" throttle wide open.

Normally, we’re not big fans of special edition motorcycles, but nothing looks quite as cool or intimidating as a Repsol edition CBR600RR. Even the Headless Horseman will be able to see you coming, he just won’t be able to get away.

An off-road race bike with a license plate and signals? Sounds perfect for hunting werewolves. The 350 EXC-F is about as good as it gets off-road and KTM’s signature orange let’s everyone know you’re on the best there is.

Scoff if you must but, if we are going to ride a Harley, this is the one we’d want. Touring luxury at its finest, in a package that screams “Over The Top.” This is the bright red Ferrari of the cruiser/tourer world and it has you slipping out of parties with style.

We’re huge fans of the Tiger 800 XC and think it’s one of the best blends of off and on-road performance in the ADV segment. The orange paint acts as a safety orange vest for your bike, ensuring hunters won’t think you’re wild game next time you’re riding it in the middle of the woods. Chupacabra hunting anyone?

SMT stands for “supermoto travel,” two of our favorite things, here at RideApart. Zombies will turn and run the opposite direction when they see this one coming.

Ok, so this one may not be all that intimidating to any Halloween monsters, but the sorority girls at the Halloween party down the street will definitely be in to it. At only $2,895, the ACE is a rad little bike that’s great for new riders or just riding something cool around town.

I wasn’t drinking the orange kool-aid until I saw Jimmy Lewis ride his 990 Adventure Baja. It defied the laws of physics. Since then, it’s become one of my favorite bikes and the only thing I’d use to chase mummies across the desert.

We miss anything? What's your favorite orange motorcycle?

How To: Outrun The Zombie Apocalypse On a Motorcycle