6 Steps: How To Ford Deep Water On A Dirt Bike 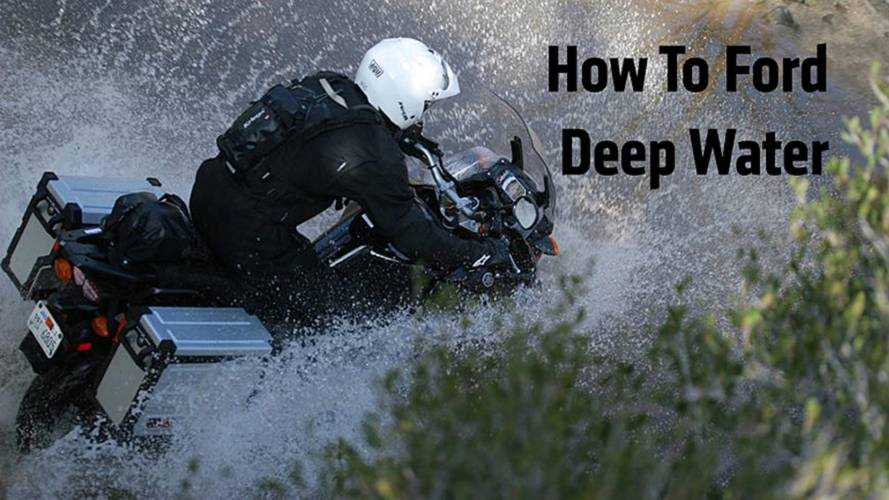 Want to get wet while you're getting dirty? Here's how to ford deep water on a dirt bike, step-by-step.

Splashing through a stream or a river on a motorcycle is about as fun as it gets. It’s easy too, here’s how to ford deep water on a dirt bike, safely.

Step One: Make Sure It’s Not Too Deep

New water crossing in an unknown area? Hop off the bike for a second and check it out. Make sure the water won’t reach your motorcycle’s air intake. You’d be surprised how low those can be on supposedly rugged motorcycles. The BMW R 1200 GS’s, for instance, are right on top of the cylinder heads, barely above foot height. Sucking water into engine is really, really bad.

Step Two: Evaluate The Bottom, Route And The Entry And Exit Paths

A good rule of thumb is, if a well-traveled trail crosses water, that crossing should be safe and doable. Take time to evaluate the conditions of any new water crossing, but pay particular attention to any that aren’t commonly traversed by bike.

Is the bottom of the stream/river/ocean/lake sandy, rocky or muddy? Sand shouldn’t cause much trouble, but precarious rocks can bounce you off course or even catch a wheel, flipping you over. Getting stuck in the mud, mid-crossing, would not be too keen either.

Also figure out how you’re going to enter and exit the water. Often, the trail will simply disappear smoothly into the water and reappear on the other side. On more difficult routes, you may encounter a vertical drop off a ledge or need to make a steep ascent up a difficult surface on your way up out of the water. Apply the same powers of deductive reasoning you would to any other terrain, just a little more conservatively since you’ll be dropping the bike into that same water if you blow it.

You’ll want to enter the water with enough momentum to carry you through to the other side, despite the drag of the water slowing you down. But, you don’t want to enter so fast you’ll lose control if you encounter an unseen obstacle. Depending on the bike and depth/length of the crossing, I usually try to hit the water at the top of 1st or 2nd gear. Say, about 30-40 mph.

Line yourself up so you enter the water straight up and down (wet stuff is slippery) and, if possible, pointing straight at the exit. That will make your crossing nice and easy. If the only route through is to take a turn mid-stream, point at the entry to that turn and try to maintain your momentum through it.

Step Four: Keep The Bike In Gear And Stay On The Gas

Don’t pull in the clutch or put yourself in neutral. Keep the bike in your chosen gear and keep the throttle open. If you find yourself losing speed, give the bike more gas. If you need to climb anything on the exit, give it more gas just as you reach that climb.

Stand on the pegs, but crouch backwards to take your weight off the front wheel. That will allow it to deal with any obstacles or climbs unimpeded. Same position as if you were braking hard (off-road) or making a steep descent.

Step Six: What To Do If It All Goes Wrong

If you feel a crash is inevitable, try and hit the kill switch before you go down. An internal combustion engine is basically a big pump that sucks in a fuel/air mixture, compresses it, then achieves power from the subsequent explosion. Water can’t be compressed, so if it gets sucked in, it’ll grenade your engine as the piston tries and fails to squeeze it. Oops.

If you have managed to hit the kill switch, but think some water has gotten into your bike, pull the spark plugs and cycle the starter. This should push the water out. Make sure it’s nice and dry in there and in the airbox/intake tract, then carry on your merry way.

There you go. Really, so long as you aren’t unknowingly plummeting into a deep abyss, splashing through water on your bike isn’t something to be intimidated by.

Get Dirty: 11 Tips For Riding Off-Road

On-Road: 10 Things You Need To Know About Body Position