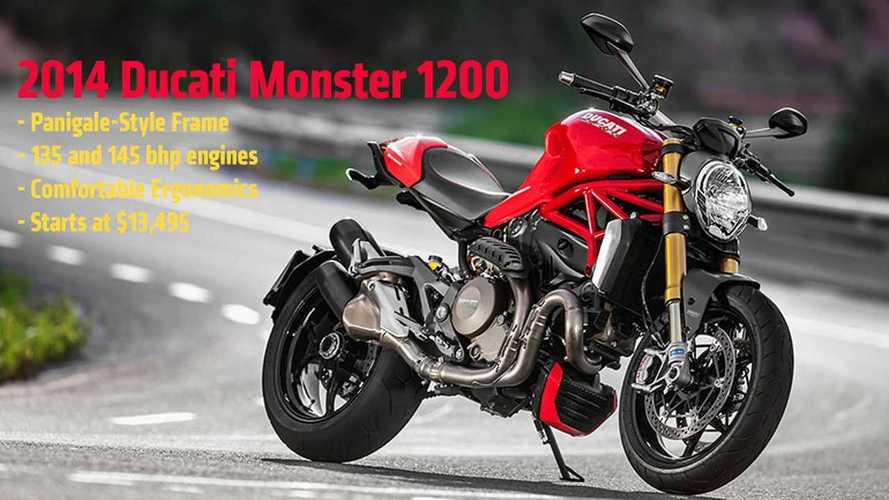 A naked Panigale? Not quite, but these all-new monsters do adapt its "frameless" chassis concept, transforming the archetypal steel trellis into a front subframe, only using it to attach the forks to the cylinder heads. A new, liquid-cooled, 1198 cc V-twin produces 135 bhp in the 2014 Ducati Monster 1200 and 145 bhp in the 2014 Ducati Monster 1200 S.

These all-new models are much more than just a big engine in a naked bike that defined previous high performance Monsters like the S4R. There's the new chassis arrangement, which shifts the trellis into a front subframe, bolting the rear subframe to the rear cylinder only and attaching the swingarm directly to the engine. A new version of the "Testastretta 11" motor which increases service intervals to 18,000 miles and even new styling, featuring a larger, more muscular fuel tank and smaller headlamp.

Ducati has targeted comfort and ride-ability over meaningless peak power figures, an approach which is reflected throughout the bike. The seat adjusts from 31.8 inches all the way down to 29.3 using a simple "block and pin" adjuster.

Ducati says, despite its new attachment method, that the steel trellis frame "has effectively doubled its torsional stiffness," thanks to wider-section tubes and a more optimized design. Compared to previous models, the wheelbase also grows by 2.3 inches in order to improve stability and make the bikes more suitable for carrying a passenger. In pursuit of that passenger carrying ability, standard grab rails are neatly integrated into the tail. Improving rider comfort and control, the handlebars are also 1.5 inches taller and 1.5 inches closer to the rider.

Further heightening the Panigale resemblance, the standard Monster rolls on identical-look wheels, while the S gains a new "Y-spoke" design.

Both models are equipped with comprehensive rider-aid electronics, including traction control, ABS and switchable power delivery modes. All that is controlled through a Panigale-like, full-color Thin Film Transistor screen.