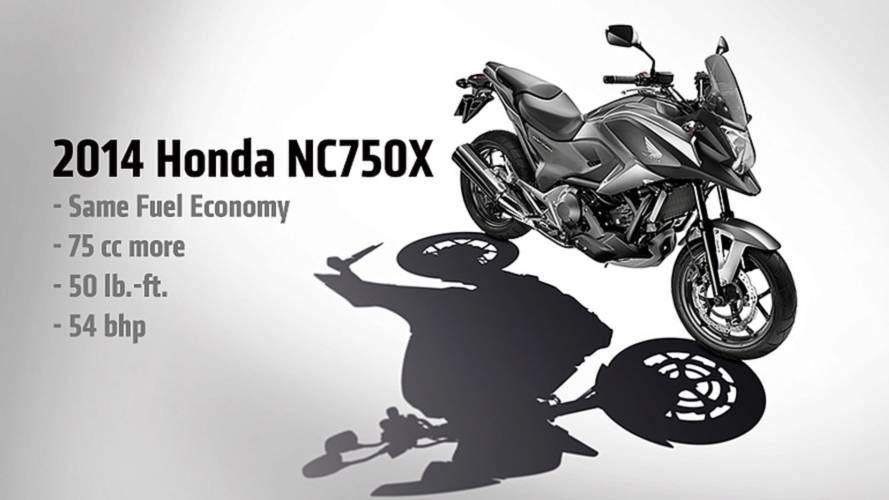 As exclusively revealed by RideApart last week, the 2014 Honda NC750X is growing in capacity to separate itself better from Honda's own 500 range. The larger motor adds 7 bhp and 6 lb.-ft.of torque, while the additional flexibility makes possible taller gearing for more relaxed highway cruising.

Honda's 2020 Motocross Lineup Is Here For You
⠀

The NC's motor is growing by 75 cc, taking it from 670 to 745 cc thanks to a 4 mm increase in bore, taking the engine out to a 77 x 80mm bore and stroke. Additionally, Honda is adding a second balancer shaft to reduce high-rev vibrations even further. Power increases from 47 bhp to 54 bhp at 6,250 rpm and torque grows from 44 lb.-ft. to an even 50 at 4,750 rpm. 90 percent of that torque should still be available from 1,500 rpm, giving the engine its unique, low to mid-range performance. Driven a Diesel car? The NC's motor feels similar.

As stated above, that extra capacity makes possible taller gearing. Ratios increase by six percent through gears 1-5, while 6th lengthens by 3 percent. This is carried out without negatively impacting acceleration. In fact, Honda says the new bike accelerates faster, despite the longer gears.

As on the 2014 Honda CBR300R, a new exhaust adds both back pressure and a sound that is said to deliver, "a more characterful beat."

Fuel economy should remain unaltered by the additional capacity. The NC750X is said to deliver 68 mpg in the typically more optimistic World Motorcycle Test Cycle, while the NC700X manages 64 mpg in the more conservative EPA test cycle.

As we told you last week, all-up wet weight grows 10 lbs to 482 lbs. Blame the balancer shaft and new exhaust. You won't feel that increase, the NC already hides its weight almost completely thanks to an exceptionally low center of gravity and very slim seat.

No word yet on American availability, but we'd expect the 750 to replace the 700 soon.