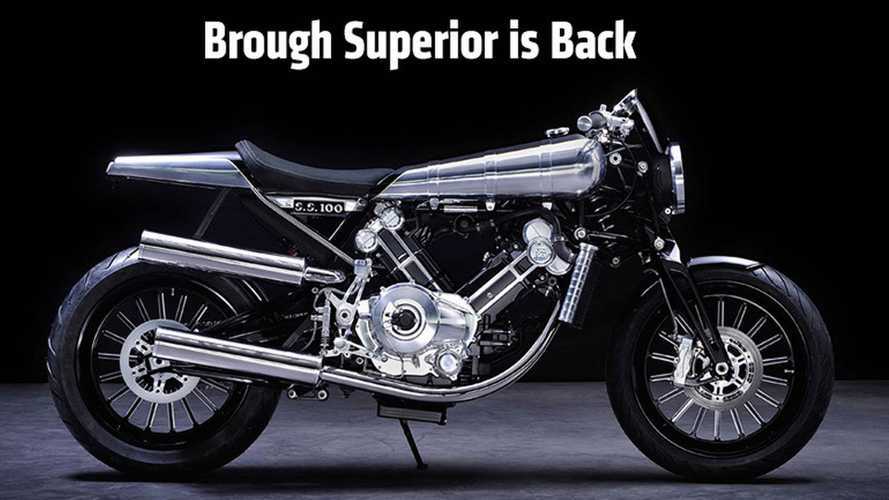 Brough is Back, baby!

Ninety years after the debut of the first SS100, Brough Superior returns with an all-new motorcycle modeled after it. The 2014 Brough Superior SS100 isn't just retro styling though, its performance is thoroughly modern. And it should be, because the company hopes to get close to $100,000 for each one it sells.

Advertised as, "The Rolls-Royce of Motorcycles," the original SS100 was famous for its performance guarantee. Each model left the factory having been ridden at over 100 mph by George Brough himself, hence the name. T.E. Lawrence famously rode an SS100. In fact, that's what he was riding during his fatal crash in 1935.

The most obvious styling cue adapted from old to new is the cylindrical fuel tank. But obvious inspiration is also seen in the V-twin motor and its exhaust layout, as well as in the girder front suspension.

That's not to say that the SS100 is a throwback. The 88-degree, liquid-cooled, 997cc V-twin serves as a stressed member in the steel and titanium trellis backbone frame and uses a horizontal-seal, semi-dry crankcase. It can be tuned to deliver anywhere between 100 and 140 bhp depending on customer specification, with the former presumably sacrificing outright power for greater flexibility. Making 92 lb.-ft. of torque, that flexibility should be generous.

Brough says that stressing the engine has helped keep weight down to a relatively light 395 lbs (dry).

Front and rear suspension is Ohlins monoshocks. The front girder is designed to separate braking and steering forces and is constructed from titanium triangles with aluminum-magnesium alloy legs. The swingarm is made from the same alloy.

The brakes were spec'd because they somewhat resemble old timey drums, but are in fact dual-discs clamped by radial calipers. The Beringer system uses a static central brake pad, with calipers pushing in from the outside. In addition to looking fancy, the arrangement is said to help reduce unsprung weight.

That's good, because Brough has curiously chosen to use 18-inch rims. Doing so not only carries a weight penalty, but reduces tire choice.

Brough Superior hopes to make 20 motorcycles a year, with deliveries starting in 2014. Considerably fewer than the 69 bikes George Brough rode to 100 mph in 1925.