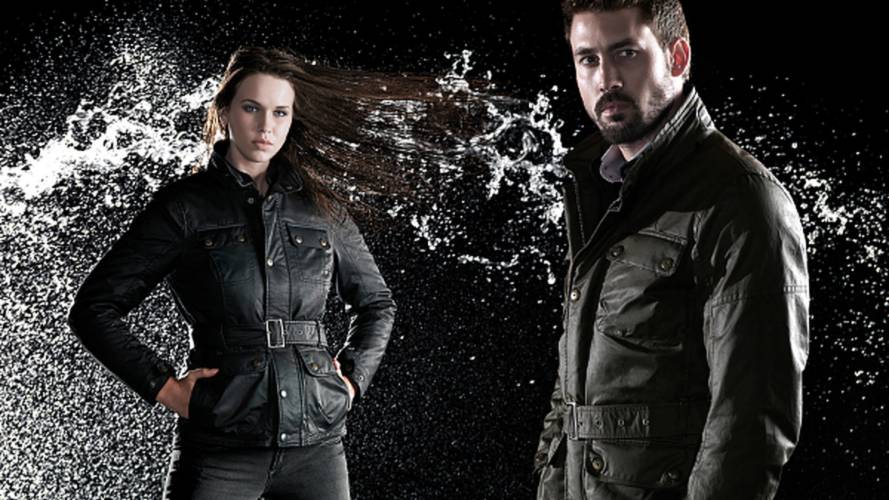 REV'IT Tailored Technology: A "City Collection" worth wearingA few weeks ago, I contacted REV'IT about getting some gear for a trip I'll be...

A few weeks ago, I contacted REV'IT about getting some gear for a trip I'll be taking/covering to Seattle in a few weeks and they were kind enough to send some stuff out (great gear by the way, look for a review once I get back). In the box was a magazine-looking thing entitled REVZINE I thought would be filled with some sort of news and I hoped to find somthing in it interesting enough to share with you. I got around to looking at it a few days later and, it turns out, it's basically their brochure for a new line they're doing called "Tailored Technology" and the stuff is absolutely fantastic.

At first, I only briefly glanced through it at what appeared to be a line of somewhat fashionable overcoats. The idea of any bike brand earning the kind of brand loyalty that it would require for someone to wear a REV'IT branded jacket when just walking around the street (like some asshat might with his Ferrari jacket) seemed really funny to me, but when I started to read the little paragraph about the jackets I realized these were armored motorcycle jackets and they instantly went from middle-of-the-road overcoats to the best looking motorcycle jackets I've ever seen.

I know what you're thinking, when are Wes and Sean gonna stop directing all of their focus to what biker jacket is the coolest, but that isn't the point here. These aren't cool in a skinny jeans/Hollywood/Wes-is-gonna-wear-it-while-taking-selfies-of-him-and-his-dog-so-you-will-tell-him-how-cool-he-is kind of way. This gear is cool in the I-commute-to-work-and-work-in-a-real-office-with-real-adults kind of way. Before the commenters freak out on me, I'm sure some, if not many, of you work in tech or ad sales or banking or accounting or law or some other field like that and wear whatever you want to and you don't care what they think because your a badass and blah blah blah. That's not the point.

The point is that the more people who buy bikes and use them for their daily life, the better. It decongests the streets, it changes the general perception of motorycles and the people who ride them, it encourages manufacturers to spend more money to develop better products, and then gear companies to spend more money to develop better and safer gear. The appearance and fit of the gear has been one of the barriers for people to get into motorcycling (again, not looking at those of us obsessed with the act of riding but looking at those who would consider it for commuting reasons). For the past few years, companies have finally been making gear that doesn't make you look like a power ranger. REV'IT took it a step further and is making gear that makes you look like someone who belongs in a professional environment.

"High fashion on the outside, high tech on the inside: that is the 'Tailored Technology' concept behind our new urban collection. Ride the city street looking fabulous, but safe in the knowledge that inside those good looks is the kind of modern technology and functional features normally found in high end dedicated motorcycle wear. You stay comfortable, safe and dry, and you look good doing it."

The only bad news is that we here in the U.S. are only getting 4 of the 13 jackets shown in the materials I received, but hopefully if we can create enough interest in the other items, more of it will come our way. The 4 pieces that we're getting aren't all that exciting (we've all seen Belstaffs before) but I could see my buddy who's an ad exec at Yahoo! or my other friends who work in San Francisco or New York wearing lots of the other pieces in the collection and not feeling like they looked out of place (something I'm told is a big deal in those environments).

The Melville Jacket is a stylish waxed cotton twill, Belstaff-styled jacket that comes with a detachable thermal liner. It has a Hydratex mesh G-liner (their own-brand waterproof membrane) and Knox lite CE protection in the shoulders and elbows. It comes with a compartment for a Knox Advance X CE back protector and has reflective paneling on the collar. The Melville comes in both a black and brown (I'm a big fan of the brown) and retails for $299.

The Gracia Ladies' jacket is the womens' version of the Melville jacket and also comes with a detachable thermal liner. It also has that waterproof membrane and Knox lite CE protection in the shoulders and elbows. It comes with a compartment for a Knox Advance X CE back protector and has reflective paneling on the collar. The Gracia Ladies' jacket comes in both a black and brown and retails for $299.

The Brera Jacket is parka inspired, thermal lined jacket constructed of an abrasion-resistant nylon. It also features hydratex lite and Knox Lite CE protectors in the shoulders and elbows, with a compartment for a Knox Advance X CE back protector and also has reflective paneling on the back of the collar. The Brera comes in black, marine blue, and dark green and retails for $219.

The Taksim Ladies' jacket is a 3/4 length parka inspired jacket constructed of polycotton poplin. It has a detachable thermal liner and the hydratex mesh G liner like most of the jackets in the lineup. I also comes with Knox Lite CE protection in the shoulders and elbows with a compartment for a Knox Advance X CE back protector. The Taksim Ladies' jacket has a reflective panel at the collar, a removeable hood, and removeable faux fur in the hood. It comes in black and dark green and retailes for $299.

"A bike offers you mobility and freedom: the fastest way to cross town is on two wheels. The intent behind our Urban Collection is to offer you the feeling of safety and comfort on your ride to work or meet with friends, and allow you to look hood when you get there. Style meets function for urband riders; the Urban Collection is designed specifically for urban use, protecting you on your trips around the city."

As I mentioned earlier, we aren't even getting the stuff that really shouted "urban commuter" to me. To understand why I really appreciate the direction this line is taking, check out the Avenue GTX Jacket, Monti Jacket, Opera Jacket, and Camden Ladies' Jacket and then have one sent from Europe or complain until they start carrying them here. Also feel free to let them know their site is a pain in the ass and that the photoshoot just looks silly.