The Supersport 600 Class: How Every Bike Differs 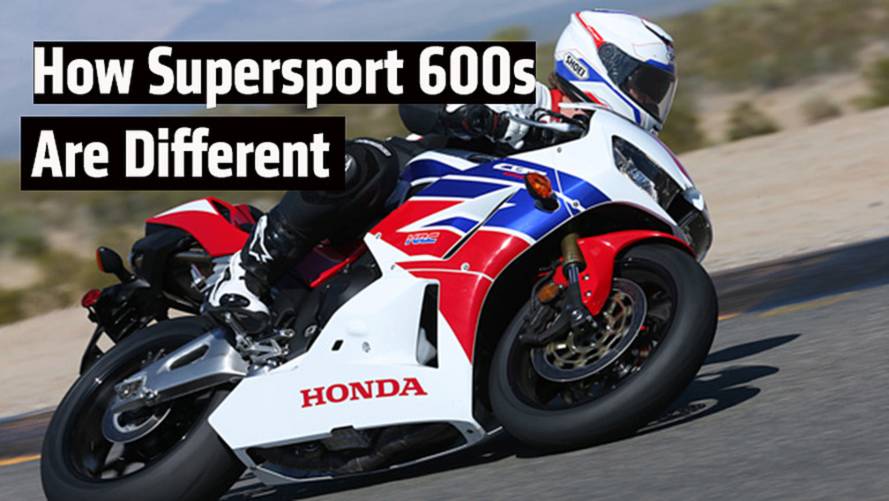 Wherein we explain the differences between different supersport 600 models then tell you which ones are the best and why.

If you like going fast on a motorcycle, then you want a supersport-class motorcycle. These are the bikes you can trash to their limits day in, day out, on a fairly reasonable budget. Here's how this seemingly too-similar class actually differs.

What It Does Best: Comfort.

What It Does Worst: Sex Appeal.

Why: Like going fast and can only/want only one bike? Then the CBR600RR is for you. You can ride it all day, then still be fresh enough to attack a good series of corners. It's just as fast as any of the other bikes listed here, handles just as well, but works in more environments, more of the time.

Who Should Buy One: Anyone interested in the sport of motorcycle riding.

What It Does Best: Smoothness

What It Does Worst: Image

Why: Sweet Gixxer Bro! Is there any other bike more saddled with the weight of squidliness than the GSX-R? Blame zero percent APR. It's a shame, because along with the CBR600RR, it's the most complete bike here.

What It Does Best: Win races.

What It Does Worst: Comfort

Why: Want to race supersport? Buy an R6 and call it a day. Seriously, we're not exaggerating, doing anything else is counterproductive. This bike was built to do one thing only — win races — and has developed a huge aftermarket as a result.

Who Should Buy One: Racers, canyon carvers, speed junkies, track day enthusiasts, you get the idea.

What It Does Best: Flexibility

What It Does Worst: Design

Why: Turns out that 36 extra ccs really does make a difference. The ZX-6R will pull a gear higher than anything else and it's the only 600 with both TC and ABS, meaning you can ride it harder more safely. But, you've really got to want a lime green bike to own one.

Who Should Buy One: People inflicted with high-side related anxiety. People who ride in the rain. People who are just plain tired of shifting.

What It Does Best: Handle

What It Does Worst: Reliability

Why: Slap top-shelf Ohlins suspension on a bike and you can't really go wrong. Well, you can if you spec too-heavy spring rates, which Triumph has. So either budget on new springs front and rear or pack on some pounds. If you can get the 675R working for you, it's brilliant, feeling far more exotic than any 600-class motorcycle has any right to be. But, owners tell us they're spending a totally inordinate amount of time getting warranty work done on these, so keep that in mind.

Who Should Buy One Trackday junkies and canyon carvers who weigh at least 200 lbs. Or, lighter enthusiasts who are prepared to invest some money in new springs. Recovering liter bike owners who want to learn how to ride properly again.

What It Does Best: Cheat

What It does Worst: Price

Why: Totally ineligible for supersport racing due to its superbike-like 899cc capacity, the little Panigale nevertheless seeks to conquest sales from the 600 class. It costs fifteen thousand dollars, but makes up for that with the full package of Ducati electronic rider aids and a 148 bhp V-twin. People who like riding rather than posing will buy this over the 1199, its shorter wheelbase, narrower rear tire and steeper rake make it the much sweeter bike. If you can afford it, this one's our pick.

Who Should Buy One: Puma shoe enthusiasts. Men who spend a suspiciously long time in front of the mirror every morning. Confident riders who want the best Ducati superbike going, but don't intend to use it just for the bragging rights.