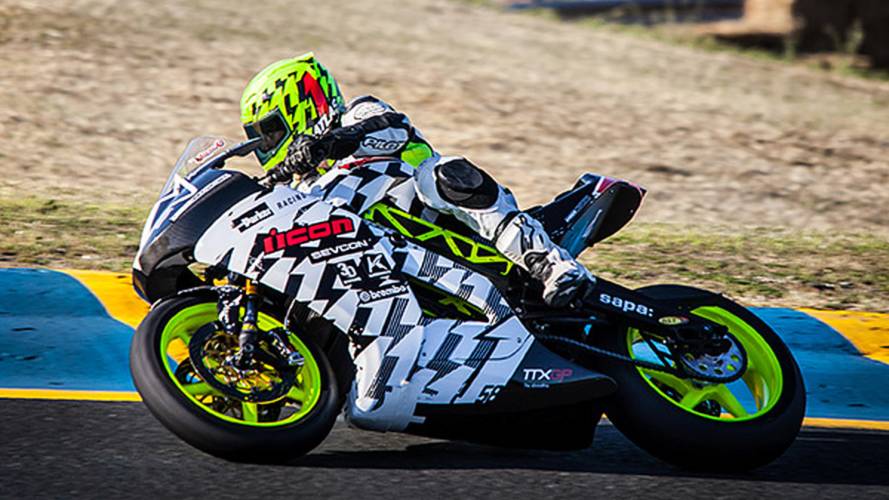 Electric motorcycle racing is no longer dividedUpdate: Amarok Racing's Michael Uhlarik comments. Since shortly after its rocky start at the Isle of...

"This partnership with the FIM clears the way for a single destination for all the world’s innovators to drive the next generation of technologies for competitive motorsport beyond the grid," states TTXGP founder Azhar Hussain. The partnership is a huge achievement for him, coming after five years of struggling against much larger entities, working with tiny budgets and facing huge resistance from traditional motorcycle racing fans.

The partnership will see TTXGP serve as the promoter of a legit FIM World Championship race series. It's going to take a little while to get there though: "The new series will initially be run as a World Cup and as a support class to other FIM Championships events. For the inaugural season in 2013, it will consist of four events in both Europe and the USA, and a Final in Asia. And for 2014, it will revert to a championship calendar with a minimum of six events over three continents. The next milestone of this new concept comes in 2015, when this FIM Championship becomes a headline event in its own right with a global calendar."

"From 2015 onwards, we expect to be running world’s first all-electric World Championship weekends across 3 continents as the main event. We are developing more content and classes and will be announcing deals with new partners over the course of the next 18 months."

The name of the new series and its 2013 calendar will be announced in the near future.

In another big development, the AFM will now allow electric motorcycles to compete on-track with conventional ICE bikes in classes determined by power-to-weight.

According to Cycle World, the move was brought about by Brammo, which wants to showcase the performance of its models in a way that's relatable to existing motorcyclists. The Empulse R and TTX will be eligible for lightweight classes, the Empulse RR will race against middleweigth 600s.

We reached out to HFL contributor and new electric racing participant, Michael Uhlarik for some perspective. He plans to enter his Amarok P1 in the new series, as soon as dates are confirmed.

"As a tiny, self funded electric motorcycle operation this news, long expected, is very welcome," the designer told us. "It means that we can legitimately communicate with potential sponsors for our racing efforts, while promising realistic returns in terms of exposure. The situation in electric motorcycle racing has been one of the proverbial chicken-and-egg: a compelling series exists that embraces the new energy paradigm, but there were no off-the-shelf motorcycles available to fill grids. As a result of this, and the enormous job of building your own even at the straight conversion level, meant tiny grid numbers, inconsistent racing action and tepid crowd response. The TTXGP / FIM merger legitimizes the series and makes getting sponsor money easier, which in turn will fund a much higher quality of race, motorcycle, and spectacle for everyone."

"Azhar Hussain deserves respect for pulling this off, because regardless of the bumps and delays along the way, it is a colossal undertaking to invent and execute any new racing series, never mind one that runs on four continents and dozens of nations, and one that provokes often irrational damnation. The doubters will continue to laugh, to point out the faults and deficiencies of electron powered motorcycles, but it does not matter. People have been racing since man was able to get up and walk, and racing machines since we invented the wheelbarrow. Electric motorcycles are not for everyone, just like cruisers or adventure bikes or tuned-up Honda Super Cubs aren't for everybody, but neither are they threatening gasoline power. They are just another genre of motorcycle. One that happens to be in ascension, and one that, globally, is responsible for generating more revenue than all conventional North American motorcycle sales combined."

On the new of AFM allowing electric bikes to enter, Michael says, "Amarok Racing is tiny, but we punch above our weight, so to speak. Since the middle of last year, we changed our strategy and focused on just making the best track motorcycle imaginable. We, like Brammo, are eager to square off with gas powered motorcycles wherever we can, and plan to do so informally at rounds near home (in Canada), and perhaps elsewhere as time and budget allow. 45 minutes flat out on a circuit is just about fun, power and speed, regardless of what drives your motorcycle. We hope that this rule change will help convince people that electron power is all of those things."