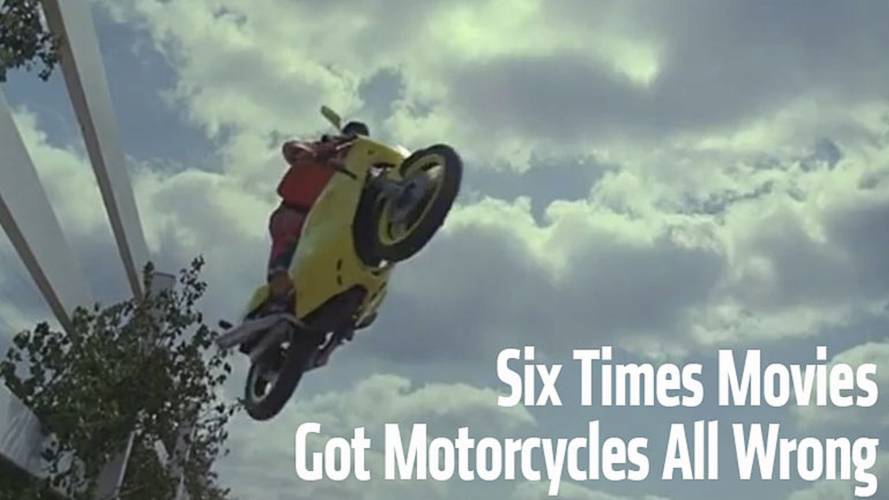 We all know that movies are not true to real life and we should not take all that we see at face value. Here’s six times movies got motorcycles all wrong.

We all know that movies are not true to life and we should not take all that we see at face value. But, there are some unusual ways that motorcycles are sometimes presented in films that often don’t really add up. Here’s six times movies got motorcycles all wrong.

For example, Terminator 2: Judgment Day shows John O’Conner trying to stay ahead of a suspiciously fast truck that’s trying to mow him down. Despite his dirt bike being hit several times from the rear, he still manages to hold on. In real life we’re pretty certain being hit that hard from behind by a tractor trailor would not see you staying upright.

James Bond may be the best secret agent in the Queen’s service, but we’re not sure how he gets to make the tires squeal on the BMW R1200C he rides in Tomorrow Never Dies. The only time motorcycle tires make that sort of noise is when you’re about to come to a sudden and very dramatic stop, as you’re locked up and very likely going to fall off.

Now, we all know that if you are going to jump a motorcycle, you really need a ramp. There is no other way to get airborne. Yet Vanilla Ice, in the film Cool As Ice, clearly has some special technique that gets him and his bike off the ground and over a four-foot fence with absolutely no trouble at all.

Sometimes, it’s not what filmmakers do with bikes, it’s how they make them sound in post film dubbing. If you’ve ever seen Michael Douglas in Black Rain you’ll know what we are talking about. He’s chasing a bad guy across a field and they’re both on what we think are two-stroke dirt bikes. Yet the sound you hear appears to definitely be four-stroke engines. Curious.

Tom Cruise (a repeat offender) plays a character in Mission: Impossible II that rides a motorcycle like no other person that we have seen before. Not only can he shoot the bad guys from the seat of his bike, he doesn’t even need to look around and instead uses his rear view mirrors. We’ll sort of accept that is unlikely but perhaps just about possible. What we can’t quite get our heads around is how his bike’s road tires change to off-road knobbies the moment Cruise hits the dirt. Is this some new innovation that we have missed?

Who doesn’t like the Matrix films? Great viewing and when in Matrix Reloaded Trinity gets to ride a Ducati that makes it even more entertaining. However, aside from having her pick of bikes on the back of a speeding transporter, Trinity gets a download sent to her that not only starts the motorcycle, but also removes all of the tie-down straps holding the bike upright. Crazy huh? Not to mention that the superbike then has trouble outrunning a Caddy land yacht…

We’re not bashing Hollywood here. In actual fact it’s good fun to watch any films with motorcycles in them and see if you can spot something that is not quite right. Have you got any films or clips to add to the list?