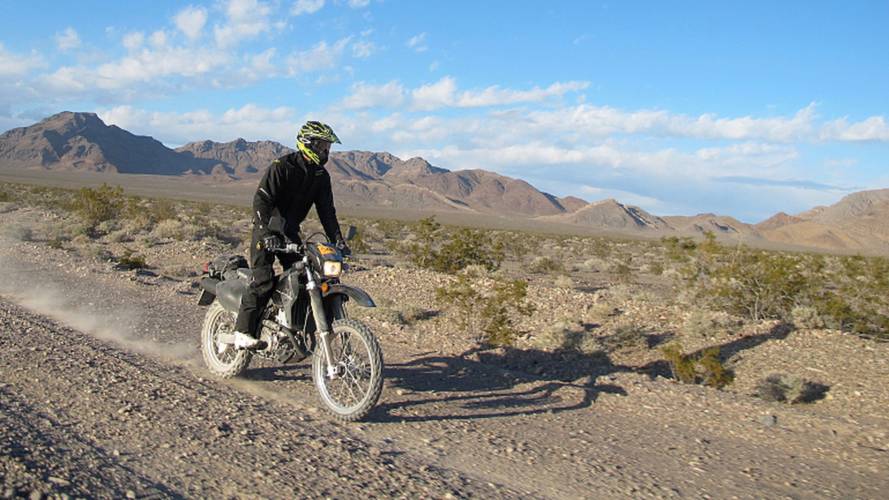 Taste of Dakar: Sean's gearMy attendance at this year's Taste of Dakar event wasn't solidified until about a week before we needed to leave, so I had...

My attendance at this year's Taste of Dakar event wasn't solidified until about a week before we needed to leave, so I had to assemble a setup based on what I could borrow, steal, and get on very short notice. Luckily, I was able to put together an ensemble that not only gave me full protection while doing the two-day ride, but also kept me warm enough during the late night highway miles on our way out to Nevada and cool enough when doing low speed drills mid day.

Bell was kind enough to rush me the Bell Moto 9 Carbon Hurricane Helmet. I really can't say enough about this helmet, it acheives a level of comfort and stability I didn't think possible from a dirt-bike helmet. The Bell Moto 9 shares the same new interior shape as the Bell RS-1 which means I knew it would fit me well. While Wes and our buddy Nick chose to ride in AGV AX-8's (with a face shield) for a more balanced approach to our half freeway/half dirt weekend, I opted to suffer through the highway miles for the added benefit of a true dirt helmet once we got to Nevada. I had no idea that the Bell Moto 9 would not only be perfect off road, but also handle freeway speeds as well as any of my fullface helmets (except that sandstorm and the free exfoliation it gave me). The best thing I can say about this helmet is that I plan on stealing Wes's all black version and making it my main helmet this summer. The graphics on it are actually really nice (for having graphics), but not my thing for day to day urban use. My only beef with the Bell Moto 9 helmet is that stupid magnet they use to attach the excess chin strap back to the helmet. It's a cool idea, but when you are wearing anything with a higher collar, it gets disconnected easily and flails in the wind. Other than that, this is honestly my favorite helmet right now.

No one was able to get back to me quickly enough so I ordered a pair of Oakley Pro Frame MX Goggles with an Iridium Lens per Brundy's advice from Amazon. Get Amazon Prime...seriously, it's the best for those last minute things. The goggles worked as I expected and either, other brands just suck and I've never had to experience it, or all goggles are basically the same depending on how picky you want to be. I will say I was super happy with the Iridium lens that came with these. I took a few rocks to the face and they don't have a single mark on them and they were perfect keeping the light toned down a bit while not decreasing visibilty. Johnny Cambell had some goggles that looked frameless that I might try and find just because I liked the aesthetics of them, but there's really no other reason the spend more than the $60 I did. My biggest beef with these is that they made everything look too awesome and I kept wanting to stop and take a picture because the light looked so perfect and beautiful only to stop and take them off and realize it was just the lense that made everything look so perfect. I never tried switching to the clear lense but from what Brundy says, Oakley's have the best and fastest system for that.

I have heard a lot about KLIM but had never had the chance to try it until now. Luckily, they were quick to respond and we decided that the Traverse Jacket/Pant combo would be the most appropriate, especially for the DR-Z400S I was going to be riding. The KLIM Traverse Jacket retails is at the low end of the KLIM product range and I was quite surprised when I opened the box at the quality of the materials and hardware on the jacket. The Traverse jacket is constructed of 840 Denier Cordura and is completely waterproof. It is just a shell and does not have any insulation, just a sweat wicking mesh liner, but does a great job at keeping the weather out. It comes with pockets for D30 armor, though I was using separate armor and left those out. The collar is covered in some sort of micro-fleece goodness that kept my neck comfortable and unchaffed despite my best attempts. The Traverse Jacket has full pit zippers and a zipper along the back to help the jacket breath when hot out. The products from KLIM are honestly far too technical to get into all of the specs and materials and stuff that, if interested, I suggest you watch the video overview by the guys at Revzilla.

Along with the Traverse Jacket, KLIM sent me the Traverse Pants as well. They are made from the same 840 Denier Cordura and have the same waterproof features. They are also just a shell and are lined with the same moisture wicking mesh liner as the jacket and they also come with little pockets to insert D30 armor. There were two things about the pants that really struck me as features that make them great. The first is that the inner part of the leg, from about mid thigh down, is lined with the really soft leather that was amazing at creating traction between my leg and the seat/tank of the bike. Often, with these cordura fabrics and fairly cheap stock seats, I feel like I am sliding around on the bike and this little forethought really helped with that. The other was the venting system on the pants. They really took in to consideration the riding position you are most often in when riding off road (standing). They have 4 vertical zippers, 2 on the outer front of your thigh and 2 on the outer rear of your thigh that, when standing, create a tunnel to funnel wind through while riding. I actually went riding with a few buddies in LA the day we got back from Dakar and it was warm that day and I was honestly amazed by how fast they were able to cool me down when I opened them up. As with the jacket, I suggest you watch the video above if you want to get into the specifics of the pant because it gets super technical and is hard to explain it all without a video and Anthony is cuter than I am so you might as well watch his.

As I mentioned, the KLIM Traverse Pant/Jacket combo comes with pockets for D30 armor, but I opted to use my own. Since Wes's gear came with armor, I stole the armor which saved him from the perils for of a Russian sidecar. This included the Alpinestars Bionic 2 Protection Jacket, the Alpinestars Reflex Knee Guards (discontinued), and the Alpinestars Bionic Freeride Shorts. All of which offered full protection and were incredibly comfortable. I was the most worried about the knee braces as I thought they would move around or chafe, but I honestly forgot I was wearing them til it was time to try and take my pants off. Wearing this stuff seriosuly makes you feel like a superhero and I just dont understand when I see dudes only wearing an armored vest or something.

One of the nice things about being part of a community of guys who ride is that their is usually spare gear lying around for stuff like this. I found a box of old gear in our closet and honestly have no idea how old the Alpinestars MX gloves I pulled out of it are. They weren't anything special, just well worn-in shorty MX gloves. I was trying to use some Powerlet heated gear this trip, but the DR-Z was having a hard time powering it and when it did, the gear would shock me or variate from burning my sking to completely off without my adjusting the controls so I just left it off. I did, however, use the glove liners it came with to put inside the MX gloves though for a little extra comfort and to help keep my hands warm.

I was unable to get boots in time for this trip, so I stole a pair of old Alpinestars Supertech R boots from my roomate (sorry!). While not intended for off-road use, they actually did the job quite nicely. They were supremely comfortable and their rigid frame gave me the support I needed.

Along with the Traverse suit, KLIM sent me the Defender Zip Shirt and Agressor Pant. The Defender shirt is a medium weight, micro-frid polyester blend shirt. I wore it for pretty much 4 days straight under my Alpinestars armor and it kept me warm when I needed, got ride of sweat when I needed, and was completely comfortable the entire time. I even slept in it both nights with the temperature dropping down into the high 20's/low 30's both nights. This shirt is perfect for a wide variety of temperatures and uses and is perfect if you only want to buy one base layer to do it all.

The Aggressor pants felt more just like compression pants than thermal underwear to me which means they were very comfortable, but not all that warm. My lower half usually stays warmer than my upper half so it wasn't much of an issue this trip, but I couldnt tell the difference between them and any other brands mositure-wicking, quick drying stretchy pants. I was grateful for the extra base layers and the added comfort they provided as a layer between my skin an the armor, but had I known how cold it was going to be I probably would have tried to get something a little warmer even to just help at night.