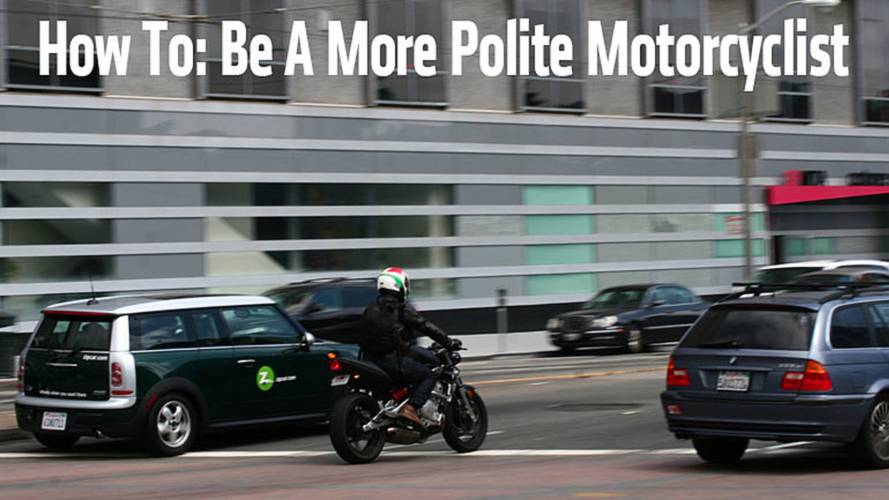 Learning to be a polite motorcyclists is not only good for your safety; it's good for preserving the rights and freedoms of our two-wheeled community.

I’ve been cut off, stopped short, merged into. I’ve been turned in front of, acknowledged then ignored, nearly clipped, definitely clipped, and (seemingly) left for dead. I’ve also been yelled at, honked at, cursed at, and flipped-off. Heck, that was just this morning.

I kid, of course. But if you’re reading RideApart, so have you. You’re the bad guy, and everyone knows it. With apologies to red-headed stepchildren everywhere, motorcyclists are the runts of the road. We get no respect: not from cars, certainly not from pedestrians, and especially not from trucks and busses.

As a rider, you should expect to be disrespected - it’s how you respond that separates the men from the mice.

It’s easy - and often, admittedly, fun - to approach motorcycling as an exercise in “Us Versus Them,” and cut a contemptuous swath through traffic with no concern or regard for anyone else on the road. But it’s also a self-serving approach that drivers often resent. And like it or not, they’re bigger than you.

Here’s the Dirty Little Secret no motorcyclist wants to admit: A fight with someone behind the wheel of a car is a fight you will probably lose. Sitting in traffic with a zillion other nameless faces, encased by iron and steel and pine-scented air freshener, drivers can afford to be pushy - all that anonymity and metal makes many of them very brave. But with only a thin layer of leather and (hopefully) CE-approved polymer separating us from the hard, painful stuff that surrounds us, courage is a luxury motorcyclists should never assume we can afford.

Look, we’re all on the same road, for different reasons. We’re all out there on the pavement together: riders and drivers, walkers and yes, even truckers. We’ve all got a schedule, a place to be. And yes, Rodney, we can all get along. The sooner riders and automobile drivers alike recognize each other’s right to exist in the daily ballet of rubber and metal and asphalt, the better off we will all be.

There are plenty of things motorcyclists can do to be a more polite, responsible motorist, and here are a few of ours. Everyone has the right to ride however they’d like - but keep in mind the things that frustrate you as a rider, and treat others the way you’d like to be treated.

Don’t put yourself in a position where you’re forced to respond to another’s actions. Those quick and sudden maneuvers so easy for us are precisely the kind of moves that freak out moms in minivans.

Watch the traffic around you and take note of how each vehicle is behaving. Avoid potential hazards and, if you can, get beyond them. Notice a swerving vehicle or brake jockey in your vicinity? You never know what that driver is dealing with. It could be a screaming baby in the back seat, or a text message or phone call that just can’t wait. He/she might be lost, or unsure of their next turn… it doesn’t matter. Whatever it is that’s preventing a driver from focusing on the task at hand isn’t your concern. Do not engage. Instead, use that nimble machine between your legs to extricate yourself from harm’s way.

How many times have you found yourself surprised by the move another motorist makes due to lack of a turn signal? On a bike, you’re out there in the open for everyone to see, and the only cushions you’ve got are your manners and your agility.

So use that vulnerability and exposure to your advantage. Especially in crowded traffic situations where everyone’s jockeying for position, always complement your turn signals with hand signals, as if you’re riding in a group. And never assume an adjacent vehicle sees your blinker; point, wave - whatever it takes. Leave nothing to chance.

You know those drivers who flip on their blinker halfway through a lane change? Don’t be one of those. A little blinking light does not give you permission to make your move. Head checks are free; always, always glance over your shoulder.

Loud pipes may or may not save lives, but there are myriad ways to get yourself noticed without setting off car alarms.

First, if you can wear light-colored helmet and/or jacket, it will only help your visibility.

Next, even if you make eye contact with a driver or pedestrian, never suppose you’ve been seen. In fact, assume you haven’t. Gesture, flash your brights - do something (or everything) to indicate your presence to others on the road.

A personal rule: After a particularly nasty crash in the Bronx a few years back, I habitually ride with my brights on during daylight hours. Now that I live in California where lane-splitting is legal, the practice has saved my stones at least twice.

Finally, keep in mind that many drivers are generally distracted. So just because the guy in front of or adjacent to you gave you a wave or a nod a moment ago doesn’t mean he realizes you’re still there. Let him know by showing up in his sightlines as often as possible. Get up next to (or beyond) the driver-side window. Adjust your lane position constantly, altering the appearance of your headlight in his mirrors. You can also gently blip the throttle once in a while. Just don’t wake up the neighborhood.

There is nothing more dangerous to a motorcyclist than indecisiveness; waffling will get you plowed faster than a pot farm at harvest time. Know your route, set your pace, and follow through on your actions.

Choose to abort a lane change at the last minute? The semi in the adjacent lane might already be moving into your space. Already signaled and begun your lean? Just make the turn; you can always spin back around. Decide to stop at a yellow light you’ve already gunned it trying to make? Mind your back; you’re on the verge of being a hood ornament.

If you screw up and miss a turn, no one has to know; that hot chick on the corner will only notice when you get t-boned right in front of her. Don’t clench the brakes or make any sudden swerves. Just curse yourself under your helmet, and flip around at the next corner.

Get Out of the Way

In traffic, there is little more frustrating than a driver who holds up the group, whether intentionally or not.

Accidents and lane closures notwithstanding, traffic is the result of too many vehicles in too small a space. The great thing about motorcycles is that they’re small and agile. So use that size and agility not only to your advantage, but to the benefit of everyone around you.

When merging, get up to speed and into the flow of traffic as quickly as possible, and settle into a speed-appropriate lane. Sure, sometimes it’s advisable to ride in the fast lane so as not to get surrounded by cars, but please - don’t hold up the line. If you’re being passed on the right, you’re not moving fast enough. End of story. Obstinately holding your ground and forcing drivers to go around you on the right pushes faster vehicles into slower lanes, and creates knots.

On one-lane roads where you want to soak in the vista, utilize turnouts. Even when riding a scenic byway, remember that we’ve all got different reasons for being on the same road. If someone’s tailgating you, wave them on by.

That’s five things you can do right out of the gate to keep things safe on the road. What other techniques do you swear by?

Motorcycle Etiquette: Get Off My Bike, Please

How To: Be an Expert at Commuting on a Motorcycle