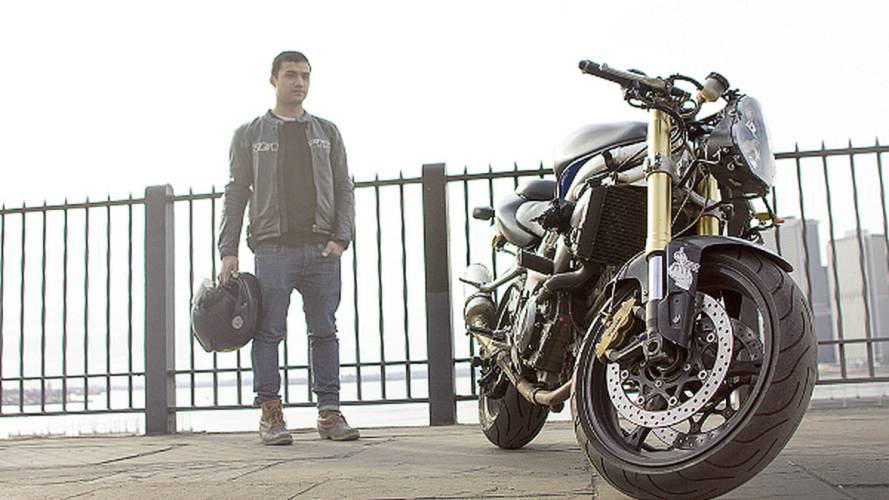 Real Rides: Kainoa's SV650Photos: Arturo Olmos A naked motorcycle is that has been stripped of its fairings, windshields and has an upright riding...

A naked motorcycle is that has been stripped of its fairings, windshields and has an upright riding position. They are designed for comfort and great handling. The Suzuki SV650 is a fantastic naked bike and Kai bought a SV650 as his first motorcycle because "it was cheap, not a sport bike, and an okay beginner bike."

Kainoa is a native New Yorker who grew up in downtown Manhattan. "As a child, I've always loathed walking and learned how to skateboard and ride a bike very early on." These experiences for Kai eventually lead him to racing bicycles for a junior cycling team. "I bought two mopeds in junior year of high school which I learned how to ride and fix." "That year, I eventually started looking for a motorcycle, my parents wouldn't let me buy one so I decided to do the mature teenage thin gand not tell them and do it anyway." "After watching a "how to ride a motorcycle video" I met the owner in Brooklyn and bought the bike." Kainoa rode off that day without a permit or a license and no insurance. His dad caught him a week later — his dad hid the motorcycle until Kai took the MSF course.

The SV650 without instruments.

Suzuki introduced the SV650 in 1999, as budget priced naked bike as a chance to get into the naked bike market. It turned out to be a hit due to its sporty ride and great handling. The V-twin's powerful mid-range torque, its light weight, rigid chassis, strong handling quickly became popular with new and experienced riders. Due to popular demand, a sportier version of SV650 was released for the US market in 200, the SV650S, and it has lower handlebars, higher foot pegs, bikini fairing and a windscreen.The first model of the SV650 started out with a 645 cc 64.2 horsepower that produced 42.3 foot pounds of torque and was later upgraded to 73.4 horsepower and 47.2 foot pounds of torque. It's all-round naked bike that does well in every category.

"As the bike was mostly stock when I bought it I wanted to make the bike more personal as well as perform better." "I wanted to do track days and ride twists so the GSXR front end was a necessary upgrade. The previous owner had an Ohlins rear shock so once the front was put on the suspension was set." Kai replaced the headlight with a KTM Duke headlight to " replace those ugly bug eye lights." "The old SV ignition didn't fit so there is an electrical ignition taped to the side of the frame." As the bike sits, it has no gauges or side mirrors nor turn signals so it can be raced.

"The V-twin offers so much torque all over the power band unlike the several sport bikes I've ridden." The GSXR front end paired with ohlins rear shcosk makes for a stiffer and responsive ride, even if I sacrifice comfort on NYC's rough streets. "With the agressive vortex clip ons and suspension the bike is no where as comfortable the BMW GS I've ridden and even the CBR600."

"In the future when I either crash or blow up the SV I would like to get a Street Triple R or Husqvarna 450SM."