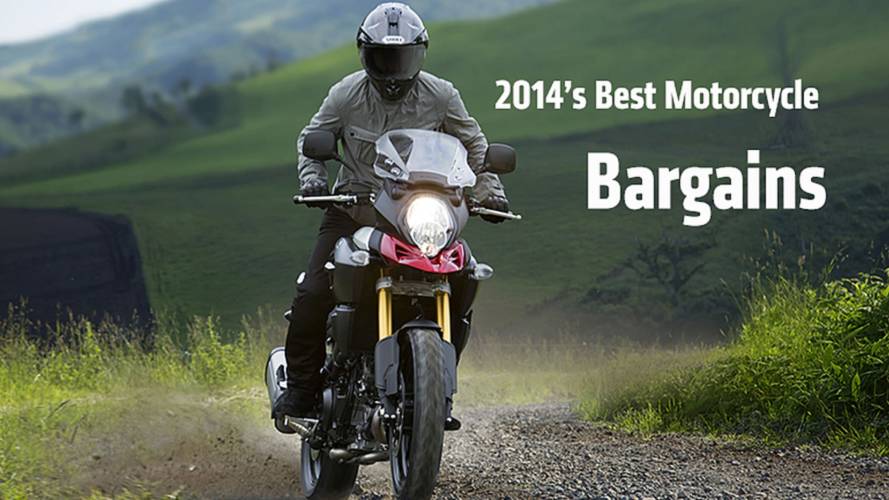 Shopping for a new bike in 2014? Here's the best motorcycle bargains you can buy based on performance.

Shopping for a new bike? You're in luck. You can now get a better bike than ever, cheaper than ever, with better performance. Here's 2014's best motorcycle bargains.

A 180 bhp, exotic Italian literbike for $14,000? The RSV4 R is one of the smoothest, fastest, best handling bikes out there and you can get it for cheaper than a Yamaha R1. Compared to that bike, it has smoother fueling, higher quality suspension, a more powerful motor and a real V4, as well as a superior electronic rider aid system. ABS is a grand more, but only really worth the upgrade if you plan on commuting.

Things aren't perfect in the FZ-09's suspension or fueling departments (a common Yamaha niggle), but you are getting a 113 bhp, 63 lb.-ft. triple for $1,400 cheaper than a Triumph Street Triple. A killer naked all-rounder, you could commute on the FZ-09 on weekdays, then scratch on it at weekends. Or on the way home... The choice is yours.

Or, if style is more you thing, the Star Bolt is superior to the Harley-Davidson Sportster 883 in every conceivable way, while retailing for over $400 cheaper. As a bonus, it also features massively superior build quality to the new 2014 Harley-Davidson Street 750, while only costing $490 more.

If you're like most people in the US and live in an urban area, you'll find this little Honda to be a superior, more practical ride than either the Suzuki V-Strom 650 or Honda NC700X. Combining little bike accessibility and flickability with big bike comfort and practicality, the CB500X has found a just-right formula that's equally brilliant in town, on a mountain road or slogging down the highway. We think it's worth the $500 premium over the CB500F for its more spacious riding position and surprisingly effective fairing, too.

Want a fast bike that can do it all? Commute, tour, luggage, passenger, maybe even a track day? The Ninja 1000 is probably the most versatile sport motorcycle on sale today, making pretty much any sport tourer look overpriced, overcomplicated and, now that it makes 140 bhp, making most of them look slow, too.

Sure, the 899 is more expensive than the faster RSV4 R, but it is also $3,000 cheaper than the base 1199 and is actually the better bike. If you want a Panigale, the 899 will not only save you money, but deliver sweeter handling, greater agility and a smoother, more exploitable engine. Making 148 bhp, it's not exactly slow, either.

Not only is the Street Triple R our absolute pick of the entire Triumph range (it's more fun on the road than even the Daytona 675R or Speed Triple), but it's probably the best buy out there if you want a fun, practical sport motorcycle for street riding. It also has superior suspension and fueling to the admittedly more powerful FZ-09. The Striple R really is just that much sweeter, making it an absolute blast to rider in town, in the mountains or even on track.

With a TL-based V-twin, the new V-Strom 1000 can run with any of the big ADV bikes, while coming in at thousands and thousands of dollars cheaper. Suzuki has maximized practicality and comfort with this new model, meaning it should hit a sweet spot for distance riders. If I was buying a new bike in 2014, it'd be this one.

Want a motorcycle that can stop anyone in their tracks? Want to be the fastest guy at a track day? Well, Erik Buell's newest bike will be both rare and, making 102 lb.-ft. of torque, incredibly fast. A rare, handmade, American superbike for under $20,000? Yes please.

On a budget and just want a practical, fun, cool-looking bike to ride around town? The CRF250L is near perfect within the confines of a city or, if you want to get dirty, you can bomb trails on it over the weekend. It's not the fastest bike out there, but it's so light, slim and easy to ride that you'll find yourself hustling this thing at a good clip.